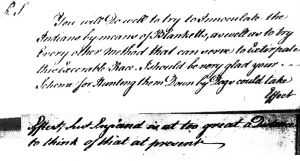 The SAE fraternity racist song — and righteous response of Oklahoma University President David Boren — has focused a lot of attention on campus racism.

But as more attention has focused on what a tradition this song — which invokes lynching positively — is, I realized as an Amherst grad I have no business scolding Oklahoma college students when Amherst college students and alumni still celebrate not just Lord Jeffrey Amherst — a key British general — but also his victory over the French and Native Americans, the latter accomplished by genocide.

This is part of Amherst’s fight song:

Lord Jeffrey Amherst was a soldier of the king
And he came from across the sea,
To the Frenchmen and the Indians he didn’t do a thing
In the wilds of this wild country

But for his Royal Majesty he fought with all his might
For he was a soldier brave and true
He conquered all his enemies whenever they came in sight
And he looked around for more when he was through.

This site, from which the image above was taken, shows Amherst affirmatively contemplating providing smallpox infected blankets to “inoculate” the Native Americans in the same breath as he considered hunting them down with dogs.

And yet Amherst students and alumni (including me) have sung this song boisterously not just in private houses, but in public stadia. This song is even more seared into my unconscious than University of Michigan’s “Leaders and Best,” by a good margin.

They should have ditched the Lord Jeff mascot when women were admitted in the 1970s. Instead, for 3 decades, women have been playing sports as the “Lady Jeffs,” which is pretty dumb.

There is finally a real move to ditch Lord Jeffrey, leading — just weeks ago — to a Lord Jeff information day to explain why he is so offensive. And yet students and alumni are defending the mascot (and, I’m sure that infernal song) based on tradition — the same kind of tradition, it appears, that has led to the longevity of the SAE pro-lynching song.

It’s really fun to beat up on some OU frat boys for their private racism, but the continued celebration of a man known for his genocide is no less offensive.