Details on the Pressure Cooker Dragnet 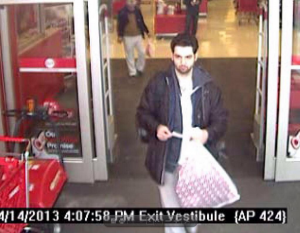 Tamerlan walking out of Target after having purchased the backpacks used in attack.

In this morning’s Tsarnaev trial testimony, FBI’s Christian Fierabend testified to the evidence about purchases leading up to the attack (h/t to CBS’s Jim Armstrong among others for the live-tweeting). As much as possible, he tried to show both GPS coordinates from one of the Tsarnaevs’ cars and some kind of purchase record for the the attack equipment (things like BBs, backpacks, and the remote car detonator).

Some of this was easy because a number of the receipts (such as for the backpacks used to carry the bombs) were sitting in Tamerlan’s wallet, which the government retrieved from Dzhokhar’s Civic at the Watertown scene. Some, such as remote controlled cars, were online purchases involving credit cards.

According to rather remarkable testimony, Macys has no  surveillance video of those purchases.

The government did, however, cross-reference the purchases to the Tsarnaevs through use of a portable GPS that was ultimately apparently retrieved from the Mercedes the brothers hijacked.

In other words, the implication is one of the Tsarnaevs or someone else used cash to purchase pressure cookers, which you would thing would be an attempt to hide the identity of the purchaser, but not only do it while running a portable GPS that tracked back to their Cambridge home, but then bring that portable GPS into the getaway car they hijacked.

That’s all the more crazy given that the last pressure cooker wasn’t purchased until March, and Tamerlan appeared to be prepping to die, given that he sent his mother $900 the day before the attack (unless she had funded the attack specifically). If you’re going to ID yourself with a GPS, then pay with a credit card and get it for free.

All that said, I’m cognizant Tamerlan left his wallet, with receipts, in the Civic, along with some other identifying documents, and also by carrying that GPS at least made himself appear to be the purchaser of the pressure cooker, whether or not he was. Tamerlan wasn’t hiding his identity.

And yet someone paid cash for the pressure cookers.

The one other nifty detail in all this is that if you also bought a Fagor Elite pressure cooker in this period, you’re likely to be in an FBI database until 2043.

Update: One more thing about the pressure cookers. There was part of a lid and a gasket from a pressure cooker at the apartment, which means there must be one more pressure cooker. That one, then, might be unaccounted by the purchase records evidence.

Update: Here are the exhibits from today’s testimony. Unless I’m mistaken, the government only entered purchase records from one of the pressure cooker purchases, the purchase of two from the Boston store on January 31, 2013 (this is the one they tied to the portable GPS device). So there should be two more pressure cookers — the second 6 quart one used in the race attack, and the one from which the lid and the gasket were taken in the Cambridge apartment.