Software Is Not Capital if You’re Not a Software Company 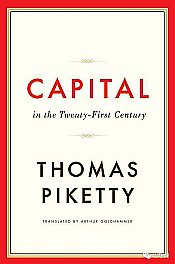 The Economist trumpets Thomas Piketty’s Capital and his theory, r > g, has had its first serious rebuttal, glowing like a proud parent over graduate student Matthew Rognlie’s work.

Mr Rognlie mounts three main criticisms of these arguments. First, he argues that the rate of return from capital probably declines over the long run, rather than remaining high as Mr Piketty suggests, due to the law of diminishing marginal returns. Modern forms of capital, such as software, depreciate faster in value than equipment did in the past: a giant metal press might have a working life of decades while a new piece of database-management software will be obsolete in a few years at most. This means that although gross returns from wealth may well be rising, they may not necessarily be growing in net terms, since a large share of the gains that flow to owners of capital must be reinvested.

Most commercial software used by corporations, including the example of database-management software, is licensed. Users are licensees, not owners.

Software doesn’t necessarily obsolesce, either. I’ve worked for businesses using software that was as much as twenty years old. Small businesses, in particular, can continue to run well on old accounting software, provided they don’t need highly granular reporting.

What does become obsolete is the hardware. If software no longer runs on an older system, or if it is no longer serviced by the licensor (ex: Windows XP), the licensee has simply reached the limit of the license.

This includes upgrades by software manufacturers for reasons of security improvements: if users don’t upgrade for improved security, they’re outside the limits of the license.

The only entities that might be able to claim software is capital are software companies. This might not even be the case if capital is limited to the licenses they’ve granted and claimed as assets — any accountant, tax attorney or IP attorney want to respond to this?

The confusion about software’s nature probably lies in our accounting and tax systems, which may treat software as an amortizable intangible asset. (Feel free to correct me in comments as I am not an accountant, nor a tax preparer, nor a tax attorney.)

Companies are also moving toward “software as a service” (SaaS), provided a license to access software on software providers’ systems. Microsoft’s Office 365, Google Apps, Salesforce.com are examples of SaaS. There are even further reductions in companies’ need for investment in hardware when subscribing to “infrastructure as a service” and “platform as a service,” like IBM, Amazon, and other technology companies offer.

These are contracted services — definitely not rapidly depreciating capital assets.

What exactly does Rognlie mean by “modern forms of capital” when his understanding of software is flawed?

I haven’t looked deeply at the rest of the arguments Rognlie offered as a rebuttal to Piketty’s theory. This bit checked me short, giving me concerns about his remaining points addressing returns on wealth, and on distribution of net capital income.

[UPDATE: Do read Ed Walker’s comment about this piece in The Economist.]