The NSL to 215 Collection: Data Flows AND URLs

Since last summer, I have been noting that majority of Section 215 production now consists of Internet data the government used to collect using National Security Letters but — after the Internet companies successfully refused compliance under NSLs anymore in light of an Office of Legal Counsel ruling limiting what could be obtained under NSLs — the government started using Section 215 to obtain.

The FISA Court imposed minimization procedures on this production, meaning it was fairly bulky. That led me to speculate — particularly given Claire McCaskill questions confirming Section 215 might be used for the purpose — the collection obtained URL search information. More recently, particularly when the FBI claimed (which, sadly, coming from the FBI can never be assumed to be true) it used Section 215 for cyber investigations, I became convinced it involved data flow records.

Meanwhile, in January 2014, Nicholas Merrill, the first person to fight an NSL order when he received one in 2004, started fighting to overturn the gag order that had been imposed on him a decade earlier (this came at the same time as President Obama claimed he would move FBI to end its forever gags on NSLs). And while the FBI agreed to let Merrill tell the target of the NSL about it, it ordered him to keep most of what he had been ordered to turn over secret.  He is currently permitted to reveal the following: 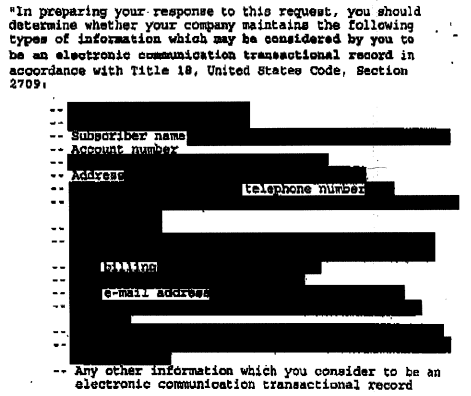 In other words, while FBI is okay with Merrill telling the target of a decade-old investigation he or she was targeted, he can’t tell us what — as far back as 2004 — FBI claimed was included under ECPA’s definition of electronic communication transactional records.

In December, Merrill sued to be able to tell us that. And on March 20, a redacted version of his declaration in that suit was released. While the government redacted what they had asked of him (and bizarrely, redacted language in his lawyer’s declaration that appeared unredacted in documents they included as exhibits; see this Cryptome document for the full packet), Merrill provided a pretty good sense of what might have been included in those 15 (of 16!) redacted or partly redacted orders from a decade ago. First, he described all the records he had:

Of all those 16 things, the only thing that should have been impossible to be included among the 16 requests the FBI made in its NSL demand on Merrill 11 years ago is the actual content of the client’s communication, item 10 (though see my caveat below, explaining that they may well have demanded that too).

In addition to describing the kinds of things he had — which therefore might be among the 16 things FBI demanded of him — Merrill described the kinds of things ISPs might have that the FBI might want. He includes URL searches and IP-based identifiers.

Electronic communication service providers can also monitor and store information regarding web transactions by their users. These transaction logs can be very detailed, including the name of every web page accessed, information about the page’s content, the names of accounts accessed, and sometimes username and password combinations. This monitoring can occur by routing all of a user’s traffic through a proxy server or by using a network monitoring system.

Web servers also often maintain logs of every request that they receive and every web page that is served. This could include a complete list of all web pages seen by an individual, all search terms, names of email accounts, passwords, purchases made, names of other individuals with whom the user has communicated, and so on.

And he described flow data — the kinds of things FBI might use in a hacking investigation.

Electronic communication service providers can also record internet “NetFlow” data. This data consists of a set of packets that travel between two points. Routers can be set to automatically record a list of all the NetFlows that they see, or all the NetFlows to or from a specific IP ,address. This NetFlow data can essentially provide a complete history of each electronic communications service used by a particular Internet user.

In short, Merrill is strongly hinting that he was asked for both URL information and NetFlow information. Merrill is hinting that the FBI was using NSLs to obtain detailed descriptions of all of the Internet activities for targets of NSLs.

Merrill also suggests that email subject lines — now considered content — might be demanded. That’s interesting because he got served his NSL before the hospital confrontation in 2004, and the government (specifically Michael Hayden) has claimed that subject lines were metadata, not content. So he may be indicating that back in 2004, the FBI was treating subject lines as an electronic communication transactional record (and given that FBI did not withdraw the substance of his NSL until 2006, perhaps continued to do so).

So back in 2004, at least, the FBI was making vast demands for records of all of a target’s Internet activity.

There’s good reason to believe that this is precisely the kind of production (at least some) Internet companies successfully moved to Section 215 orders in 2009. That’s true, in part, because in the NSL IG Report describing all the crazy requests FBI had been making under ECPA, the most substantive ongoing crazy requests appeared to be connected to AT&T production. Seven types of records from a provider that is almost certainly AT&T were redacted in that IG Report. So while it’s likely the FISC now reviews and minimizes that same kind of requests to ISPs as part of Section 215 orders, it probably doesn’t from telecoms.

That said, all that might change if the Cybersecurity Information Sharing Act passes. That bill would pre-empt existing laws, including ECPA, for sharing of cybersecurity, leak, or IP theft investigations (and can be used to investigate a broad array of serious crimes). So CISA would provide the legal cover for ISPs to share such information, at least for any ISPs who would “voluntarily” share such data. For that reason, we should look much more closely at the terms of that “voluntary” production.

For now, take Merrill’s declaration as pretty strong confirmation that the FBI at least was obtaining both URL search information and data flow information using nothing more than an NSL. Its desire to get such expansive data again is likely at least as pressing an issue behind current surveillance legislation debates as its desire to continue a dragnet of all our phone records.