Because I’m a hopeless geek, I want to compare the what we can discern of the November 2, 2001 memo John Yoo wrote to authorized Stellar Wind with the letter he showed FISA Presiding Judge Colleen Kollar-Kotelly on May 17, 2002. The former is almost entirely redacted. But as I’ll show, the two appear to be substantially the same except for small variations within paragraphs (which possibly may reflect no more than citations). The biggest difference is that Yoo’s memo appears to have two pages of content not present in the letter to Kollar-Kotelly.

What follows is a comparison of every unredacted passage in the Yoo memo, every one of which appear in exactly the same form in the letter he wrote to Kollar-Kotelly.

The first unredacted line in Yoo’s memo — distinguishing between “electronic surveillance” covered by FISA and “warrantless searches” the President can authorize — appears in this paragraph in the letter. 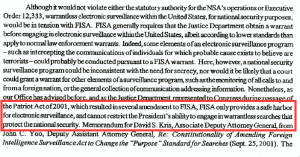 The line appears on page 7 of Yoo’s memo, but page 5 of his letter (which also includes some foofy introductory language for Kollar-Kotelly). That says there’s already 2 pages of information in Yoo’s memo that doesn’t appear in the letter. Yoo’s description of the surveillance program in the letter to Kollar-Kotelly is actually fairly short (and written entirely in the conditional voice), so there may be more of that in the actual memo. Also, anything that didn’t involve electronic surveillance — such as the collection of financial data — would not necessarily be relevant to FISC. But as I argue below, it’s also possible Yoo made claims about executive power in those two paragraphs that he rewrote as a two-page addition to for Kollar-Kotelly’s benefit.

The next unredacted passage in the memo consists of the first sentences of these two paragraphs.

They appear on page 9 of Yoo’s memo and page 7 of the letter, and it appears that the space in between the two is consistent — suggesting that the interim content remains the same.

The next unredacted passage appears on page 12 of Yoo’s memo, page 10 of the letter. 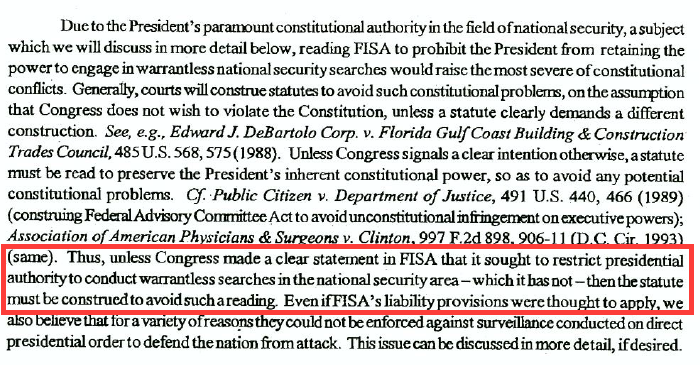 While the general pagination still seems to be roughly tracking (again, suggesting the interim content is at least similar), the spacing of this paragraph is clearly different (note how the sentence begins in a different place in the column), suggesting Yoo may have made an even stronger defense of inherent authority in his memo, or perhaps that OLC has precedents for such a claim that Yoo thought inappropriate to share with the FISC. It’s possible this and later paragraph spacing differences arise from classification marks at the beginning of each paragraph, except the passages from the beginning of paragraphs seem to match up more closely than those from the middle of them.

The next unredacted passage, on page 17 of Yoo’s memo and 15 of the letter, extend the claim that Congress can’t limit the President’s use of pen registers used to defend the nation. That’s followed closely by Yoo’s shift to arguing that intelligence gathering “in direct support” of military operations does not trigger the Fourth Amendment.

Again, the pagination of both line up. But as with the discussion of Congress’ ability to impose limitations with FISA, the discussion on pen registers appears to have different spacing within the paragraph.

This citation, from the 1995 Supreme Court decision in Vernonia School District, is the next unredacted passage.

Here, the pagination of the two documents remains close — the line appears on the bottom of page 19 in Yoo’s memo but near the top of page 18 in the letter — but it’s possible there’s somewhat less content in the memo at this point than the letter. And again, the spacing within the paragraph seems to be off slightly.

Two pages later in both documents (page 21 of the memo and 19 of the letter), the quote from Haig v Agee,  which the executive always uses to assert expansive powers for national security, appears.

Though once again, the spacing within the paragraph appears slightly different.

That’s the last unredacted passage of Yoo’s memo. The memo released to the ACLU under its EO 12333 FOIA reveals there are 3 more pages to Yoo’s memo (for a total of 24). That would suggest that the remaining body of the documents were, at least, close in length.

That is what the letter has as well. But in addition to the letter, DOJ released an unexplained 2 page description of “Authority for Warrantless National Security Searches” that does not appear in the Yoo memo as far as we know. So the Kollar-Kotelly letter is 22 pages, plus the 2 page addendum, whereas the memo is 24 pages, apparently without it.

Which says one obvious explanation for the difference in length is that Yoo replaced two pages of content from his memo with the two page Authority document.

Half the two-page Authority document deals with citations in Keith, the Supreme Court decision requiring warrants for even domestic security wiretaps; it effectively does this to suggest Keith was more supportive of warrantless wiretapping than it was. The other page treats more recent decisions, all except Congress’ decision to include physical searches in FISA, pre-dating FISA. Some of these citations are even repeated in the letter (so presumably in the memo). It seems, then, that these two pages are a special interpretation of past actions to interpret them as saying something different than they do. (As I’ll note in a future post, the Keith gymnastics are particularly important.)

But I’ll add one more thing. The fact that Yoo had claimed the Executive could ignore the content of EO 12333 first became public when Sheldon Whitehouse got language from the memo declassified in 2007 and read it on the Senate floor (he specifically refers to memos, not letter, so it’s presumably from the November 2, 2001 memo). But Whitehouse also got two more claims declassified at the time:

I believe the second claim — that DOJ is bound by the President’s legal determinations — refers to a note that Alberto Gonzales sent DOJ after the hospital confrontation. But the first — that the President can determine what is a lawful exercise of his own Article II authority — has not (as far as I can think of) since been made public. So I think it’s possible that the two pages of the memo that don’t exist in the letter might make such a claim (which would in turn justify the October 4, 2001 decisions to authorize the program). In which case, when Yoo was rewriting it to make it palatable to a judge who otherwise might balk, simply rewrote those two pages to make them appear reasonable so long as no one got to review it closely. That’s just a guess, but we know we’re looking for 2 pages of content written by Yoo in 2001, and I believe we’re still looking for the claim that the President can determine whether his own actions are legal, so it’s possible the claim is in those two pages. And some of the later Article II claims that appear in the letter (and the memo) would make more sense if Yoo had made such a case for Article II authority in those missing two pages.

If I’m right, though, it would suggest that DOJ’s claim that it cannot release the November 2, 2001 memo is an effort to ensure those two pages don’t become public, because all the rest has already been made public (in only slightly redacted form).