The Day After Election Day 2016 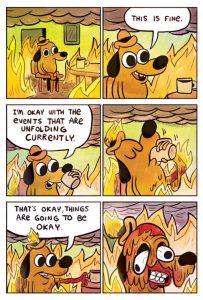 Well. I don’t know that I have adequate words for this ‘day after’ experience. I didn’t in 2000 or in 2004; why should this be any different? As I write this and schedule for publishing, I don’t know the final outcome of the big race — but the entire day has been bad and it looks grim at 2:00 a.m. the day after.

Watching this evening’s coverage by major TV/cable news networks has been an appalling joke. They even appeared to realize they were flailing, producing occasional weird spots of dead air when one of the talking heads couldn’t articulate what’s going on.

It’s rather pathetic that the only person who went there and touched on the difficult topics of voter suppression, racism, and sexism, did so on a comedy program. The rest of the mainstream media muddled on blithely as if these things don’t exist and didn’t affect this race. They are doing exactly what they’ve done for decades, pretending everything is fine, this is fine, it’s all fine.

Speaking of fine, here are a few bright spots:

If I missed another bright spot, leave a note in comments.

This is an open thread, but it is dedicated to post-election discussion.