The Hashtag DrainTheSwamp and the Structure of Trump’s Power 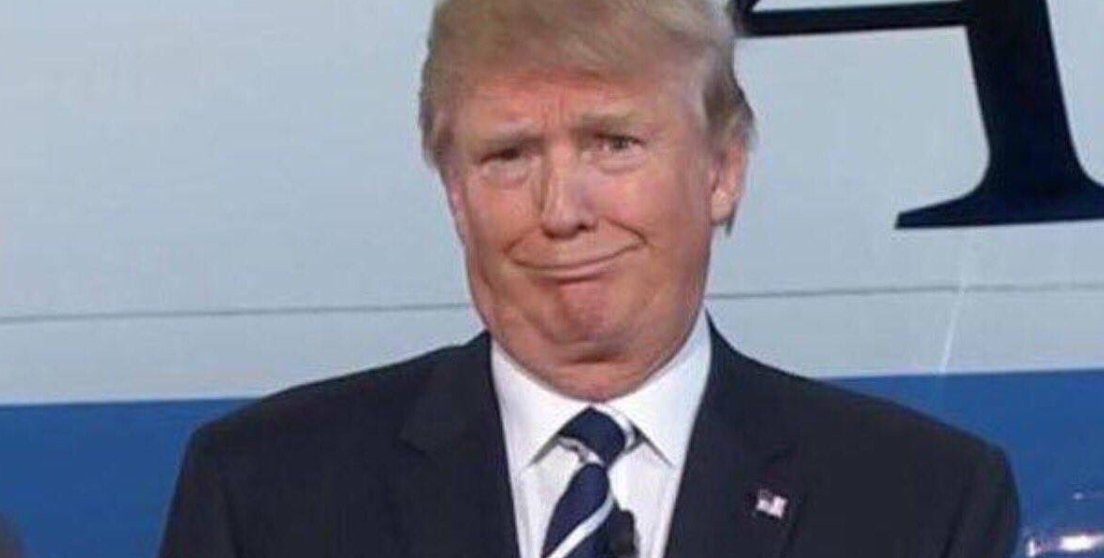 I’ve been a bit of a Debbie Downer on the Twitters of late, because I’ve been nagging people about anti-Trump humor.

It started weeks ago, shortly after Trump called the press into Trump Tower and scolded them for what he argued was unfair coverage during the campaign. He complained, especially, about a photo NBC had used emphasizing his double chin.

He also complained about photos of himself that NBC used that he found unflattering, the source said.

Trump turned to NBC News President Deborah Turness at one point, the source said, and told her the network won’t run a nice picture of him, instead choosing “this picture of me,” as he made a face with a double chin. Turness replied that they had a “very nice” picture of him on their website at the moment.

That led to a slew of people spending hours tweeting around memes of the photo. 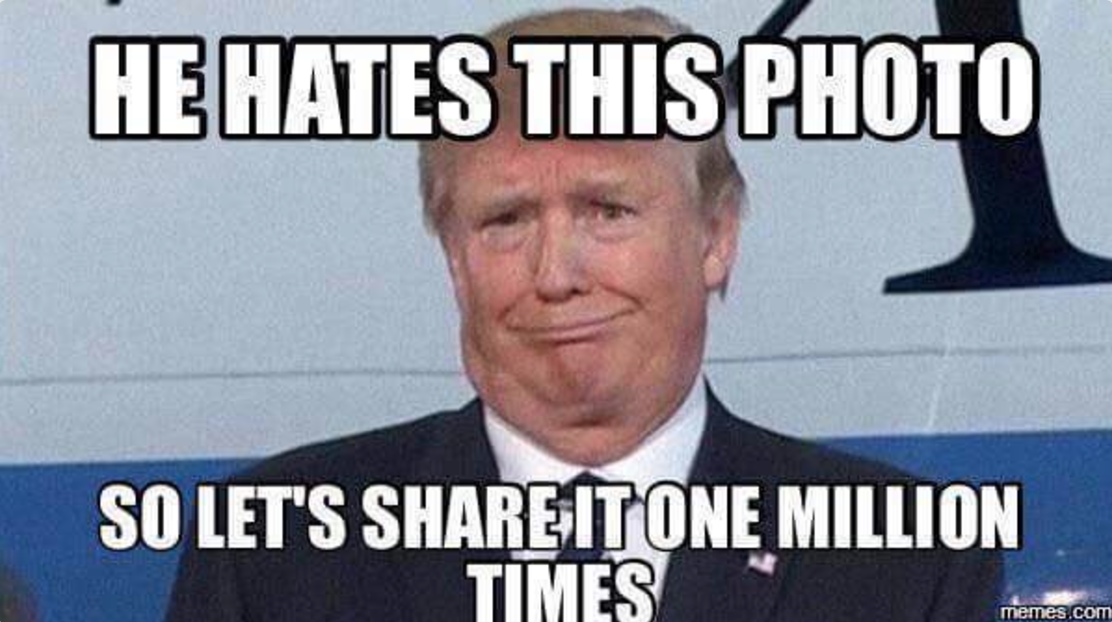 I responded by asking what the theory of change behind it was. How would tweeting an unflattering photo of Trump help Democrats move towards winning back power? How would it prevent Trump from pushing us into fascism?

Given how humor works, it probably would have the opposite effect. Humor functions to create a community — those who find something funny, because they know the cultural references and find the upending of them to be amusing, are on the inside; those who don’t find something funny are on the outside. Trump’s supporters back him because he’s their vehicle to punish the snobs who call them “deplorable.” Indeed, even a Hillary campaign staffer believes the use of the term “deplorable” is when Hillary lost the race.

Every time those snobs laugh at Trump, it reinforces the reason why supporters (some portion of whom are Obama-to-Trump voters) support him. Because they’re tired of elites laughing at them, especially elites with a long history of catastrophic failures.

The same dynamic happened with the fun many had with Trump’s misspelling, in a rash tweet attacking China for taking our “research” drone, of “unprecedented” as “unpresidented.” 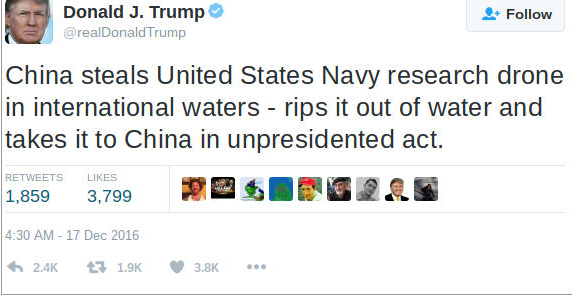 I get that the neologism is actually quite hysterical, a totally apt label for Trump, one I suspect will stick for good reason. But especially in a venue where Trump voters will interact, to make fun of Trump for doing something very human is, in my opinion, pretty counterproductive. Again, lots of people derive a sense of resentment from others making fun of them for speaking funny or improperly; Trump channeled that resentment in part because he speaks more like they do, gaffes and all. The counterproductivity of making fun of the spelling is all the more true given that the substance of the tweet was actually fairly important.

So I’ve been trying to refrain (with admittedly varying degrees of success) from mocking Trump on Twitter. Calling out his hypocrisies? Sure. Mocking certain Trump surrogates? Why not? But reinforcing the sense of resentment that is the primary engine of Trump’s power? Counterproductive.

There are two exceptions of note however. The first is reminding people that Hillary won the popular vote. As it is, 52% of Republicans believe Trump won the popular vote. To the extent it will help, disabusing them of the notion that they, Trump supporters, are a majority in this country is an important step to undercutting his claim he has a mandate (and to undercutting the sense, among doubters, that many many others don’t feel the same way).

A more important one, though, is the hashtag DrainTheSwamp. Because it is such a popular hashtag, using it guarantees that a significant number of Trump supporters will see the hashtag, even weeks after the campaign. Eliminating the “rigged” system of Washington is something they care significantly about. And it’s something that Trump’s voters showed the earliest remorse about over their choice, most notably when a woman Steven Mnuchin had foreclosed on got named Treasury Secretary.

She had voted for the president-elect on the belief that he would knock the moneyed elites from their perch in Washington. And she knew Trump’s pick for Treasury — Steven Mnuchin — all too well.

OneWest, a bank formerly owned by a group of investors headed by Mnuchin, had foreclosed on her Los Angeles-area home in the aftermath of the Great Recession, stripping her of the two units she rented as a primary source of income.

“I just wish that I had not voted,” said Colebrook, 59. “I have no faith in our government anymore at all. They all promise you the world at the end of a stick and take it away once they get in.”

I’ve seen similar responses after a number of Trump’s other appointments.

It looks like I’m not the only one who thinks this way. Trump now wants the hashtag discontinued. In fact, he never liked it — he just used it (and released a policy on it) to rile up the crowd.

Donald Trump fired up campaign crowds with a promise to “drain the swamp” of Washington corruption. But former House Speaker Newt Gingrich says the president-elect has soured on that populist rallying cry now that he has won the White House.

“I’m told he now just disclaims that. He now says it was cute, but he doesn’t want to use it anymore,” Gingrich, one of Trump’s most high-profile boosters, told NPR in an interview broadcast on Wednesday.

“I’d written what I thought was a very cute tweet about ‘the alligators are complaining’… and somebody [from Trump’s team] wrote back and said they were tired of hearing this stuff,” said the former lawmaker, whose conduct in the late 1990s earned him a historic bipartisan reprimand.

Trump himself had alluded to mixed feelings about the slogan during a Dec. 8 rally in Des Moines, Iowa, part of his triumphant postelection “Thank You” tour.

This, it seems, is a key insight. About the only incitement Trump is now trying to tamp down among his mob is the DrainTheSwamp hashtag. Of course! That’s because he’s done nothing so much as gild the swamp, much less drain it.

On no other issue is it so clear that Trump has already left his voters in the lurch. Especially in advance of big fights over billionaire nominees, making that more clear seems one of the easiest ways to undercut Trump’s power.

Trump just tweeted that he has not ditched the DrainTheSwamp hashtag, but does so without actually using the hashtag. 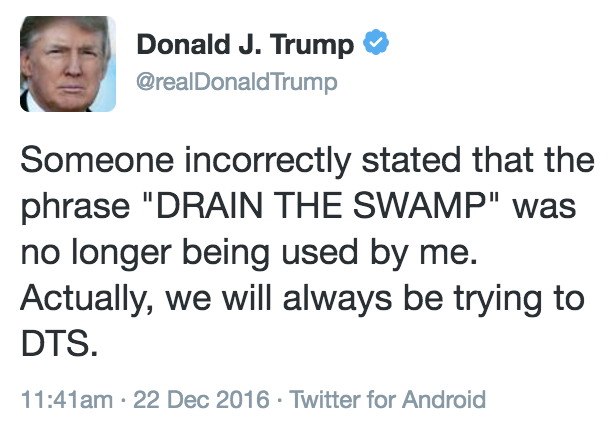