This implant represents further advancements in FANCY BEAR’s development of mobile malware for targeted intrusions and extends Russian cyber capabilities to the front lines of the battlefield.

But the release of the report — released just a few weeks after President Obama called for a review of the intelligence relating to the DNC hack — was pitched to the press as the piece of evidence that CrowdStrike’s confidence that Russia’s GRU had hacked the DNC was now solid.

While CrowdStrike, which was hired by the DNC to investigate the intrusions and whose findings are described in a new report, had always suspected that one of the two hacker groups that struck the DNC was the GRU, Russia’s military intelligence agency, it had only medium confidence.

Now, said CrowdStrike co-founder Dmitri Alperovitch, “we have high confidence” it was a unit of the GRU. CrowdStrike had dubbed that unit “Fancy Bear.”

The logic for that claim went this way:

CrowdStrike’s founder, Dmitri Alperovitch, told PBS that this amounted to DNA tying Russia to both the DNC hack and the Ukrainian artillery app.

Essentially the DNA of this malicious code that matches to the DNA that we saw at the DNC.

Yesterday, the chief infosec skeptic of the claims that Russian hacked the DNC, Jeffrey Carr, did a post criticizing the CrowdStrike report. He makes several points:

The second point is interesting. I’d add that the timeline CrowdStrike develops to explain how Russian malware would end up in a Ukrainian artillery app by December 2014, in time to play a part in devastating losses, has some problems, notably that it assumes GRU was developing a tailored app to target Ukrainian soldiers more than six months before Viktor Yanukovich’s ouster, at a time when a Russian-Ukrainian war was unforeseen. Why would Russia start developing an app to kill Ukrainian soldiers at a time when they were still led by someone who was a Russian client? That development timetable appears to be dictated by the necessity of arguing that huge artillery losses that took place in July and August 2014 were due in part to this malware. 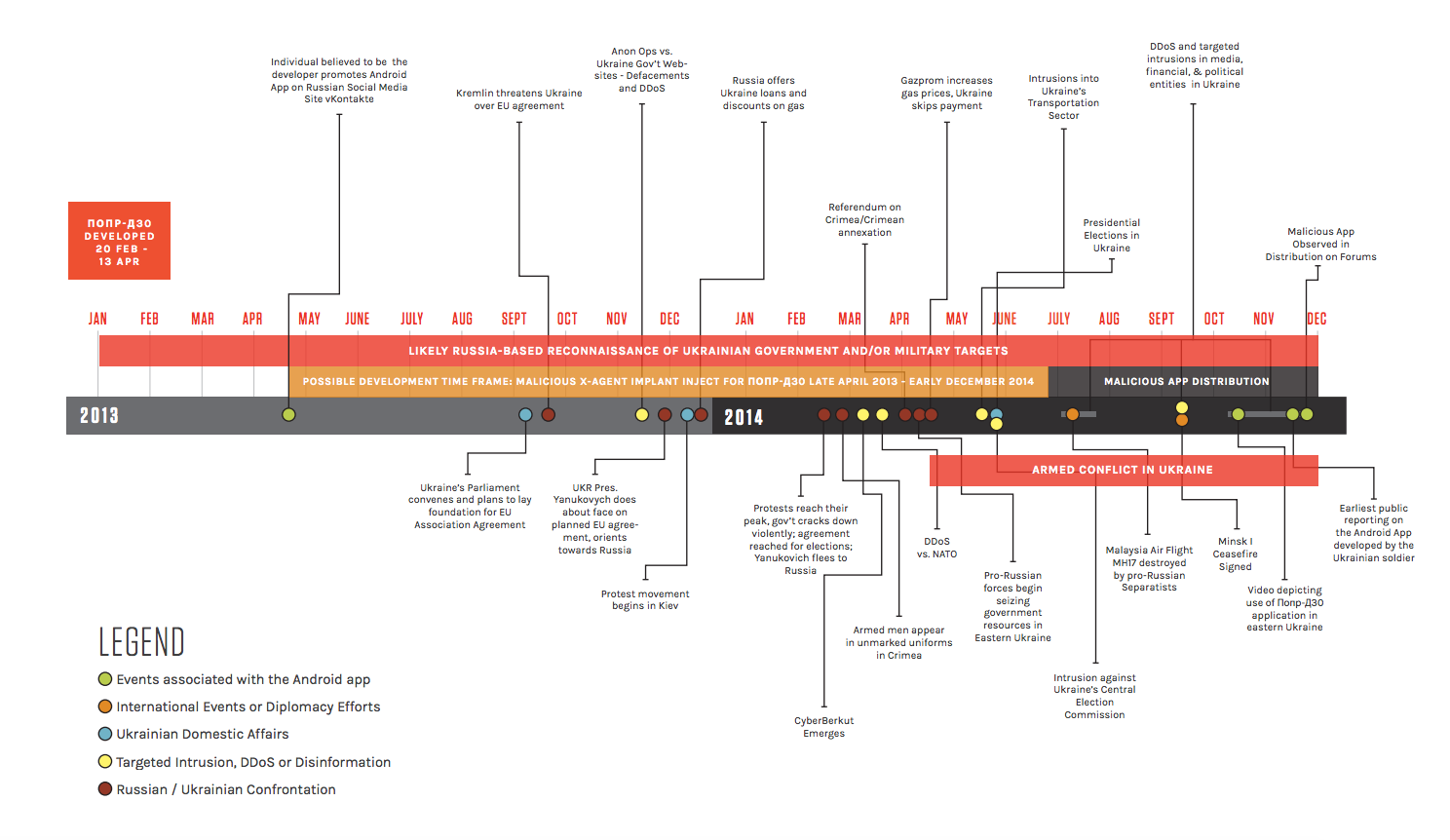 None of that is fatal to CrowdStrike’s argument that the malware infecting the Ukrainian artillery app was put there by Russia. I actually think that quite likely, though think CrowdStrike’s various explanations for it are unpersuasive.

But it does highlight how speculative the December 22 report was, creating explanations that had to be true because the conclusion — that the same malware used against the DNC had been used to kill Ukrainian soldiers — was presumed. Frankly, the report doesn’t hide that. Here’s just some of the uncertain language it uses:

The promotion of the program was likely limited to social media,

At the time of this writing, it is unclear to what degree and for how long this specific application was utilized by the entirety of the Ukrainian Artillery Forces.

Because the Android malware could facilitate gross position information, its successful deployment could have facilitated anticipatory awareness of Ukrainian artillery force troop movement,

Although traditional overhead intelligence surveillance and reconnaissance (ISR) assets were likely still needed to finalize tactical movements, the ability of this application to retrieve communications and gross locational data from infected devices, could provide insight for further planning, coordination, and tasking of ISR, artillery assets, and fighting forces. [my emphasis]

While Carr’s piece is not fatal to the argument that the X-Agent in the Ukrainian artillery app came from GRU, it does highlight how one person, in less than two weeks, could have found answers to some of things that CrowdStrike still hadn’t even tried to answer (say, by interviewing the application developer) at least six months after they started looking into this malware.

More importantly, the first point Carr makes — that others have access to X-Agent — is very important. He notes that the anti-Russian hacker Sean Townsend not only knows that it could be used by others, but that it has been.

In fact, Sean Townsend believes that the Russian security services DO use it but he also knows that they aren’t the only ones.

That doesn’t mean that GRU wasn’t the entity using X-Agent in the DNC server last year. It just means it is not, as CrowdStrike has always claimed, definitive proof that it had to be. If multiple people have access to X-Agent, the Ukrainian app, with its clear Russian military function, may be Russia while the DNC hack may be someone else.

I’ll come back to that point later, but for the moment I want to look at how CrowdStrike came to release a speculative report tying the malware in the DNC servers to dead Ukrainians on December 22, less than two weeks after Obama called for a review of the intelligence on the hack.

I asked Alperovitch some questions about the genesis of the report on Twitter.

Alperovitch revealed that no one had paid for this report: CrowdStrike was apparently doing this work for free (!!). They found the X-Agent malware in the artillery app because they had set out to look for X-Agent implants. But when I asked about timing and/or where they found it, he got less responsive. Indeed, the timing of these discoveries is something the report itself is sort of funny about.

In late June and August 2016, CrowdStrike Intelligence provided initial reporting and technical analysis of a variant of the FANCY BEAR implant X-Agent that targeted the Android mobile platform2.

Barring more clarification on whether they started looking for X-Agents before or after they very publicly accused GRU of hacking the DNC in June, what appears to have happened is this: CrowdStrike found the X-Agent in the DNC servers, accused GRU of doing the hack, and then set out — on their own dime — to find more instances of X-Agent deployment. They did not, however, do basic research (like calling the developer of the Android app, Jaroslav Sherstuk) to confirm their speculative conclusions about it, not over six months time.

Having not done that research, however, they released a report claiming they now had high confidence in their earlier attribution at precisely the time when it would affect the debate about whether GRU really did this hack or not.

Again, none of this means CrowdStrike was wrong about GRU hacking the DNC last spring. Just that this report — the timing of which is as interesting as the speculative claims — should not be regarded as providing the high confidence it claims.