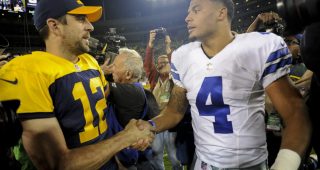 Thank you to Marcy for handling Trash Talk last weekend. That was one hell of a NCAA Championship game between Clemson and Alabama. I was at the 1997 Rose Bowl, which I thought previously was the greatest college football championship game I had ever seen, whether live or on television, and I think the last second Clemson win eclipses that pretty easily. Wow.

But now we are into week two of the NFL playoffs, and there are four games on tap. First up is Seattle at Atlanta. On the surface, this seems like a great game and you would have to think the Squawk’s savvy and playoff experience winning games is every bit the match for Atlanta, and their history of losing them. I don’t think so this year. Something is deferent about these dirty birds. I’ll take Matt Ryan and his crew today.

The night game for Saturday is the Texans at the Pats. I am not sure this is the total mismatch a lot of the national sports media are making it out to be, because the Houston defense has really grown and coalesced since early in the season. Yes, Bill Bel and the boys waxed them early in the year, even with Jacoby Brissett at QB. Houston is better now. But that ain’t enough, irrespective of the final score, just cannot see the Pats not moving on.

First up Sunday is, now thanks to heavy weather in KC, the game that was supposed to be the late Sunday featured NBC game, the Packers at Cowboys. I honestly don’t know what to think about this one. Both the Cheese and Boys have serviceable, and at times good, defenses. But neither are world beating; slight edge to the Cowboys because the Pack secondary is being manned by a few Game may well come down to the QB’s, as NFL games usually do. As good as Dak Prescott has been, that edge goes to Mr. Rodgers, who has been on a roll of all time historic proportion lately. But, if Prescott avoids turnovers and Elliott gets going on the ground, that can keep Rodgers off the field. In Lambeau, I’d take the Pack easy, In Big D, I dunno. No clue what turns out, a serious pick em in my book.

The new finale is Scribe’s Steelers in KC to face the Chefs. The weather has been so foul that the NFL moved the game time. What kind of bad weather can this be? Thanks to Peterr, we have the official forecast:

PERIODS OF SIGNIFICANT ICING ARE LIKELY ACROSS THE AREA THIS WEEKEND…STARTING FRIDAY MORNING ACROSS AREAS MAINLY SOUTH OF HIGHWAY 50 AND SPREADING NORTHWARD THROUGH THE AFTERNOON AND EVENING. PERIODS OF FREEZING RAIN WILL CONTINUE THROUGH SUNDAY EVENING ACROSS NORTHERN MISSOURI. THE MOST SIGNIFICANT ICING IS EXPECTED SATURDAY NIGHT INTO SUNDAY MORNING.

* TIMING…LIGHT PRECIPITATION WILL BEGIN FRIDAY AFTERNOON… WITH PERIODS OF FREEZING RAIN THROUGH SUNDAY AFTERNOON OR EVENING.

* MAIN IMPACT…MAJOR IMPACTS TO TRAVEL ARE LIKELY AS ICE ACCUMULATES ON AREA ROADWAYS. BRIDGES AND OVERPASSES WILL BE MOST SUSCEPTIBLE TO ICE ACCRETION. ICE ACCUMULATION ON TREES AND POWERLINES MAY RESULT IN SCATTERED POWER OUTAGES.

Gulp, that doesn’t sound good! But presumably the game goes on anyway, even if at a new time. Like Houston/NE and GB/Dallas, this is another rematch of an in season game. Early in the year, the Chefs were blown out by the Stillers, at Heinz Field. (Thanks for the editing Peterr!) Lot of people think KC can, and will win at home against the AFC North Champs. Not me. Big Ben, Bell and Brown are healthy and clicking in synch better than they ever have. That is saying something. KC is a great team, and Andy Reid is a seriously underrated great coach. But that is not enough with the way Pittsburgh is rolling right now. And Harrison, Bud Dupree and the Steel Curtain, while maybe not what that name once implied, are still pretty damn good, and playing well together. Stillers move on.

So, that is it for now. Have a GREAT Martin Luther King weekend and holiday folks. And, may I point out that John Lewis is an American hero for all ages, and Donald Trump is a worthless piece of shit.Music this weekend by Stanley Clarke, Al Di Meola and Chick Corea, i.e. Return To Forever.