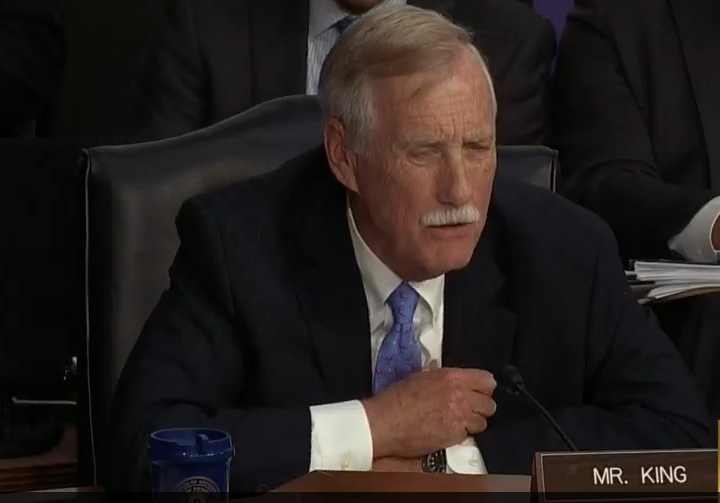 As part of his testimony today, Jim Comey revealed he gave some or all of the nine memos he wrote documenting his interactions with President Trump to a friend, since confirmed to be Columbia Professor Dan Richman, who in turn shared one with the press.

COLLINS: Finally, did you show copies of your memos to anyone outside of the department of justice?

COLLINS: And to whom did you show copies?

COMEY: I asked — the president tweeted on Friday after I got fired that I better hope there’s not tapes. I woke up in the middle of the night on Monday night because it didn’t dawn on me originally, that there might be corroboration for our conversation. There might a tape. My judgement was, I need to get that out into the public square. I asked a friend of mine to share the content of the memo with a reporter. Didn’t do it myself for a variety of reasons. I asked him to because I thought that might prompt the appointment of a special counsel. I asked a close friend to do it.

COLLINS: Was that Mr. Wittes?

COLLINS: Who was it?

COMEY: A close friend who is a professor at Columbia law school.

The fact that Comey released the memo through Richman formed part of Trump lawyer Marc Kasowitz’s pushback after the hearing.

Of course, the Office of the President is entitled to expect loyalty from those who are serving in an administration, and, from before this President took office to this day, it is overwhelmingly clear that there have been and continue to be those in government who are actively attempting to undermine this administration with selective and illegal leaks of classified information and privileged communications. Mr. Comey has now admitted that he is one of the leakers.

Today, Mr. Comey admitted that he unilaterally and surreptitiously made unauthorized disclosures to the press of privileged communications with the President. The leaks of this privileged information began no later than March 2017 when friends of Mr. Comey have stated he disclosed to them the conversations he had with the President during their January 27, 2017 dinner and February 14, 2017 White House meeting. Today, Mr. Comey admitted that he leaked to his friends his purported memos of these privileged conversations, one of which he testified was classified. He also testified that immediately after he was terminated he authorized his friends to leak the contents of these memos to the press in order to “prompt the appointment of a special counsel.” Although Mr. Comey testified he only leaked the memos in response to a tweet, the public record reveals that the New York Times was quoting from these memos the day before the referenced tweet, which belies Mr. Comey’s excuse for this unauthorized disclosure of privileged information and appears to [sic] entirely retaliatory.

Kasowitz gets a lot wrong here. Comey said one memo was classified, but that’s the memo that memorialized the January 6 meeting, not the ones described here. And the NYT has already corrected the claim that the shared memos preceded the tweet. 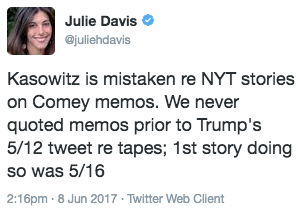 And, as a number of people (including Steve Vladeck) have noted, even if this information were covered by executive privilege, even if that privilege weren’t waived with Trump’s tweet, it’s not a crime to leak privileged information.

Nevertheless, Kasowitz’ focus on purportedly privileged documents is all the more interesting given the pathetic conduct of Director of National Intelligence Dan Coats and NSA Director Mike Rogers at yesterday’s 702 hearing. After a great deal of obfuscation from both men about why they couldn’t answer questions about Trump’s request they intervene in the FBI’s Mike Flynn investigation, Angus King finally got Rogers to admit that he and Coats never got a conclusive answer about whether the White House was invoking privilege.

King: I think you testified, Admiral Rogers, that you did discuss today’s testimony with someone in the White House?

Rogers: I said I asked did the White House intend to invoke executive privilege with respect to interactions between myself and the President of the United States.

King: And what was the answer to that question?

Rogers: To be honest I didn’t get a definitive answer. Both myself and the DNI are still talking–

King: So then I’ll ask both of you the same question. Why are you not answering these questions? Is there an invocation by the President of the United States of executive privilege? Is there or not?

Rogers: Not that I’m aware of.

King: Then why are you not answering the question?

Rogers: Because I feel it is inappropriate, Senator.

Rogers: I stand by the comments I’ve made. I’m not interested in repeating myself, Sir. And I don’t mean that in a contentious way.

King: Well I do mean it in a contentious way. I don’t understand why you’re not answering our questions. When you were confirmed before the Armed Services Committee you took an oath, do you solemnly swear to give the committee the truth, the full truth and nothing but the truth. You answered yes to that.

King: What is classified about a conversation about whether or not you should intervene in the FBI investigation?

Rogers: Sir I stand by my previous comments.

King: Mr. Coats? Same series of questions. What’s the basis for your refusal to answer these questions today?

Coats: The basis is what I’ve previously explained, I do not believe it is appropriate for me to–

King: What’s the basis? I’m not satisfied with I do not believe it is appropriate or I do not feel I should answer. I want to understand a legal basis. You swore that oath to tell us the truth, the whole truth, and nothing but the truth, and today you are refusing to do so. What is the legal basis for your refusal to testify to this committee?

Coats: I’m not sure I have a legal basis.

In other words, these men admit they had no legal basis (they’re not classified, no matter what Rogers claimed) to dodge the Committee’s question. But nevertheless they’re invoking things like their feelings to avoid testifying.

Clearly, the White House is playing a game here, invoking loyalty rather than law to compel silence from its top officials.

Kasowitz’ claims are, on their face, bogus. But taken in conjunction with the dodges from Coats and Rogers, they’re all the more problematic.