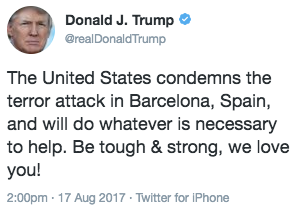 At around 6PM Barcelona time (12 PM ET), a van drove into pedestrians on Barcelona’s Ramblas walkway. Authorities recently announced that 13 people were killed and at least 50 others wounded. (see update).

Here’s what Trump has tweeted about the vehicular manslaughter attack in Charlottesville on Saturday. 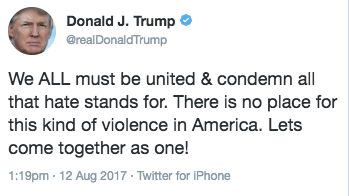 At 1:42 Nazi James Alex Fields Jr drove his car into Heather Heyer and other counterprotestors, killing Heyers and injuring at least 19 others.

It wasn’t until 3:33 when Trump made a statement, condemning violence “on many sides.”

[W]e’re closely following the terrible events unfolding in Charlottesville, Virginia.  We condemn in the strongest possible terms this egregious display of hatred, bigotry and violence, on many sides.  On many sides.  It’s been going on for a long time in our country.  Not Donald Trump, not Barack Obama.  This has been going on for a long, long time.

It has no place in America.  What is vital now is a swift restoration of law and order and the protection of innocent lives.  No citizen should ever fear for their safety and security in our society, and no child should ever be afraid to go outside and play, or be with their parents, and have a good time.

I just got off the phone with the Governor of Virginia, Terry McAuliffe, and we agreed that the hate and the division must stop, and must stop right now.  We have to come together as Americans with love for our nation and true affection — really — and I say this so strongly — true affection for each other.

Our country is doing very well in so many ways.  We have record — just absolute record employment.  We have unemployment, the lowest it’s been in almost 17 years.  We have companies pouring into our country.  Foxconn and car companies, and so many others, they’re coming back to our country.  We’re renegotiating trade deals to make them great for our country and great for the American worker.  We have so many incredible things happening in our country.  So when I watch Charlottesville, to me it’s very, very sad.

I want to salute the great work of the state and local police in Virginia — incredible people — law enforcement, incredible people — and also the National Guard.  They’ve really been working smart and working hard.  They’ve been doing a terrific job.  The federal authorities are also providing tremendous support to the governor.  He thanked me for that.  And we are here to provide whatever other assistance is needed.  We are ready, willing, and able.

He then posted several tweets of video from his stilted speech, invoking the racist Americans First pledge. 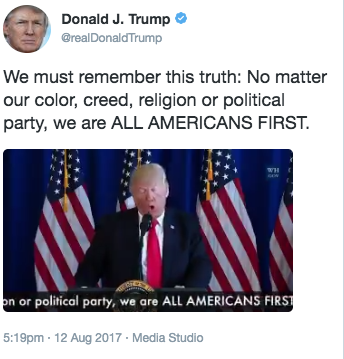 He eventually got around to offering condolences to Heather Heyer’s family that night, though not by name, and offered “best regards” to “all of those injured.” 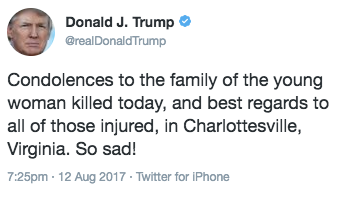 Trump finally made some more appropriate prepared comments on Monday, calling out the KKK, neo-Nazis, and white supremacists specifically (though also mentioning “other hate groups”).

As I said on Saturday, we condemn in the strongest possible terms this egregious display of hatred, bigotry, and violence.  It has no place in America.

And as I have said many times before:  No matter the color of our skin, we all live under the same laws, we all salute the same great flag, and we are all made by the same almighty God.  We must love each other, show affection for each other, and unite together in condemnation of hatred, bigotry, and violence.  We must rediscover the bonds of love and loyalty that bring us together as Americans.

Racism is evil.  And those who cause violence in its name are criminals and thugs, including the KKK, neo-Nazis, white supremacists, and other hate groups that are repugnant to everything we hold dear as Americans.

Two days ago, a young American woman, Heather Heyer, was tragically killed.  Her death fills us with grief, and we send her family our thoughts, our prayers, and our love.

We also mourn the two Virginia state troopers who died in service to their community, their commonwealth, and their country.  Troopers Jay Cullen and Burke Bates exemplify the very best of America, and our hearts go out to their families, their friends, and every member of American law enforcement.

These three fallen Americans embody the goodness and decency of our nation.  In times such as these, America has always shown its true character:  responding to hate with love, division with unity, and violence with an unwavering resolve for justice.

As a candidate, I promised to restore law and order to our country, and our federal law enforcement agencies are following through on that pledge.  We will spare no resource in fighting so that every American child can grow up free from violence and fear.  We will defend and protect the sacred rights of all Americans, and we will work together so that every citizen in this blessed land is free to follow their dreams in their hearts, and to express the love and joy in their souls. 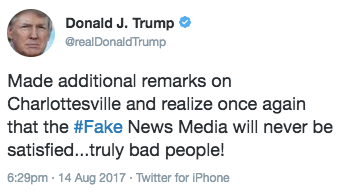 Wednesday, he finally got around to naming Heyer on Twitter. 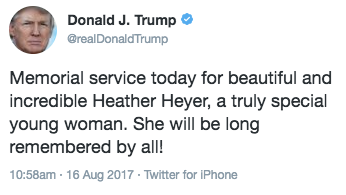 He of course then made off the cuff comments at an announcement on infrastructure. After explaining the delay in condemning white supremacists because he wanted to wait until he had the facts, he refused to call the attack terrorism.

It was very important — excuse me, excuse me — it was very important to me to get the facts out and correctly.  Because if I would have made a fast statement — and the first statement was made without knowing much, other than what we were seeing.  The second statement was made after, with knowledge, with great knowledge.  There are still things — excuse me — there are still things that people don’t know.

I want to make a statement with knowledge.  I wanted to know the facts.

Q    Two questions.  Was this terrorism?  And can you tell us how you’re feeling about your chief strategist, Stephen Bannon?

THE PRESIDENT:  Well, I think the driver of the car is a disgrace to himself, his family, and this country.  And that is — you can call it terrorism.  You can call it murder.  You can call it whatever you want.  I would just call it as “the fastest one to come up with a good verdict.”  That’s what I’d call it.  Because there is a question:  Is it murder?  Is it terrorism?  And then you get into legal semantics.  The driver of the car is a murderer.  And what he did was a horrible, horrible, inexcusable thing.

He went on to complain that the press had treated some “fine people” protesting alongside Nazis unfairly.

THE PRESIDENT:  So you know what, it’s fine.  You’re changing history.  You’re changing culture.  And you had people — and I’m not talking about the neo-Nazis and the white nationalists — because they should be condemned totally.  But you had many people in that group other than neo-Nazis and white nationalists.  Okay?  And the press has treated them absolutely unfairly.

Then, this morning, in response to Lindsey Graham’s (among others) criticism of those comments, Trump lashed out. 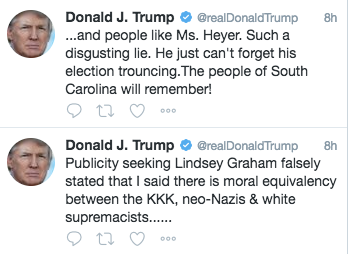 Update: According to later reports Oukabir voluntarily went to the authorities and reported his documents had been stolen.

Dana Rohrabacher Brokering Deal for Man Publishing a CIA Exploit Every Week Rohrabacher Can’t Remember Talking Assange Pardon with Trump But Is Sure...