One thing that the 2011 702 documents Charlie Savage liberated make clear is that the government is (and was) obtaining more domestic communications — but purging them — than it wants to let on (and the numbers have surely gotten worse since 2011).

In a hearing on September 7, 2011, the first question that John Bates asked (starting at PDF 35) about the sampling the NSA had done is how many communications had been purged before the agency started counting its sample, a sample that included both PRISM and upstream collection. As Bates noted, it would be one thing if the NSA were purging half its collection and then counting than if it only had to purge a small amount. 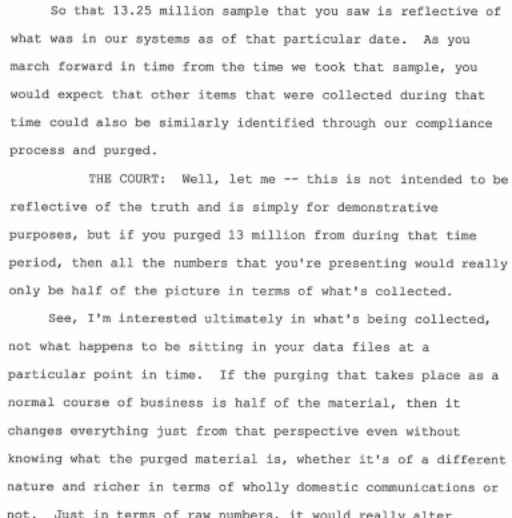 During this exchange, the government was careful to limit their discussion of purged communications to upstream MCT related collection.

When the government responded (starting at PDF 117), it provided numbers for just what had gotten purged from upstream collection.

I’m not entirely sure their claim that none of this purged information was “upstream” collection — as opposed to MCT collection — is correct (as a post on the violations will explore). But they make it clear: the 18,446 purged communications were just Internet upstream. For every upstream  record purged because the target had roamed into the US, there might be correlated telephony collection that would get purged — some of the most commonly discussed purged communications. It might also include PRISM production that would have to get purged (if, for example, the target continued to use GMail while in the US). In addition, there might be targets discovered to be (perhaps by reading that PRISM production) Americans. So the 18,446 is just a portion of what got purged — but the government pointedly avoided telling Bates how much of the other kind there was.

Of the upstream Internet collection in 2011, .1% was getting purged.

The purge numbers for telephony and PRISM would not be the same as for upstream. The telephony numbers might be far far higher, given public reporting from the period. The NSA was working off some overcollection that was limited to upstream during this period, which would lead to more upstream communications being purged. But the rules on domestic collection of PRISM communications are different than they are for upstream.

In any case, the government’s careful dodge of providing Bates the full purge number suggests the telephony and PRISM purge numbers might be substantial, too. But we don’t get that number.