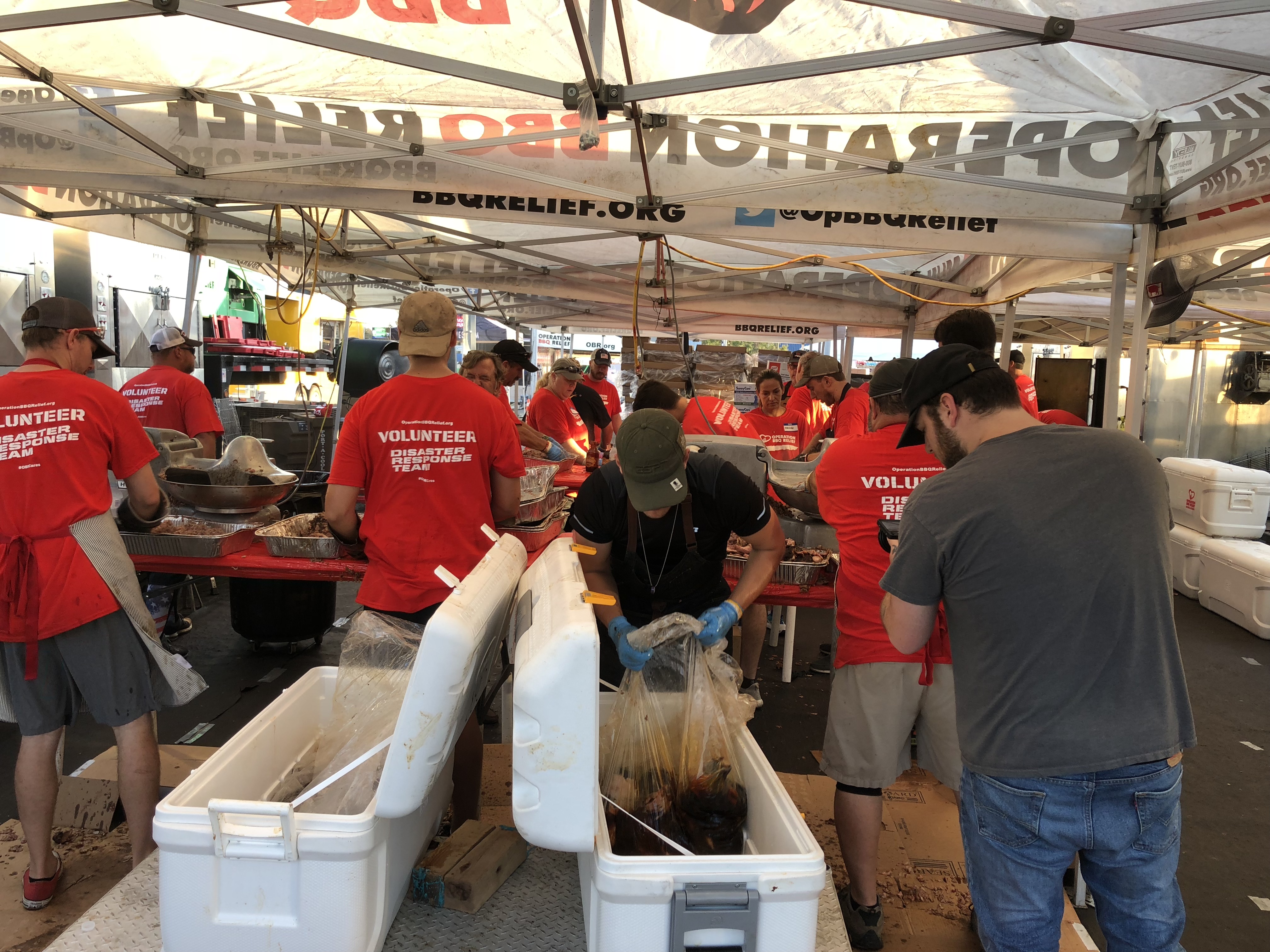 Those of you who have seen my recent Twitter posts are aware that I went to Wilmington, NC to volunteer with Operation BBQ Relief. We provided meals for people affected by the massive flooding in the Wilmington region resulting from Hurricane Florence. I helped from Sunday, September 23 through Friday, September 28. It was an exhilarating  experience. But I was far from alone. The massive civilian response to this natural disaster clearly rivaled, and in some cases appeared to exceed, the response by FEMA. On September 30, OBR reported having provided 314,575 meals during its time in Wilmington. Similarly, World Central Kitchen, affiliated with Chef José Andrés, reported on October 1 that they had prepared 300,000 meals for the Wilmington area. Many rescues as the floodwaters rose were carried out by the Cajun Navy, which sent over 300 volunteers and responded to over 1500 calls for help during the flooding. They kept a smaller group of volunteers in the region after the initial rescues so that they could deliver food and supplies to neighborhoods that remained cut off by the persistent floodwaters.

That such a massive civilian response is needed is vexing. I lament that government has been so shrunken and so populated with rogues ranging from the merely inept (Heck of a job, Brownie!) to straight up grifters (Scott Pruitt and even Donald Trump himself) that we have to fulfill a primary government function (provide for the common defense) through ad hoc volunteer networks.

At the same time, that such networks of volunteers DO come together is a wonderful affirmation of the compassion and empathy that unite all that is good in humanity. I will admit to a bit of trepidation in choosing to work with OBR. After all, it’s barbecue in the South. I wondered if I would be surrounded by people in MAGA hats. But I chose OBR over WCK because I know barbecue and I’m not a professional chef, so I felt I had more to offer there. I also chose to go there because I realized that it would be likely I would be working alongside many conservatives (I saw no MAGA hats there, by the way), but wondered if they would experience a bit of cognitive dissonance if they realized the empathy they were showing for the flood victims was mostly lacking in the policies they choose to endorse.

While I of course did not find out if any of the volunteers had an epiphany and chose to support more generally empathetic policies, I did feel that a genuine breaking of normal barriers occurred during the busy times producing so many meals.  Working the production lines, simple backyard barbecue enthusiasts like me worked shoulder to shoulder with successful barbecue competition team leaders and owners of barbecue restaurants. They shared information and tips freely, so I learned a huge amount. It turns out that a couple of the leaders for our work also lecture in the BBQ Boot Camps offered by the North Carolina Barbecue Society, and I’ve added attending one of those to my bucket list.

The clear high point of my time there was on Monday, September 24 when we paused our work to commemorate the 2,000,000th meal prepared by OBR since its inception in 2011 following the massive tornado in Joplin, MO. The person chosen to receive that special meal is described in the video OBR posted here (the heart of the story begins around the 4 minute mark if you want to skip ahead). There were very few dry eyes under the tent by the end of the story even though the smokers surrounding us were finished cooking for the day. There was a magical feeling of compassion in the air, along with a sense of awe for what people working together could accomplish. With any luck, that feeling will creep into other aspects of life for some of those who were there.

I did come away with a feeling that perhaps for a few folks, doing volunteer work of this sort may well be a case of “walking the walk” that goes along with talk of very limited government. I still don’t see how that could mesh with the utter lack of empathy displayed by the gentleman behind the check-in desk one morning who wore a shirt proclaiming “Stand for the flag, kneel for the cross” or the lack of empathy for victims of sexual assault that it takes to continue to support Brett Kavanaugh. But at least on the front of caring for one another when disaster strikes, our country is still infused with a compassion that overcomes all barriers. If only we can find a way for it to spread to other fronts.