Why Have Roger Stone and Trump Hidden Their Ongoing Joint Defense “Collusion”?

Donald Trump is happy to admit that he’s a potential criminal co-defendant with a whole slew of (37!!) shady characters, up to and including (perhaps especially) the guy who worked for his campaign for “free” while apparently being handled by a current-or-former GRU officer. He even recently added the far right’s greatest serial fabulist Jerome Corsi to his omertà. But his lifelong political advisor, Roger Stone, is allegedly not in it.

Stone recently told WaPo he’s not in a JDA with Corsi or anyone else in this investigation, which would seem to necessarily include Trump.

Stone, who recently brought a new defense attorney onto his legal team, said he does not have a joint defense agreement with Corsi or anyone else who is involved in the investigation.

Nevertheless, Stone was on ABC yesterday (in a horrible — for him — appearance that I’ll return to) denying that he has or would ever ask Trump for a pardon, the kind of pardon comment that people who have been floated pardons keep invoking.

STEPHANOPOULOS: You say you’re always going to be loyal to President Trump. If you’re indicted or convicted, do you expect that he’ll pardon you?

STONE: First of all, generally speaking in politics, you avoid hypothetical questions. That said, there’s no circumstance under which I would testify against the president because I’d have to bear false witness against him. I’d have to make things up and I’m not going to do that. I’ve had no discussion regarding a pardon.

That comment may or many not have been one of the things (as well as detail of Cohen’s cooperation against Trump) that set Trump off this morning. 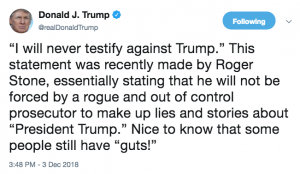 A number of smart lawyers (including George Conway and Neal Katyal) argue that this Tweet, even beyond Trump’s normal efforts, may constitute witness tampering.

So to sum up: unlike Trump’s 37 other potential co-conspirators, he — Trump’s longtime political advisor and a lifelong ratfucker — Stone claims that he’s not in a JDA, but won’t testify against Trump out of the goodness of his own heart.

I find that all very interesting against the context of a recent WaPo article about how (and how frequently) Stone and Trump spoke during the campaign.

In recent months, the Trump Organization turned over to Mueller’s team phone and contact logs that show multiple calls between the then-candidate and Stone in 2016, according to people familiar with the material.

The records are not a complete log of their contacts — Stone told The Washington Post on Wednesday that Trump at times called him from other people’s phones.

Stone said he never discussed WikiLeaks with Trump and diminished the importance of any phone records, saying “unless Mueller has tape recordings of the phone calls, what would that prove?”

Stone and WikiLeaks have denied collaborating with each other, and Stone has decried the Mueller investigation as a “political witch hunt” to punish him for supporting Trump.

Trump has told his lawyers — and last week said in written answers to Mueller — that Stone did not tell him about WikiLeaks’ upcoming release and that he had no prior knowledge of it, according to people familiar with his responses.

After a period, by Stone’s admission, Stone and Trump communicated via cut-outs.

From January through March 2016, Stone said he had a cellphone number for Trump. But he said the phone number got into too many hands, and Trump’s staff changed it. After that, a pattern developed for their calls, Stone said: Trump would call Stone from a blocked number or from the phones of associates or campaign aides.

“He would initiate the calls,” Stone said. “I didn’t call him.”

Once, Stone said, he answered his iPhone because the caller ID said he was getting a call from Christopher Ruddy, a Trump friend who is the CEO of Newsmax, a conservative television network. But the voice on the line was Trump’s.

“I believe there was one time when he asked me to call Roger,” Ruddy said in an interview Wednesday, adding that he did not believe “there was any discussion related to Russians or improper activities.”

The calls from Trump came at odd hours, Stone said, because Trump “gets almost no sleep.” Trump usually wanted to get a sense of how the campaign was going, Stone said, or just to “touch base.” Stone sometimes offered suggestions, but often he could barely get a word in.

Perhaps in response to Stone’s ABC appearance, Rick Wilson tweeted that he had alerted Mueller about an on-going back channel between Stone and Trump. 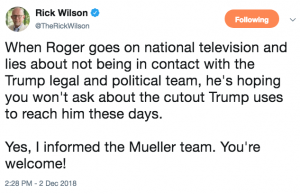 Stone recently made Bruce Rogow his lead attorney on these matters. Rogow has represented Trump Organization in various disputes over the years (including one that will elicit scrutiny in NY State’s lawsuit against the Trump Foundation.

In 1992, Rogow represented former KKK leader David Duke in a case brought by the ACLU to have Duke reinstated on the Florida Republican presidential primary ballot.

Rogow began to pick up more cases for the Trump Organization.

Rogow represented Trump in a federal complaint that arose from the case, arguing that the town ordinances “unconstitutionally restrict its ability to fly a large American flag at Mar-a-Lago.”

Trump eventually settled the case, agreeing to move the flag inwards on his property and pay $100,000 to an Iraq War veterans’ charity in exchange for the town waiving its fines.

The donation was made, but not by Trump himself or Mar-a-Lago — rather, the Trump Foundation gave the $100,000. That donation has now become one part of a New York State Attorney general’s lawsuit against the charity.

That would be truly remarkable. It would say an association with Stone — and whatever it is Mueller seems to know he did during the election — is even more toxic than Trump’s ties with a guy apparently being handled by a GRU officer.

tweets from our circle
bmaz@bmazRT @ChrisInParis: LOL these people actually believed carnival barker Musk. You stupid, stupid people. twitter.com/business/statu…14 minutes ago18 May 2021
bmaz@bmazRT @PoliticsWolf: Either Breyer is delusional after having ample opportunity to see how disastrous it was for RBG to not step down under Ob…15 minutes ago18 May 2021
bmaz@bmazRT @JenAFifield: ICYMI: Maricopa County's supervisors are officially angry. Calling the election audit a "grift" and a "circus" and telling…16 minutes ago18 May 2021
bmaz@bmazRT @JenAFifield: "People's tax dollars are real, your 'auditors' are not." pic.twitter.com/j7YfIRgl8O20 minutes ago18 May 2021
Jim White@JimWhiteGNVWow. That pitch Pillar took to the nose was brutal. Hope he's not injured too badly.4 hours ago18 May 2021
Ed Walker 🍞🌹💉💉@MasaccioEWRT @jamieson: Kroger's CEO got a $22 million pay package last year, even as Kroger ended its $2/hr "hero" pay for frontline workers after j…6 hours ago18 May 2021
emptywheel@emptywheelA post from 2016 on Matt Olsen, who was just nominated to lead NSD at DOJ. Matt Olsen Admits He Didn't Bargain on… twitter.com/i/web/status/1…7 hours ago17 May 2021
Ed Walker 🍞🌹💉💉@MasaccioEWRT @SZunes: Apparently what is causing the US to block an otherwise-unanimous UNSC statement is the other 14 members insist on either menti…8 hours ago17 May 2021
emptywheel@emptywheelReup: Rudy's Lawyers Destroy His Reputation in an Attempt to Save It emptywheel.net/2021/05/17/rud… I've included links… twitter.com/i/web/status/1…10 hours ago17 May 2021
Jim White@JimWhiteGNVUhm, that's pitiful for a country of nearly 85 million people. twitter.com/AliVaez/status…13 hours ago17 May 2021
Jim White@JimWhiteGNVI'm guessing Gaetz' only hope at this point is if he has enough to get DeSantis, Scott or Trump indicted. Otherwise… twitter.com/i/web/status/1…14 hours ago17 May 2021
RayneToday@raynetodaySounds fishy to me, like a cover story. twitter.com/kylegriffin1/s…5 months ago19 December 2020
RayneToday@raynetodayGee whillikers, I wonder why and when a county in Arizona was breached?? /snark twitter.com/Reuters/status…5 months ago18 December 2020
RayneToday@raynetodayRT @JustinPHicks: “I still cannot get a straight answer out of the Trump administration about why Michigan, like many other states, is rece…5 months ago18 December 2020
RayneToday@raynetodayRT @mcsweeneys: We've updated our catalog of Trump's cruelties, collusions, corruptions, and crimes. He's up to 1,028 now. https://t.co/zis…5 months ago15 December 2020
RayneToday@raynetodayRT @LoopEmma: Saudi Arabia hires new crop of lobbyists ahead of Biden administration cnbc.com/2020/12/15/sau…5 months ago15 December 2020

If SSCI Was Referring All This Perjury to Mueller about GRU Funding Trump, Why... The Illogical Core of “Chain Migration” Sponsor and Grifter Jerome...