Our Lady of Paris 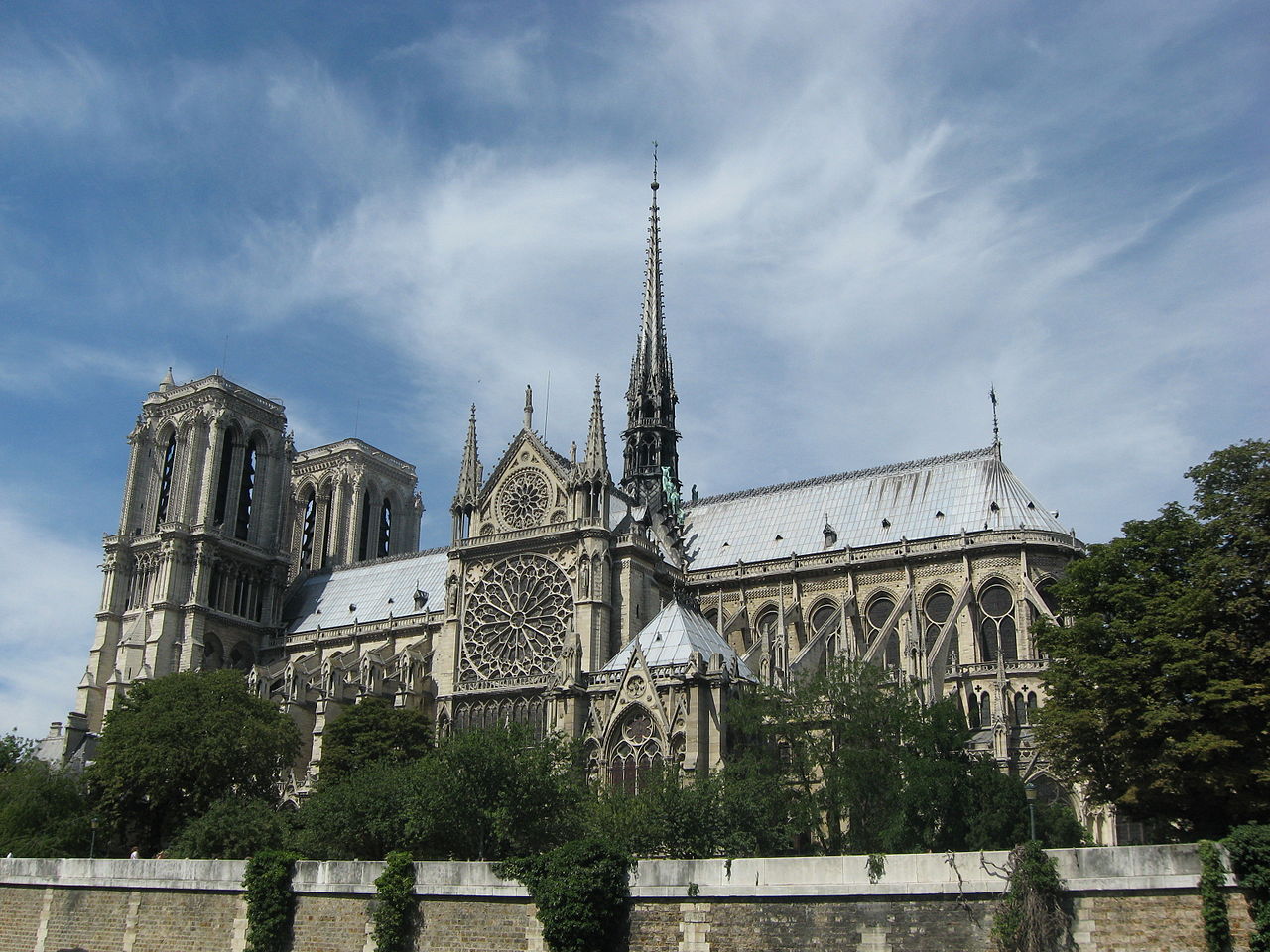 Once upon a time way back in the day when I was still wet behind the ears, I was a draftsman. I worked with architects and structural engineers drawing all kinds of buildings and structures, from public schools to bridges, churches to foundries.

There was nothing like the unlimited promise of virgin vellum beneath my graphite, waiting to become something realized in two dimensions before it became real in three dimensions. I still miss that feeling, watching the crisp expanse of white and grey lines become a building I would eventually see built across town.

You can imagine what a structure like the Notre-Dame of Paris means to someone who made a living working with designers, builders, and craftsmen responsible for buildings used by the public. What an immense challenge she must have been to the artisans of her time, all working together to make this incredible monument to human skill and dedication.

It has also meant a lot to me because some of my antecedents were French and Catholic. My family can trace them through church records to the 16th century and the religious wars which destroyed earlier churches and ravaged Notre-Dame at one time. Their lives were shaped in some way by the politics that worked through the French Catholic church and Notre-Dame.

Some of my family lived within sight of the cathedral at Rouen; others lived within sight of the cathedral at Poitiers, both of them built using similar flying buttress architecture like that of Notre-Dame de Paris. Though not all my family were Catholic at the time, it was a family member who was very tight with the church who was selected to assist and travel with the brethren of the Society of Jesus in what would become Quebec. Were it not for this relationship between this ancestor and the church, I would not be here writing this in North America today. There are millions of us across the country who share similar heritage.

A day after the fire started, what’s left after the flames’ destruction looks better than it could have though I remain skeptical about the scale of loss. I haven’t worked with restoration of structures this old, but I’ve worked on recovery for a number of projects, some of which were damaged during construction and repairs. They are nearly always more challenging than initial estimates.

At this point I want to interject and make a point about Glenn Beck’s utterly ignorant and irresponsible remark yesterday, intended to stir religious hate. He knows jack shit about construction and restoration, let alone how to care for 800-year-old antiques. Anything he says is uninformed on this topic.

It would have been incredibly easy for the cathedral to catch fire during repairs. If you’ve ever run a power saw and hit something metal, you know sparks are a realistic risk. There could have been problems with electrical equipment; we don’t know if there was any aged wiring installed in the roof.

Nor was this France’s “9/11 moment” as Beck called it. This wasn’t a terrorist embedded in a construction crew, working diligently for months to assemble a massive scaffolding platform around the flèche (spire) of the Notre-Dame, taking down the copper statues, waiting for the perfect moment to drop a match out of religious hate. What idiotic poppycock.

Meanwhile, within reach of aged tapestries, hundreds of votive candles continued to burn in the nave throughout the fire. Sure, Beck, it was a terrorist on the roof when a determined terrorist could simply have walked in through the massive Portal of the Judgement smack in the middle at the west end of the cathedral.

Construction accidents like this happen. I’ve worked on projects that had major failures, most often due to contractors unintentionally skipping a step in the project plan, and the investigation afterward can be grueling. It’s why these kinds of restoration jobs can be difficult to bid out — imagine trying to underwrite this particular job.

One data source certain to be employed is the digital scans made of Notre-Dame by art historian Andrew Tallon. Though he died in 2018, his work documenting the cathedral’s structure will live on in the restoration to come. Thank goodness for his personal obsession with Notre-Dame assured a digitized image which also indicated structural weakness from centuries of aging before the fire which must be repaired.

Some of aging, reported on last year, had already been under repair — and here we are, faced with an even larger repair.

At least this time the repairs may last longer than the ones done after Victor Hugo wrote the Hunchback of Notre Dame. France has begun a campaign to phase out fossil fuel vehicles with Paris leading the way. Air pollution has hastened the decline of buildings like the Notre-Dame as emissions are acidic and eat at structures. By this summer diesel vehicles 20 years old or older will be banned from Paris; eventually, all fossil fuel vehicles will be banned from Paris by 2030 and all of France by 2040.

Perhaps by then the reconstruction of Notre-Dame de Paris will be completed to face a cleaner future.
_______ 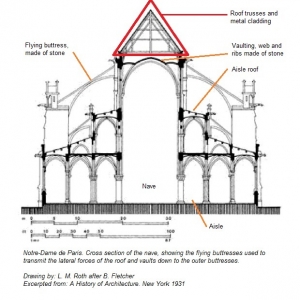 This graphic isn’t particularly good quality but it does a reasonable job of depicting the greatest portion of the building affected by fire — the roof trusses above the stone vaulted ceiling as well as the metal cladding.

Here is another older drawing of the Notre-Dame in cross section (source unknown): 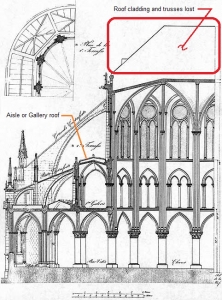 What we don’t know yet is how much of roofing over the aisle/gallery on each side of the cathedral may have been involved or damaged by water used on the roof above. Nor do we know how much of any flammable items were damaged inside the church, from pews to the organ, nor do we yet know the full scale of the damage to the church’s once-magnificent stained glass windows. It appears the famous Rose windows may have been saved.

This link shows the Notre-Dame’s metal roof — note the grey lead in contrast to the verdigris copper statuary which had thankfully been removed from around the flèche during the ongoing repairs. The lead has all melted or vaporized.

Note also in the image at this link the stonework shows decay; the basic-to-neutral Lutetian limestone has been softened by acid rain caused by air pollution. Let’s hope the reconstruction project will address these problems at the same time as they have begun to threaten the stability of the structure.

And no matter what you hear about the reconstruction project to come, it’s still too soon for an assessment as the stones are likely still warm and have not fully cooled to pre-fire temperatures. Rapid cooling of the stone may continue the fire’s damage, causing cracks into which water and pollution can settle and expand, breaking stones.

It is, however, a perfect time to talk about funding the work ahead and whether the work will duplicate the original as much as possible or incorporate contemporary technology to ensure a longer span of time between future repairs.

This is an open thread. Do bring all your discussion about Notre-Dame de Paris here, though.

Manafort’s Federal Life Sentence Might Just Get Longer The Debate We May Be Having Tomorrow: If Trump Obstructed Justice to Hide Compromise...