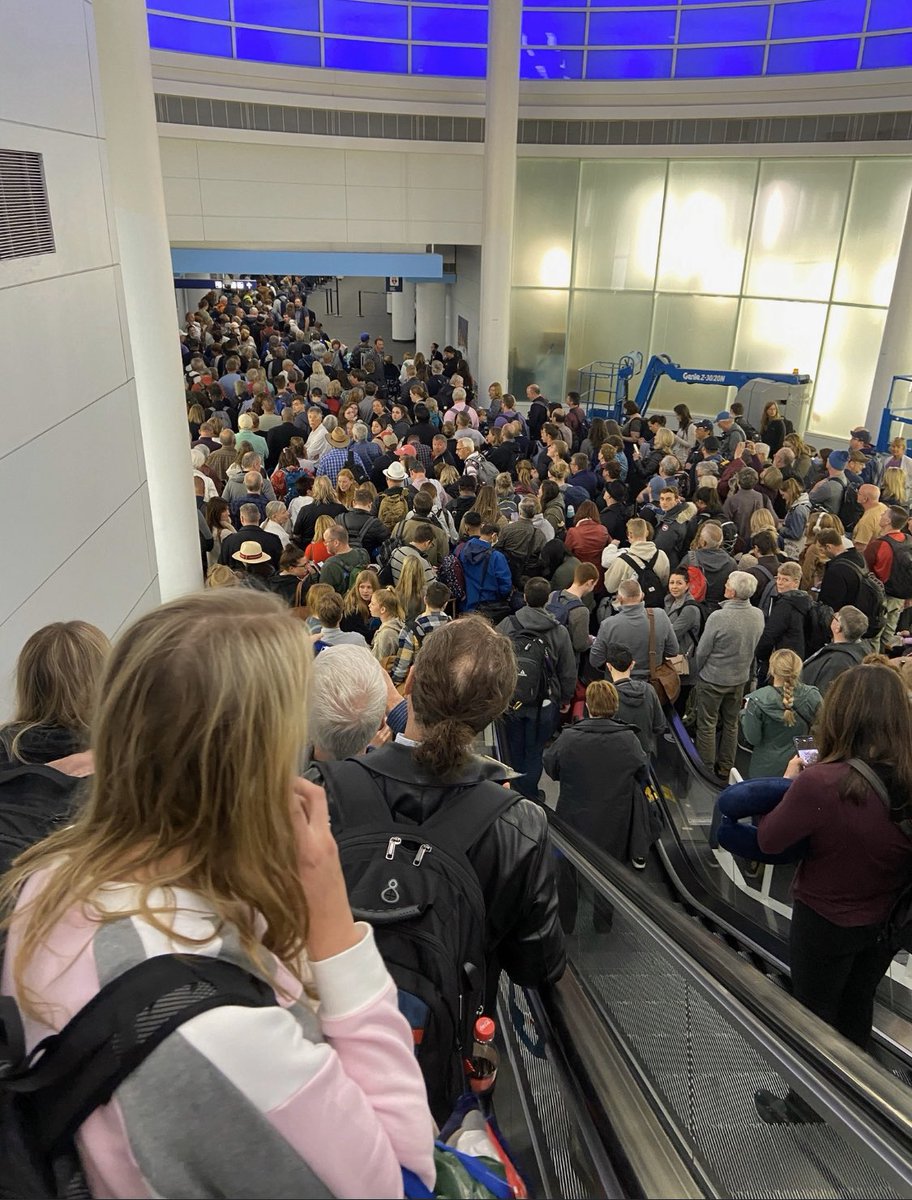 Earlier this week, Donald Trump announced Vladimir Putin’s dream of travel restrictions in response to the the COVID-19 pandemic, “banning” travel from Europe, but excepting the UK, where there are many more cases than in a number of European countries. Trump eventually was forced to add the UK to the ban. As the new policy began to roll out yesterday in the major international US airports, there was nothing less than a clusterfuck of epic proportions. The feature image for this post comes from a Brooke McDonald tweet showing a huge crowd trying to clear customs at O’Hare. Here is a tweet from a Fox station in Texas showing the crowd trying to clear customs at DFW:

This is currently the waiting line for U.S. customs at DFW Airport, as international travelers are having to deal with a long wait as they re-enter the country. https://t.co/AkmAYw2tjg pic.twitter.com/c7RKkS0gzo

What could possibly go wrong? With large crowds of people coming back from infection hot zones, milling about for what was reported to be up to seven stress-filled hours, it’s hard to imagine a scenario more conducive to efficient spread of the virus.

Here is the New York Times on what unfolded:

Under the new screening rules, when travelers arrive at 13 designated airports they are to be interviewed by a Customs officer, who will also review the person’s travel history using a Homeland Security database. The officer will ask them about their current medical condition. If they don’t show symptoms, they will be asked to quarantine in their homes for 14 days. Depending on their symptoms and previous medical history, travelers could be subject to an additional screening by a medical professional at the airport. They could also be subject to a federal quarantine.

Seems simple enough. But in Trump’s era of never having enough of the right employees in the right place, this simple screening resulted in the massive delays. Here is the Acting Head of Customs and Border Protection on the situation last night:

We are aware of the reports of increased wait times at some airports across the nation. CBP along with medical personnel are working diligently to address the longer than usual delays. Nothing is more important than the safety, health and security of our citizens. Full statement: pic.twitter.com/JyPRSS9snr

Yeah, right. Nothing is more important that the health of our citizens, so you trap thousands of people into tight spaces that are virtually guaranteed to have symptom-free people shedding large amounts of virus.

Here’s how that happens.

First, we know that virus can be spread by folks not showing symptoms. From CNN:

New studies in several countries and a large coronavirus outbreak in Massachusetts bring into question reassuring assertions by US officials about the way the novel virus spreads.

These officials have emphasized that the virus is spread mainly by people who are already showing symptoms, such as fever, cough or difficulty breathing. If that’s true, it’s good news, since people who are obviously ill can be identified and isolated, making it easier to control an outbreak.

But it appears that a Massachusetts coronavirus cluster with at least 82 cases was started by people who were not yet showing symptoms, and more than half a dozen studies have shown that people without symptoms are causing substantial amounts of infection.

Next, as the CNN article notes, the Boston cluster of cases arising from the Biogen conference resulted in many people being infected from a small number who were infected but asymptomatic at the time. From WBUR:

Among the coronavirus numbers that Massachusetts officials have shared recently, one is particularly striking: Of the state’s 95 cases detected as of late Wednesday, they say 77 stemmed from a meeting that the Cambridge biotech company Biogen held in late February.

In public health parlance, the Biogen meeting is looking like a “superspreading event.”

Yale professor Nicholas Christakis, a physician and sociologist who studies networks, says the current outbreak in Italy also stemmed from a “superspreader.”

“We know from genetic analyses in Italy that the epidemic there was started, we think, by two people, one of whom gave it to 43 other people,” he says.

But here’s the kicker:

Christakis from Yale says other factors could cause people to become superspreaders — like even a propensity to cough.

“Maybe they have a lung disease, for example,” he says. “And so they’re doing more coughing anyway. And so compared to a person who doesn’t cough, they transmit it more.”

The environment can contribute to spreading, too, he says — poor ventilation, overcrowding.

Yep. There we have it. Overcrowding can create superspreaders. And Customs and Border Protection just overcrowded thousands of people for long periods last night. In thirteen different airports.

I keep re-reading the description of the “screening” and don’t see how the outcome of screening would be any different if people cleared Customs in a normal way but were given a set of printed instructions informing them that if they were returning from Europe they should self-quarantine for at least 14 days and that if they have or develop any symptoms they should notify their health provider and/or county health department. At that point it would seem safer to have them call a call center where they can share their travel history with someone coordinating the DHS database. Making people mill around for so long really appears to have accomplished nothing other than spreading the virus.

I started writing this post before finishing my coffee this morning, and so I missed this great article in the Washington Post:

Airports around the country were thrown into chaos Saturday night as workers scrambled to roll out the Trump administration’s hastily arranged health screenings for travelers returning from Europe.

Scores of anxious passengers said they encountered jam-packed terminals, long lines and hours of delays as they waited to be questioned by health authorities at some of the busiest travel hubs in the United States.

The administration announced the “enhanced entry screenings” Friday as part of a suite of travel restrictions and other strategies aimed at slowing the spread of the coronavirus. Passengers on flights from more than two dozen countries in Europe are being routed through 13 U.S. airports, where workers check their medical histories, examine them for symptoms and instruct them to self-quarantine.

And WaPo even went there:

But shortly after taking effect, the measures designed to prevent new infections in the United States created the exact conditions that facilitate the spread of the highly contagious virus, with throngs of people standing shoulder-to-shoulder in bottlenecks that lasted late into the night.