How to (Not) Hydroxychloroquine COVID-19

The medical journal The Lancet published a study Friday which showed anti-malarial drug hydroxychloroquine (HCQ) — the same drug repeatedly pushed by Trump — does not work as intended against the virus which causes COVID-19.

NEW Research—No evidence of benefit for #chloroquine and #hydroxychloroquine in #COVID19 patients, urgent randomised trials are needed: finding from a large observational study of nearly 15,000 patients with #COVID19 & 81,000 controls https://t.co/P4YbYVhRDZ

Hydroxychloroquine’s precursor drug, chloroquine, has shown mild antiviral action in vitro against the Borna disease virus (an orthobornavirus), the minute virus of mice MVMp (a parvovirus), and the avian leukosis virus (a retrovirus) as well as the coronavirus which causes SARS. It has also shown promise against Hepatitis A (a hepatovirus).

But both hydroxychloroquine and chloroquine posed inherent risks to patients as they increased the risk of heart arrhythmia.

Ideally, HCQ’s antiviral effect would prevent the coronavirus SARS-CoV-2 from replicating, allowing the body to attack and remove the virus before it could attack human cells and spread through the body, resulting in earlier recovery from the infection.

Patients who received both HCQ, or its precursor chloroquine, with or without an additional antibiotic, did not recover faster than the cohort which didn’t receive chloroquine.

Further, the patients receiving the drug therapies were more likely to die than those who didn’t.

– 1 in 11 patients in the control group died

– 1 in 6 patients treated with chloroquine or hydroxychloroquine alone died

– 1 in 5 treated with chloroquine and an antibiotic died

– 1 in 4 treated with hydroxychloroquine and an antibiotic diedhttps://t.co/mLtnZCaEWg

This study is the latest showing HCQ or chloroquine both didn’t work and increased patient mortality. Previous negative studies included:

Findings In this phase IIb randomized clinical trial of 81 patients with COVID-19, an unplanned interim analysis recommended by an independent data safety and monitoring board found that a higher dosage of chloroquine diphosphate for 10 days was associated with more toxic effects and lethality, particularly affecting QTc interval prolongation. The limited sample size did not allow the study to show any benefit overall regarding treatment efficacy.

CONCLUSIONS: In this study, we found no evidence that use of hydroxychloroquine, either with or without azithromycin, reduced the risk of mechanical ventilation in patients hospitalized with Covid-19. An association of increased overall mortality was identified in patients treated with hydroxychloroquine alone. These findings highlight the importance of awaiting the results of ongoing prospective, randomized, controlled studies before widespread adoption of these drugs.

We still don’t know why Trump is pushing this drug. It’s no longer under a patent and now a generic medication; it’s cheap to produce. If there’s money to be made by promotion of this medication it’s not clear how Trump profits.

We still can’t be certain he’s taking it himself though he claims he is; the letter from his doctor does not clearly state that Trump has been prescribed HCQ and at what dosage for what period of time nor has there been any information provided with regard to the nature of monitoring Trump receives while taking HCQ. 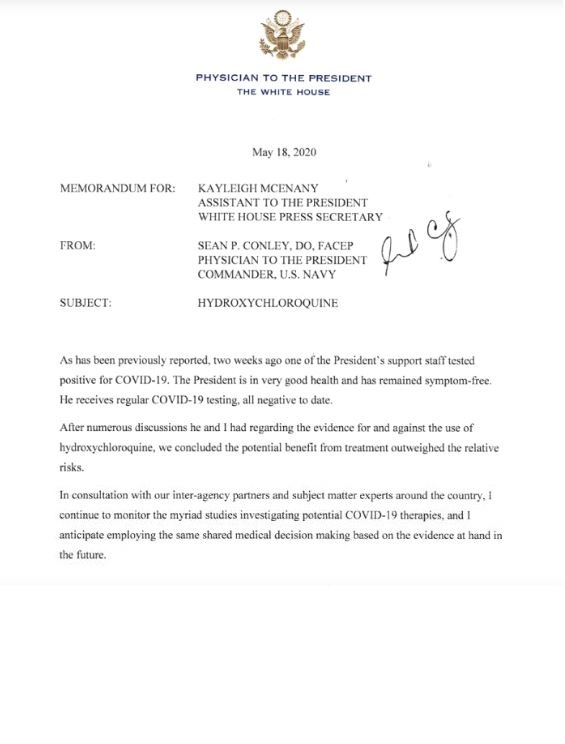 We don’t know why Trump would claim to take HCQ on the advice of some unknown person alleging to be a doctor. We’ve no further information about the letter, the letter’s author, whether a letter even existed since Trump has a proven propensity for making up shit.

“I happen to be taking it … right now, yeah” — Trump claims he’s taking hydroxychloroquine, a drug he’s touted as a potential coronavirus treatment despite a lack of evidence that can lead to potentially fatal heart problems pic.twitter.com/zxiNxlyfEs

All we can be sure of at this point is that more patients with COVID-19 may have died, potentially because of HCQ’s promotion by Trump, than may have died had he refrained from practicing medicine without a license by pushing HCQ.

In the case of the study of HCQ at Veterans Health Administration medical centers, former service persons who’ve already paid a price for our freedoms have been used in human experimentation in what might have been an attempt to validate Trump’s claims about HCQ — and some of them died for it.

It seems odd VA doctors used it out of the clear blue when the Food and Drug Administration hadn’t formally approved this drug for COVID-19 patients. (It’s probably just a coincidence the Center for Disease Control lifted its guidance on off-label use of HCQ two weeks before the VA study was published, right?)

It’d be nice to know if Trump’s three golf buddies at Mar-a-Lago — one of then a doctor — had anything to do with the use of HCQ and chloroquine at VA hospitals on COVID-19 patients.

There’s simply no good reason for Trump’s plugging this particular drug therapy except to harm and kill Americans.