Ben Wittes Gets Stung by the Trump Effect 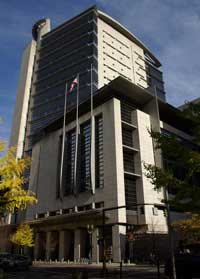 WaPo has a report that DHS disseminated intelligence reports discussing tweets about leaked unclassified materials describing that DHS knows fuckall about the protests in Portland.

Over the past week, the department’s Office of Intelligence and Analysis has disseminated three Open Source Intelligence Reports to federal law enforcement agencies and others, summarizing tweets written by two journalists — a reporter for theNew York Times and the editor in chief of the blog Lawfare — and noting they had published leaked, unclassified documents about DHS operations in Portland. The intelligence reports, obtained by The Washington Post, include written descriptions and images of the tweets and the number of times they had been liked or retweeted by others.

After The Post published a story online Thursday evening detailing the department’s practices, the acting homeland security secretary, Chad Wolf, ordered the intelligence office to stop collecting information on journalists and announced an investigation into the matter.

The WaPo specifically notes that normally this kind of thing only happens with terrorism and other violent actors.

Some of the leaked DHS documents the journalists posted and wrote about revealed shortcomings in the department’s understanding of the nature of the protests in Portland, as well as techniques that intelligence analysts have used. A memo by the department’s top intelligence official, which was tweeted by the editor of Lawfare, says personnel relied on “FINTEL,” an acronym for financial intelligence, as well as finished intelligence “Baseball cards” of arrested protesters to try to understand their motivations and plans. Historically, military and intelligence officials have used such cards for biographical dossiers of suspected terrorists, including those targeted in lethal drone strikes.

The DHS intelligence reports, which are unclassified, are traditionally used for sharing the department’s analysis with federal law enforcement agencies, state and local officials, and some foreign governments. They are not intended to disseminate information about American citizens who have no connection to terrorists or other violent actors and who are engaged in activity protected by the First Amendment, current and former officials said.

The tweets were sent by Ben Wittes and NYT’s Mike Baker.

Wittes wrote a long thread in response, suggesting he may take further action, and complaining, in particular, that discussion of his tweets was disseminated as intelligence reporting. 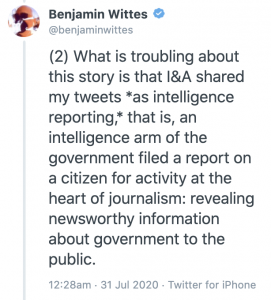 Welcome to the Trump Effect, Ben.

I have long argued that the President created something I call the Trump Effect, which makes things that the US has long done — like abusive treatment of undocumented immigrants, counterproductive use of violence overseas, and excessive intelligence collection — visible to people like mainstream voters and some kinds of national security commentators.

Here, Wittes is specifically complaining about policies he and Lawfare have, in the past, applauded, a special category of intelligence collection — even collection of speech otherwise protected under the First Amendment — targeted at those believed to pose a unique threat to national security. I’ve tangled with Lawfare in the past over whether such policies disproportionately constrain Muslim speech. And I noted — in response to a Pollyannish prediction from Wittes that Trump wouldn’t be that bad in part because this kind of intelligence is focused primarily overseas that, no, it had already been deployed against Black Lives Matter, precisely the movement it is currently being deployed against.

Consider: One of the most inflated cases of terrorism in recent decades was Mohamed Osman Mohamud, a guy whose father asked the FBI for help because the father worried that the son was being radicalized. Rather than helping, the FBI targeted Mohamud — who was in contact with AQAP propagandist Samir Khan — in a sting. After over a year (probably more than a year), they got the teenager to press a button he thought would detonate a bomb that targeted Pioneer Square in Portland, the site of the historic courthouse. During his prosecution, the FBI wiretapped several lawyers representing Mohamud. The FBI almost  certainly cultivated him after doing back door searches targeting Samir Khan and others. Mohamud, now 28, still has 16 years left on his 30 year sentence, assuming time off for good behavior.

I’m not saying Mohamud, after being radicalized (partly by FBI informants and undercover officers) posed no danger. But the danger and the special authorities used against him were all premised on his intent to do damage to the historic courthouse a few blocks aware from the Federal Courthouse, the very same rationale Billy Barr has repeatedly cited for sending Federal officers to incite more violence in Portland. Whatever you want to call the damage done by a handful of protestors in Portland, it is real damage, unlike what Mohamud got incited by Federal officers to commit.

And using the framework that Lawfare has largely applauded, Trump’s national security establishment has now targeted the First Amendment activities of those deemed to exist in a network, however diffuse, that also includes those “supporting” violence in Portland.

None of this makes what DHS has done right. And, because Wittes and the NYT are public figures with access to powerful lawyers (unlike the great majority of journalists covering Portland’s stand-off), Acting DHS Secretary Chad Wolf reversed course.

But the response should not just be a complaint about how Trump and Barr have treated protestors and journalists and lawyers using the same approach that Wittes long applauded to be used with terrorists, one that long ago dispensed with the need to have a real nexus overseas. It should also be an urgent call to reexamine how we have investigated Muslims in the name of terrorism, particularly as the FBI continues to have such success investigating white supremacist terrorism without using this framework.

Update: I’ve been getting the two courthouses in Portland confused all morning. Hopefully I’ve fixed it now.