As noted, Peter Strzok’s lawyer has confirmed something I laid out earlier: DOJ submitted at least two sets of Strzok’s notes in its effort to blow up the Mike Flynn prosecution that had been altered to add a date that Strzok did not write himself.

I discovered that DOJ [or Flynn’s team] had altered Strzok’s notes because DOJ shared — and Sidney Powell submitted in purported support of her claim of prosecutorial abuse — two sets of those notes.

This set, shared on June 23 (the red rectangle is my annotation). 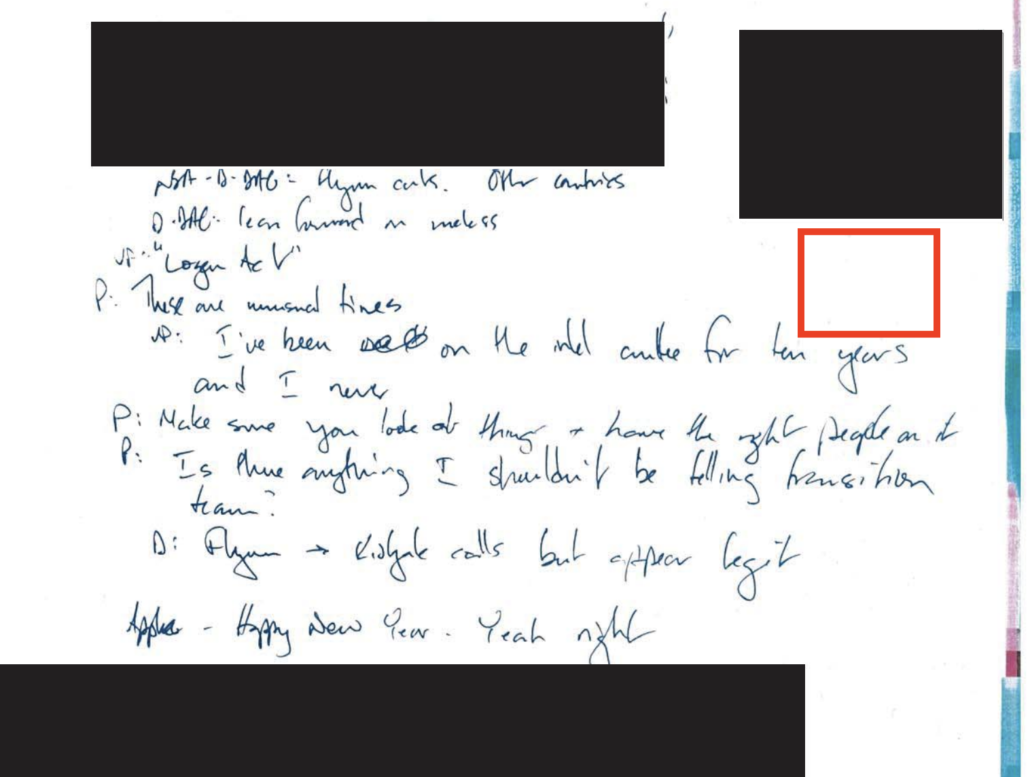 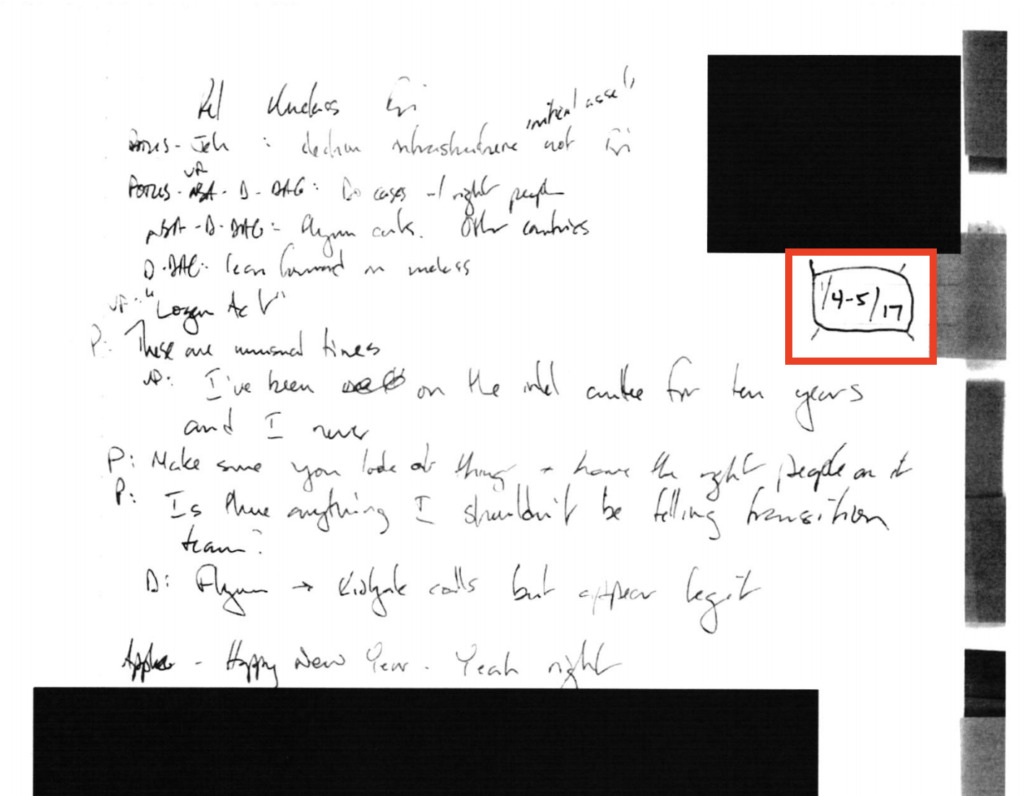 As Strzok’s lawyer, Aitan Goelman, explained that date is wrong.

On at least one occasion, the date added is wrong and could be read to suggest that a meeting at the White House happened before it actually did.

The correct date is January 5, 2017. The notes could not have been written on January 4 because they memorialize a meeting that happened on January 5.

As I demonstrated here, there was never a doubt about the date of the notes. They were written on January 5, 2017, after the meeting in question. The notes clearly match the known details — as laid out in this contemporaneous memo to the file by Susan Rice and elsewhere — of a meeting in the White House, attended by the President, Sally Yates, Joe Biden, Susan Rice, and Jim Comey, regarding what to do about the discovery that Mike Flynn had secretly called up the Russian Ambassador and undermined the sanctions President Obama imposed, in part, to punish the Russians for tampering in our election.

In spite of the fact that there was never a doubt that the notes were from January 5, 2017, when DOJ shared the notes with Powell, they claimed that DOJ was uncertain of their date, and claimed falsely they could have been from January 3, 4, or 5.

This page of notes was taken by former Deputy Assistant Director Peter Strzok. While the page itself is undated; we believe that the notes were taken in early January 2017, possibly between January 3 and January 5.

Then, having been told, falsely, that the date of the notes was uncertain, Sidney Powell claimed they had been written on January 4, and used that to falsely claim that the idea of investigating Mike Flynn under the Logan Act came from Joe Biden.

Thus far, all DOJ did was falsely claim not to know key details of this investigation, allowing Powell to set off a frenzy designed to impact the election.

But then DOJ [or Flynn’s team] submitted the second version of the notes and Powell submitted them again, claiming they pertained to a March 2017 meeting.

Now, had DOJ told Powell when they shared the altered notes and told Judge Sullivan, by association, when they filed the notice of discovery correspondence (belatedly) last night that these were annotated copies of Strzok’s notes, they would not be at risk of committing the crime of making false statements by altering a record (the same crime Kevin Clinesmith pled guilty to). Had they just explained, “these come from so-and-so’s investigative notebooks and they show that he, the investigator, [falsely] concluded that the notes could be from January 4, 2017 and that’s why poor Sidney Powell made a false, still-uncorrected attack on Joe Biden in a filing before this court,” then this wouldn’t be a problem. I mean, they’d still have to explain why they submitted an altered copy of the notes, rather than just correcting the record before Sullivan. But it would not amount to a false representation that these were — as Ballantine’s letter to Powell claimed they were — “handwritten notes of former Deputy Assistant Director Peter Strzok (23501 & 23503).”

But now it is the case that the record before Sullivan shows that DOJ [or Flynn’s team] submitted these altered notes while claiming that they were Strzok’s hand-written notes (having already submitted proof that the annotation is not part of the original).

It’s not just that — as Goelman explained — the notes, “could be read to suggest that a meeting at the White House happened before it actually did.”

It’s that DOJ already did read the notes to suggest a meeting happened before it actually did. DOJ, and by association, Flynn’s lawyer, already made that false claim. And they did so specifically to support an attack on Presidential candidate Joe Biden.

Update, 9/30: I’ve altered this to reflect that the alterations to the notes could have come from Flynn’s team, which might explain why Sidney Powell was so nasty about Strzok’s lawyer’s letter yesterday.