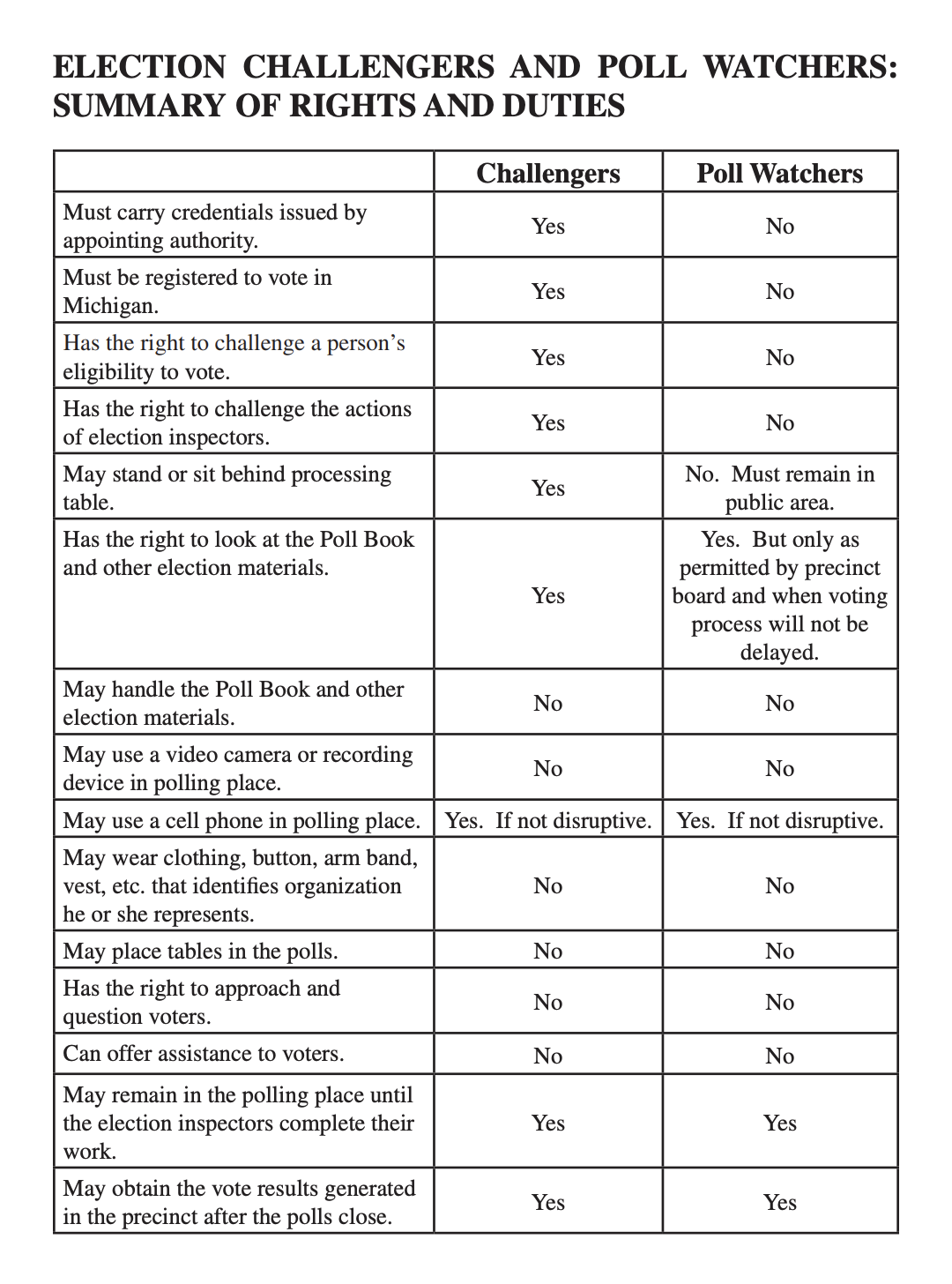 The reporting on the GOP lawsuits continues to be problematic with regards to election law. Take this Washington Post story, by otherwise credible journalists. It uses the word “challenger” three times — once in a caption, once in a direct quote from an affidavit, and once in a paragraph observing that people don’t understand Michigan election law.

They often seemed hampered by a lack of knowledge about Michigan’s election system. One challenger noted with concern that a group of absentee ballots “appeared in pristine condition, as if they had never gone through the U.S. Postal Service.” Michigan allows voters to drop off absentee ballots in drop boxes or at clerks’ offices, avoiding the mail, although it is not clear the circumstances around those ballots.

There are both poll “challengers” and “watchers” in Michigan. The former must be credentialed and are very limited in terms of number and actions at the polls. The latter are limited in where they can go in a regular precinct and cannot go into non-public areas (which the vote counting at TCF in Detroit would have been after it was closed for overcrowding). Here’s a quick guide for the difference during elections. 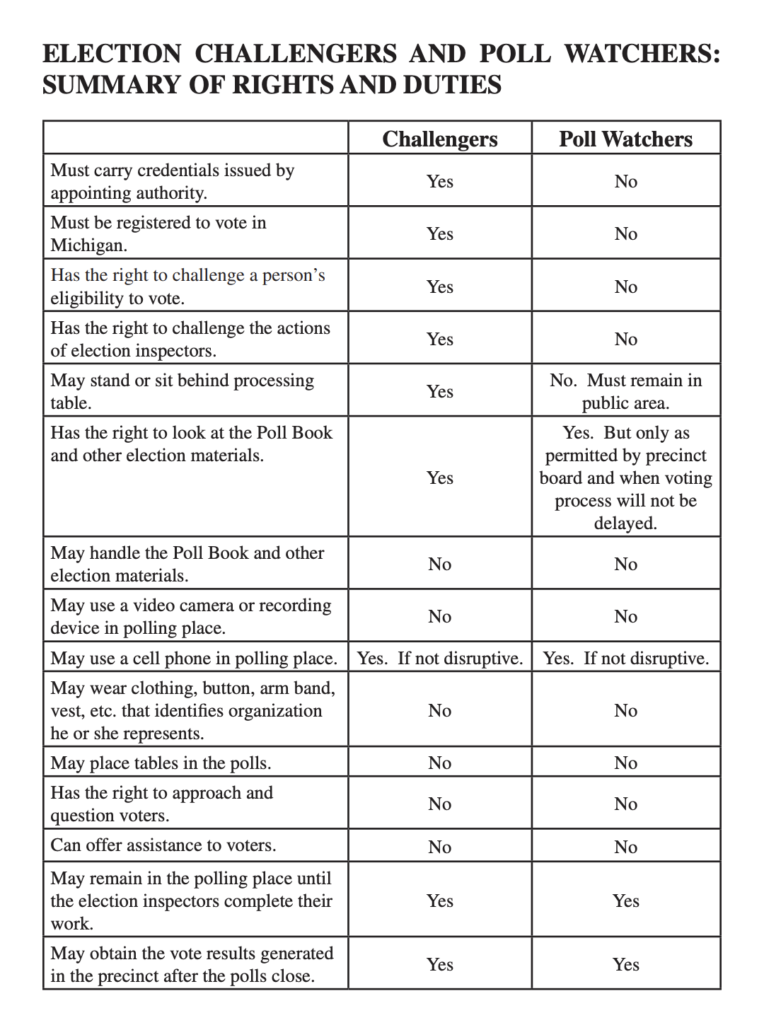 Generally, poll “watchers” are people from the party who monitor whether they’re getting their own voters out. “Challengers” are the only ones who are permitted to monitor the conduct of the election (they’re often lawyers, but sometimes bossy people like me perform the function).

According to the affidavits submitted as part of the MI lawsuit, a significant number of the affiants do not claim to have been poll “challengers.” Others do and include both descriptions of the training they received and the hours they were credentialed to be “challengers,” which suggests the ones that don’t mention being challengers probably weren’t.

A big part of the faux scandal in Detroit was that the GOP “watchers” were prohibited from being in the room, but in fact, they already had their designated number of “challengers” and many of the people clamoring at the door to be admitted weren’t “challengers” at all.

Any responsible report on these affidavits, then, must distinguish between the claims made by people who claim to have had a legal right to be in the room  or behind a table (in the case of normal polling locations), and those who make no such claim. Indeed, if someone who doesn’t claim to be a challenger complains that they weren’t permitted into the TCF count or got booted from it, they are effectively complaining that the law was properly enforced. For example, that appears to be the case for this complaint. 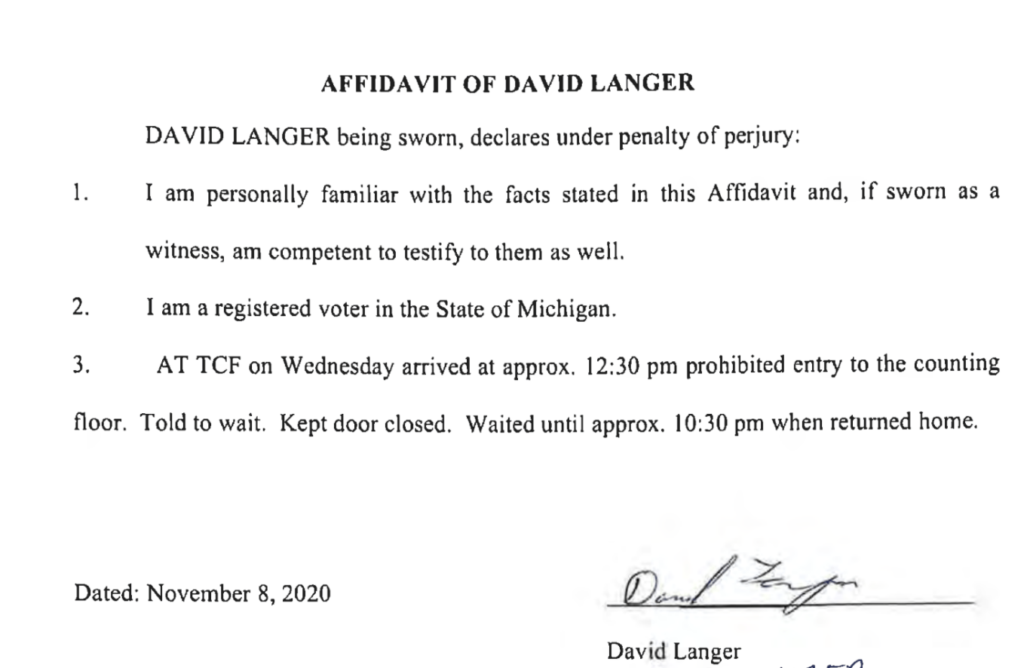 There’s a lot of blue dogshit flying around when there should be more focus on people who seem to have admitted they were illegally in a room demanding the right to interfere with vote counting.

Update: Here’s the full MI guide to being a poll challenger. Note the limit on numbers of challengers in rooms counting absentee ballots.

Those Complicit in Trump’s False Story about the Election Are Willingly... Some Details of Mueller’s GRU Indictment You Probably Missed