The Facts “Known to” the Mueller Investigation: Judge Sullivan Should Demand the December 22, 2016 Flynn Transcript

I wrote up four things that, if I were Judge Emmet Sullivan presiding over the Mike Flynn case, I would do:

I’ve been thinking especially about what may be unconstitutional vagueness in Trump’s pardon, which purports to pardon Flynn for any facts “known to” the Mueller investigation. How do you circumscribe facts “known to” an investigation? After all, the entire Justice Manual and a lot of US code was “known to” those who conducted the investigation. Much of Flynn’s biography became “known to” investigators. Is Flynn pardoned for anything pertaining to that? That would be prospective immunity that goes well beyond the President’s pardon power. And how can Trump pardon crimes “related” to the investigation that have not yet been committed (if, for example, Flynn were to become a lobbyist for Russia based on the warm relationship he established by lying to protect them and chose not to register as a foreign agent for them)?

And so in addition to forcing Trump to name the crimes for which he is pardoning Flynn (at least with respect to all those before Sullivan, which include his charged false statements, the selling out to Turkey related crimes that were part of the plea, and crimes committed in Sullivan’s court room and the EDVA grand jury), it seems Sullivan may have the ability to lay out what is included in that “known to” language.

As part of that, Sullivan may have the authority to demand that DOJ file all of Flynn’s 302s as well as the transcripts of Flynn’s calls with Sergey Kislyak (Sullivan might also ask DOJ to lodge the grand jury testimony implicating Flynn, because that, too, defines the scope of the pardon).

I’m certain that DOJ is trying to hide those 302s, but I also don’t think there’s anything all that surprising in there (indeed, I think we’d find that Flynn was knowingly shading testimony). But I still think it legally sustainable, not least because there’s reason to believe Flynn committed a crime with respect to a fact that I suspect was not known to Mueller, because it may have been deliberately withheld (again, I’ll explain more in January). That probably won’t send Flynn to prison, but it should be recorded.

The transcripts, however, are more interesting. Bizarrely, DOJ never submitted the transcripts in this docket. Sullivan asked for them after the Mueller Report came out, but DOJ refused based on their true contention that nothing in Flynn’s case relied on the transcripts. But the Motion to Dismiss absolutely did rely on the transcripts, because it was premised on the claim that Flynn did nothing wrong on the calls. Ken Kohl even invoked them in the September hearing before Sullivan. But in spite of the fact that a selection of those transcripts were released, they were never submitted in this docket. Sullivan may be able to demand them, if only to avoid the problem of Constitutional vagueness pertaining to the scope of Flynn’s pardon, particularly with regards to what facts were known to Mueller.

That’s where things get interesting. Because DOJ made claims before Sullivan — that Flynn did nothing wrong on his calls to Kislyak — relying on the transcripts, but it specifically withheld the transcript of a call that was included in the criminal information: the December 22, 2016 call. 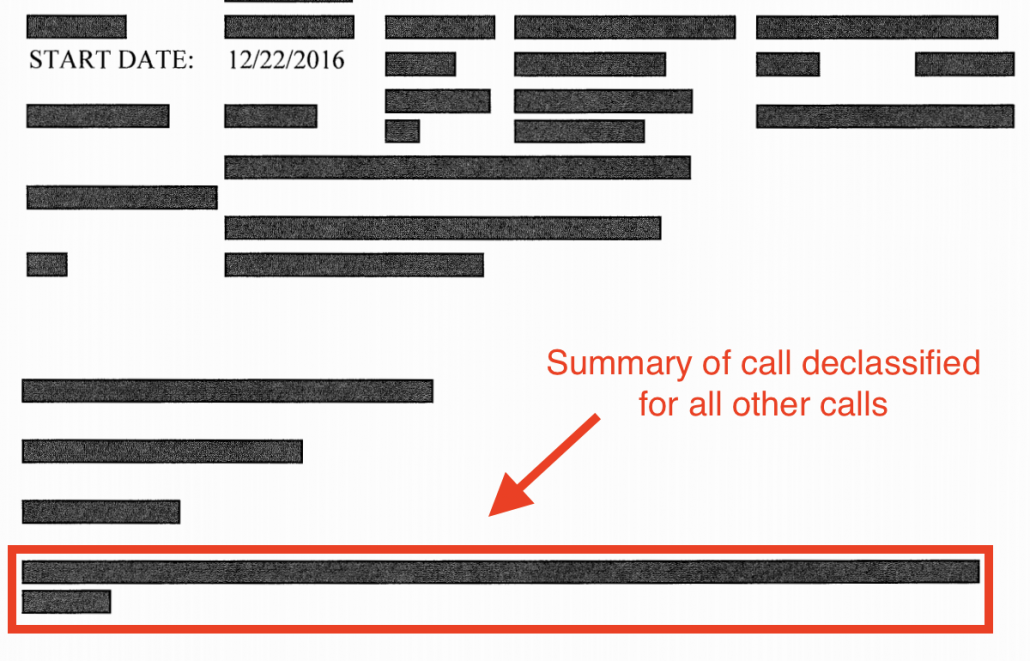 As I’ve noted, when ODNI released these transcripts, they didn’t even release the summary of the December 22, 2016 call included in Flynn’s charges, much the transcript.

I believe one of the facts “known to” Mueller’s investigators, but not known to us, is that Trump was present for that call, possibly even listening in. As such, it’s certainly within the scope of things for which Trump intends to pardon Flynn. But to avoid any confusion going forward that it is included, it needs to be known to us, or at least knowable to a future DOJ.

DOJ would squawk (they’ll squawk anyway, but that’s their own damn fault for writing a pardon that suffers from vagueness).

Again, I’m not saying that this provides Sullivan a way to dismiss the charges (though I see no reason why he can’t dismiss without prejudice). It doesn’t. What it does do is make a record of the true scope of the pardon.

The Last Trickle of the Mueller 302s before the Biden Storm A Mike Pence Pardon of Trump for Flynn’s Pardon Would Obstruct the Mueller...