Hope you were able to get out on the links this weekend if you’re a golfer and your local weather was good. The season here in Michigan is wrapping up this week or next from the looks of things.

Wonder when the course will close at Trump National Golf Club Westchester this year, if it hasn’t already?

Rolling Stone published another piece about the course; this time ex-employees dished about insurance claims made related to flooding at the course in 2011.

Recall that Trump reported in FEC financial filings that Westchester was worth an estimated $50 million.

Trump org fought with the local tax authority, insisting the course should have an assessed value of $1.4 million — much lower than the fire sale price of $7.5 million Trump paid for the course in 1996 when it went into foreclosure.

But the former insiders said Trump org claimed a loss of $1.3 million due to flooding in 2011.

There’s no indication at all that the golf course’s business was disrupted by the flooding, which one might think was likely if half or more of the course had been so badly damaged.

The local municipality sued Trump because of damage caused by changes to his course which disturbed water flows. It’s pretty obvious from a Google Maps terrain view that the water flows toward the municipality of Briarcliff from the Trump course so Trump and his organization can’t say they couldn’t have anticipated a problem in the event of heavy rains. 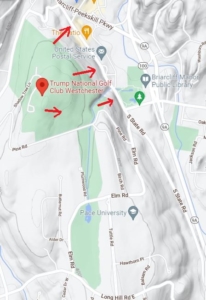 If you’re just Joe Duffer out on the course, you can see the manufactured water features — specifically two waterfalls denoted by red arrows — which must rely on water level being artificially maintained along with drainage in case of overflow. The creek and wash area have two feature cart bridges over them under which excess water should flow east in the direction of the red arrow. The waterfalls aren’t attractive unless the water is kept up high which means any extra water from surfaces like parking lots and fairways draining toward the pond will overflow rapidly into a wash which ends…???? 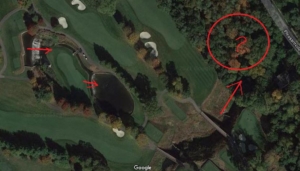 Somewhere under Pleasantville Road I hope there’s a big drain.

On the east side of Pleasantville Road is the Walter M. Law Park and the Briarcliff Manor Public Library. The park includes tennis courts, a swimming pool, a baseball diamond, and a pond which looks like it might be fed from water coming from under Pleasantville Road.

In 2011, floodwaters damaged the park area, causing heartburn for the local municipality:

The dispute began not long after a series of storms on June 23, 2011, dumped 5 inches of rain on the region. Waters swamped the village’s Law Memorial Park swimming pool and deposited silt about a third of a mile from the course, next to the Briarcliff Manor Public Library. Also flooded were the playing fields behind the swimming pool, where a geyser gushed from a manhole whose cover popped up from the drainage system blockage.

Briarcliff Manor met with Trump org several times about the damage and reparation. After hashing over the problem fruitlessly it billed Trump org $238,000 for the damage done because Trump’s course had made “unauthorized alterations” to the watercourse which elevated the waterfall ponds’ levels by up to six feet. Trump org denied doing anything to cause the problem, leaning into the argument that the rain was an unanticipated 300-year flood event.

Neighbors of the golf course were further upset by Trump’s balking at the property value assessment when Trump org argued the course owed only $47,000 and not $470,000 based on the much lower property value of less than $2 million.

That lower property tax amount is audacious considering Trump’s financial henchman Alan Garten claimed the flooding of the public park occurred because “…a drainage pipe under the village fields was clogged. It was clogged because the village [Briarcliff Manor] was too cheap to put up a grate to prevent rocks and boulders from coming in.”

(Where would the money come from, Garten? Tax revenues?)

What was it, then, the Trump org claimed against its insurance coverage compared to what they paid? Were the claims under investigation in relation to the 2011 flooding? Were they also in relation to more recent flooding due to high water levels from Hurricane Ida in August this year?

Or were there other claims we don’t know about yet?

What were the real terms of the settlement Trump org made with the local taxing authority, the Ossining Board of Assessment Review, when the Rolling Stone said,

The Trump Organization ultimately paid the town $50,000 to settle the lawsuit but, under the terms of the settlement, did not admit any wrongdoing, according to a copy of the settlement obtained in a request made under New York’s Freedom of Information Law. The settlement came on July 12, 2016, a few days before Trump accepted the Republican nomination for president.

50 grand seems suspiciously light when the engineering analysis to assess the problem and determine a solution likely cost the municipality more than that amount.

The timing is even more suspicious — how convenient the problem was resolved right then, before Trump’s campaign began in earnest.

The specifics of the agreement remain a mystery which seems to be par for this course and Trump’s organization.

John Durham May Have Made Igor Danchenko “Aggrieved” Under FISA “Yes and No:” John Durham Confuses Networking with Intelligence...