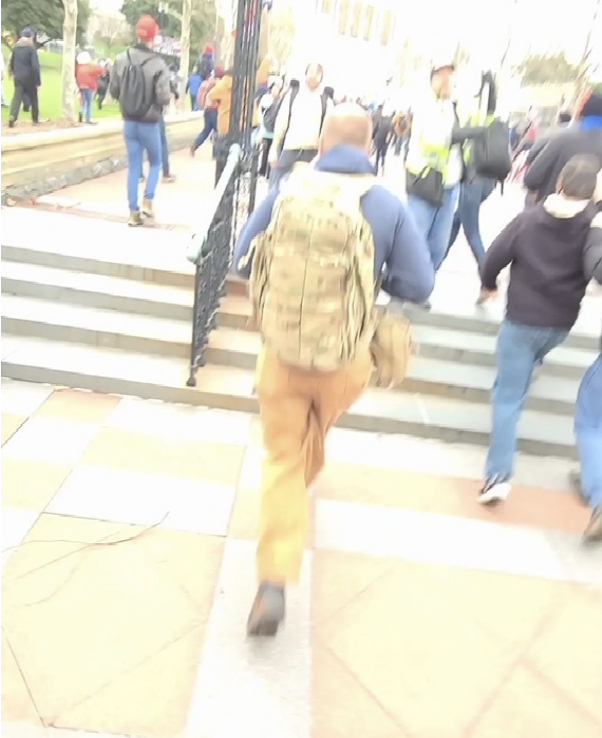 I’m writing a post on the limits of Matthew Greene’s knowledge of the larger Proud Boy plot on January 6, and therefore the bounds of his value as a cooperator (though his cooperation is really important, not least because it’ll lead others to follow his lead). Before I do so, I wanted to talk about the long motive paragraph included in his statement of offense.

He attested under oath yesterday that his intent on January 6 was to cause legislators and Mike Pence to act differently — implicitly, to either not certify any winner of the electoral college or name Trump the winner.

Greene’s intent in conspiring with others to unlawfully enter the restricted area of the Capitol grounds was to send a message to legislators and Vice President Pence. Greene knew the lawmakers and the Vice President were inside the Capitol building conducting the certification of the Electoral College Vote at the time the riot occurred. Green hoped that his actions and those of his co-conspirators would cause legislators and the Vice President to act differently during the course of the certification of the Electoral College Vote than they would have otherwise. Greene believed that by unlawfully entering the Capitol grounds, he and other rioters outside the building would send a stronger message to lawmakers and the Vice President, than if Green and others had stayed outside the restricted area. Green knew that the Capitol grounds he intended to enter were lawfully guarded by U.S. Capitol Police at the time he entered. Greene agrees that a reasonable foreseeable outcome, based on all the circumstances, taking into account the actions of other individuals, including Pezzola and Pepe, of his joining with members of the Proud Boys, to charge up the pedestrian walkway, into the West Plaza, and up the stairs under the Inauguration stage was that destruction of and/or damage to the U.S. Capitol or Capitol Grounds property would occur. [my emphasis]

This intent statement ties together several crimes used against a good many of the rioters on January 6, and not just Proud Boys:

Obstruction: The intent to cause Pence and others to act differently fulfills the mens rea requirement for obstruction. It does so in a transitive way, meaning the intent was to intimidate other people to act in a way counter to what their duty and justice demanded. That’s interesting because Judge Amit Mehta’s opinion on obstruction saw the mens rea requirement as intransitive. While this intent statement has evidence of intransitive mens rea as well, I think intimidation is the strongest application of obstruction on January 6. This, then, is a low level Proud Boy stating that the point of the riot was to intimidate Pence and others to get them to act a certain way.

Damage to the Capitol: As I have discussed repeatedly, the government is using the damage done to the Capitol, specifically the window that Dominic Pezzola broke in the first breach of the Capitol, to get to a terrorist enhancement that may expose defendants to far longer sentences. DOJ needs to prove that the damage Pezzola and others did was a reasonably foreseeable outcome of their efforts to obstruct the vote count to hold all the Proud Boys charged as co-conspirators accountable for the damage that Pezzola did. Here, Greene admits that that damage was foreseeable, and therefore exposes Pezzola, along with all the Proud Boys charged as co-conspirators, to that terrorist enhancement.

Trespassing: While there are ways that Greene’s cooperation is limited, it is significant that the first Proud Boy entering into a cooperation agreement did not enter the Capitol, as Greene did not. That’s because his intent statement adopts a broader understanding of the geographic area that might be deemed to contribute to the obstruction, to include the restricted area outside the building. This means it might incorporate others, like 3%er Guy Reffitt, Oath Keeper associates Thomas Caldwell and Bennie Parker, anti-masker Alan Hostetter, and Pied Piper of insurrection Alex Jones, in the scope of obstructive behavior, even if they didn’t enter the building. To be sure, DOJ will need to similarly prove the intent of each of these people; but by adopting this intent statement, Greene adopts it as the scope envisioned by the Proud Boys, the organizers of the entire assault.