First, before the rest of this post, a warning: if you have a Twitter account, active or inactive, go turn on 2FA.
Do it on a desktop or laptop, not your phone.
Be sure to obtain a single-use backup code for secure login in case you’re unable to use 2FA.*

There are too many reports right now of quirky things going on at Twitter. Just play it safe and protect your account.

It’s amazing how little drag billions of dollars provides in the face of gravity — and by gravity I mean the force hubris and ignorance may exert when they meet reality.

This observation is spot on after Thursday’s conference call with Twitter’s current owner, Elon Musk: 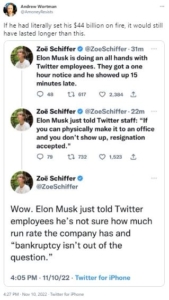 I don’t even dare embed the original tweet because it may disappear if the worst should come to pass and swaths of Twitter are shuttered to outside access.

How the hell did Musk, the head of SpaceX and Tesla, manage to burn up so much goodwill inside 16 days?

Let’s take a look at the timeline of events since Musk began buying stock in Twitter.

The last couple of items were added late Saturday night. I’m afraid to look and see what might have transpired since I checked last.

There’s no nice way to put this: this entire situation is fucked up and it’s all on Elon Musk.

The FTC is likely to punctuate this even further because of the egregious manner in which Twitter under Musk’s ownership has failed to comply with the 2011 consent decree. Musk ought to talk with Facebook’s Zuckerberg about how expensive this can be.

And there are humans who are going to pay for Musk’s cavalier behavior — families who might be expecting a child who are now dealing with COBRA, remote workers who are being forced back to the office in areas with severe housing shortages (that’d be Ireland, not just the U.S.). Musk has tweeted about this but this issue didn’t come up out of thin air, and like everything else so far has been handled badly.

There’s some question whether Twitter has adequate staffing related to compliance with EU regulations and GDPR and are they in Ireland.

Three points about Musk’s Twitter acquisition really boggle my mind after reading all this material. First,

Mr. Musk had brought his own advisers, many of whom had worked at his other businesses, such as the digital payments company PayPal and the electric carmaker Tesla. They parked themselves in the “war room,” on the second floor of a building attached to Twitter’s headquarters. The area, which Twitter used to fete big-spending advertisers and dignitaries, was stocked with company memorabilia. …

Musk is relying on the expertise of people in disparate businesses which have nothing to do with social media — unless Musk is already thinking he’s going to Johnny Mnemonic users’ heads with their Twitter accounts using Neuralink, a product which is likely to go nowhere since it is technically a medical device and it’s not ready for testing in humans.

The Boring Company, though. Really? Name a successful, profitable installation. Don’t mind me not holding my breath waiting, though.

There have been rumors Musk is surrounded by yes men and sycophants. We may now know who they are.

The scope of layoffs was a moving target. Twitter managers were initially told to cut 25 percent of the work force, three people said. But Tesla engineers who reviewed Twitter’s code proposed deeper cuts to the engineering teams. Executives overseeing other parts of Twitter were told to expand their layoff lists.

The people who engineer electric cars, the software of which is not safe for autonomous self driving, somehow understand enough about social media software used by hundreds of millions of accounts globally, 7/24/365, to make an assessment of staffing requirements.

They somehow understand the issues consumers, governments, industries, nonprofits/NGOs have had using and relying on this social media application since it was launched 16 years ago.

Clearly not since they missed the part about the FTC’s consent decree which might shape how any code is written, tested, rolled out, operates, and maintained.

Twitter executives also suggested assessing the lists for diversity and inclusion issues so the cuts would not hit people of color disproportionately and to avoid legal trouble. Mr. Musk’s team brushed aside the suggestion, two people said.

This is the same Elon Musk whose businesses have been sued more than once for discriminatory practices, pointedly choosing to ignore federal and state employment law.

It’s a pattern of behavior and it’s not acceptable, particularly if Musk’s corporations are beneficiaries of federal incentives.

We’re long overdue to regulate social media, not just because they are monopolistic and oligopolistic.

Nor should we as individuals be waiting for the moment we learn our personal data has been breached because a billionaire was sloppy and indifferent about its security though it’s a key facet of the business he bought for the lulz.

Democrats may have a majority in both houses of Congress next year. But they already have one now and they should use it immediately learn why Elon Musk thinks his new toy is above the law and beyond regulatory oversight.

__________
* I meant to add you should seriously consider deleting the Twitter app from your phone. I suspect there will be attempts to hack users’ accounts using the cell phone information Twitter has on record. Protecting this data was at the heart of the FTC’s consent decree.

Trump’s Secret Document, with the Post-Administration Pollster Communication,... In the Wake of Trump’s Third Electoral Failure, NYTimes Boasts of Hiring...