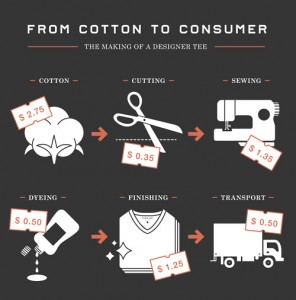 But these retailers are chasing very tiny cost reductions in the overall retail prices of garments. The graphic above is taken from a Tumblr post by retailer Everlane (they are touting their own business model of removing wholesalers, so they do have a particular point of view in promulgating the numbers). END_OF_DOCUMENT_TOKEN_TO_BE_REPLACED