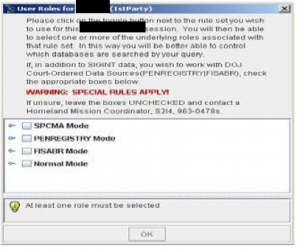 In December, I wrote a post noting that NSA personnel performing analysis on PATRIOT-authorized metadata (both phone or Internet) can choose to contact chain on just that US-collected data, or — in what’s call a “federated query” — on foreign collected data, collected under Executive Order 12333, as well. It also appears (though I’m less certain of this) that analysts can do contact chains that mix phone and Internet data, which presumably is made easier by the rise of smart phones.

Section 215 is just a small part of the dragnet

This is one reason I keep complaining that journalists reporting the claim that NSA only collects 20-30% of US phone data need to specify they’re talking about just Section 215 collection. Because we know, in part because Richard Clarke said this explicitly at a Senate Judiciary Committee hearing last month, that Section “215 produces a small percentage of the overall data that’s collected.” At the very least, the EO 12333 data will include the domestic end of any foreign-to-domestic calls it collects, whether made via land line or cell. And that doesn’t account for any metadata acquired from GCHQ, which might include far more US person data.

The Section 215 phone dragnet is just a small part of a larger largely-integrated global dragnet, and even the records of US person calls and emails in that dragnet may derive from multiple different authorities, in addition to the PATRIOT Act ones.

With that background, I want to look at one part of that dragnet: “SPCMA,” which stands for “Special Procedures Governing Communications Metadata Analysis,” and which (the screen capture above shows) is one way to access the dragnet of US-collected (“1st person”) data. SPCMA provides a way for NSA to include US person data in its analysis of foreign-collected intelligence.

According to what is currently in the public record, SPCMA dates to Ken Wainstein and Steven Bradbury’s efforts in 2007 to end some limits on NSA’s non-PATRIOT authority metadata analysis involving US persons. (They don’t call it SPCMA, but the name of their special procedures match the name used in later years; the word, “governing,” is for some reason not included in the acronym)

Wainstein and Bradbury were effectively adding a second way to contact chain on US person data.

They were proposing this change 3 years after Collen Kollar-Kotelly permitted the collection and analysis of domestic Internet metadata and 1 year after Malcolm Howard permitted the collection and analysis of domestic phone metadata under PATRIOT authorities, both with some restrictions, By that point, the NSA’s FISC-authorized Internet metadata program had already violated — indeed, was still in violation — of Kollar-Kotelly’s category restrictions on Internet metadata collection; in fact, the program never came into compliance until it was restarted in 2010.

By treating data as already-collected, SPCMA got around legal problems with Internet metadata

Against that background, Wainstein and Bradbury requested newly confirmed Attorney General Michael Mukasey to approve a change in how NSA treated metadata collected under a range of other authorities (Defense Secretary Bob Gates had already approved the change). They argued the change would serve to make available foreign intelligence information that had been unavailable because of what they described as an “over-identification” of US persons in the data set.

They also argued making the change would pave the way for sharing more metadata analysis with CIA and other parts of DOD.

The proposal appears to have aimed to do two things. First, to permit the same kind of contact chaining — including US person data — authorized under the phone and Internet dragnets, but using data collected under other authorities (in 2007, Wainstein and Bradbury said some of the data would be collected under traditional FISA). But also to do so without the dissemination restrictions imposed by FISC on those PATRIOT-authorized dragnets.

In addition (whether this was one of the goals or not), SPCMA defined metadata in a way that almost certainly permitted contact chaining on metadata not permitted under Kollar-Kotelly’s order.

“Metadata” also means (1) information about the Internet-protocol (IP) address of the computer from which an e-mail or other electronic communication was sent and, depending on the circumstances, the IP address of routers and servers on the Internet that have handled the communication during transmission; (2) the exchange of an IP address and e-mail address that occurs when a user logs into a web-based e-mail service; and (3) for certain logins to web-based e-mail accounts, inbox metadata that is transmitted to the user upon accessing the account.

Some of this information — such as the web-based email exchange — almost certainly would have been excluded from Kollar-Kotelly’s permitted categories because it would constitute content, not metadata, to the telecoms collecting it under PATRIOT Authorities.

Wainstein and Bradbury appear to have gotten around that legal problem — which was almost certainly the legal problem behind the 2004 hospital confrontation — by just assuming the data was already collected, giving it a sort of legal virgin birth.

Doing so allowed them to distinguish this data from Pen Register data (ironically, precisely the authority Kollar-Kotelly relied on to authorize PATRIOT-authorized Internet metadata collection) because it was no longer in motion.

First, for the purpose of these provisions, “pen register” is defined as “a device or process which records or decodes dialing, routing, addressing or signaling information.” 18 U.S.C. § 3127(3); 50 U.S.C. § 1841 (2). When NSA will conduct the analysis it proposes, however, the dialing and other information will have been already recorded and decoded. Second, a “trap and trace device” is defined as “a device or process which captures the incoming electronic or other impulses which identify the originating number or other dialing, routing, addressing and signaling information.” 18 U.S.C. § 3127(4); 50 U.S.C. § 1841(2). Again, those impulses will already have been captured at the point that NSA conducts chaining. Thus, NSA’s communications metadata analysis falls outside the coverage of these provisions.

And it allowed them to distinguish it from “electronic surveillance.”

The fourth definition of electronic surveillance involves “the acquisition by an electronic, mechanical, or other surveillance device of the contents of any wire communication …. ” 50 U.S.C. § 1802(f)(2). “Wire communication” is, in turn, defined as “any communication while it is being carried by a wire, cable, or other like com1ection furnished or operated by any person engaged as a common carrier …. ” !d. § 1801 (1). The data that the NSA wishes to analyze already resides in its databases. The proposed analysis thus does not involve the acquisition of a communication “while it is being carried” by a connection furnished or operated by a common carrier.

This legal argument, it seems, provided them a way to carve out metadata analysis under DOD’s secret rules on electronic surveillance, distinguishing the treatment of this data from “interception” and “selection.”

This approach reversed an earlier interpretation made by then Counsel of DOJ’s Office of Intelligence and Policy Review James A Baker.

Baker may play an interesting role in the timing of SPCMA. He had just left in 2007 when Bradbury and Wainstein proposed the change. After a stint in academics, Baker served as Verizon’s Assistant General Counsel for National Security (!) until 2009, when he returned to DOJ as an Associate Deputy Attorney General. Baker, incidentally, got named FBI General Counsel last month.

And the description of the change …

Specifically, these new procedures permit contact chaining, and other analysis, from and through any selector, irrespective of nationality or location, in order to follow or discover valid foreign intelligence targets. (Formerly analysts were required to determine whether or not selectors were associated with US communicants.) [emphasis origina]

,,, Make it clear it is the same program.

NSA appears to have made a few changes in the interim. END_OF_DOCUMENT_TOKEN_TO_BE_REPLACED

As I noted in my last post, seven Bush dead-enders plus KS Representative and House Intelligence member Mike Pompeo wrote a letter to … someone … pushing back against the RNC condemnation of the NSA dragnet. As I noted in that post, along with waggling their collective national security experience, the dead-enders used the same old stale tricks to deny that the dragnet surveils US person content.

The stale tricks, by now, are uninteresting. I find the list of the dead-enders (Eli Lake fleshed it out here) more so.

Some of these we expect. Michael Hayden and Stewart Baker have been two of the main cheerleaders for NSA since the start of Snowden’s leaks, and Michael Chertoff’s firm (at which Hayden works) seems to be working under some kind of incentive to have as many of its top people defend the dragnet as well. Further, both Bradbury and Wainstein have testified to various entities along the way.

So in some senses, it’s the usual gang of dead-enders.

But I find the collection of Michael Mukasey, Bradbury, and Wainstein, to be particularly interesting.

After all, they’re the 3 names (and in Mukasey’s case, authorizing signature) on this memo, which on January 3, 2008 authorized NSA to contact chain Internet (and phone) “metadata” of Americans collected via a variety of means, including FISA, broadly defined, which would include Protect America Act, and EO 12333 and potentially other means — but let’s just assume it was collected legally, Bradbury and Wainstein say twice in the memo.

They implemented this change, in part, to make it easier to share “United States communications metadata” outside of the NSA, including with CIA, by name (though CIA made that request in 2004, before Hayden had moved over to CIA).

When implementing the change, they defined Internet “metadata” this way:

It includes IP (both sender and recipient, as well as interim), email address, inbox metadata which has reported to include content as well.

But let’s take a step back and remember some timing.

In 2004 DOJ tried to clean up NSA’s Internet metadata problem which legally implicated Michael Hayden directly (because he personally continued it after such time as DOJ said it was not legal). The solution was to get Colleen Kollar-Kotelly sign an opinion (dated July 14, 2004) approving the Internet collection as a Pen Register/Trap and Trace order. But she limited what categories of “metadata” could be collected, almost certainly to ensure the metadata in question was actually metadata to the telecoms collecting it.

Before the very first order expired — so before October 12, 2004 — the NSA already started breaking those rules. When they disclosed that violation, they provided some of the same excuses as when they disclosed the phone dragnet violations in 2009: that the people who knew the rules didn’t communicate them adequately to the people implementing the rules (see page 10ff of this order). As part of those disclosures, however, they falsely represented to the FISC that they had only collected the categories of “metadata” Kollar-Kotelly had approved.

The Court had specifically directed the government to explain whether this unauthorized collection involved the acquisition of information other than the approved Categories [redacted] Order at 7. In response, the Deputy Secretary of Defense [Paul Wolfowitz] stated that the “Director of NSA [Michael Hayden] has informed me that at no time did NSA collect any category of information … other than the [redacted] categories of meta data” approved in the [redacted] Opinion, but also note that NSA’s Inspector General [Joel Brenner] had not completed his assessment of this issue. [redacted] Decl. at 21.13 As discussed below, this assurance turned out to be untrue.