Yesterday, just a few hours before Charlie Crist was set to deliver what would be damning testimony in a US Senate hearing on the 2012 voting debacle in Florida, Rick Scott appeared on CNN and suddenly reversed himself on the issue of early voting.

Recall that the Florida legislature passed a horrible bill shortly after Scott narrowly won the 2010 election, cutting early voting days from 14 to 8, restricting registration efforts and purging voter lists so dramatically that the Department of Justice intervened on several issues in the law. Scott stood firm in supporting it. Just a few days before the election, as ridiculously long lines were reported in early voting, AP had this report:

On Saturday, some Floridians waited for hours on the last day of early voting. State officials say nearly 4 million early and absentee votes have been cast.

Scott and state officials have insisted there were no reasons to keep polls open beyond the eight days authorized in state law. The GOP-controlled Florida Legislature last year cut the number of early-voting days from a maximum of 14 days to eight. That reduction was upheld by federal courts.

As can be seen in the video above, Scott avoided mentioning his role in passing and signing the bill that created this year’s fiasco until called out by Soledad O’Brien. He tried to sound like a reasonable person proposing reasonable changes that will improve the situation, completely ignoring his role as an extremist who was instrumental in attempting to suppress the votes of hundreds of thousands of minorities in Florida.

Also yesterday, a Quinnipiac University poll provided some context for why Scott would find it necessary to reverse himself. His approval rating is strongly negative, while Charlie Crist, who recently joined the Democratic Party, retains an overall favorable rating, as does Alex Sink, who narrowly lost to Scott in 2010 but has already faded from voter recognition. From the poll:

Florida voters disapprove 45 – 36 percent of the job Gov. Rick Scott is doing, continuing his almost two-year run of negative scores, and, as he enters the second half of his term, voters say 52 – 30 percent that he does not deserve a second four-year term, according to a Quinnipiac University poll released today.

“Gov. Rick Scott’s ratings with voters are just plain awful. The numbers cannot be sugar-coated,” said Peter A. Brown, assistant director of the Quinnipiac University Polling Institute. “When voters in a politician’s own party want him to be challenged in a primary by another candidate, it’s difficult to see it as anything but outright rejection.

Ms. Sink is viewed favorably by 27 percent, and unfavorably by 14 percent, with 57 percent who haven’t heard enough about her to form an opinion.

Marc Caputo, in the Miami Herald, reports on Crist’s appearance later Wednesday in the Senate:

In a prelude to a long and bitter campaign, former Gov. Charlie Crist pointedly criticized Gov. Rick Scott during a U.S. Senate hearing Wednesday over an elections law that led to voting troubles and helped turn Florida into a “late-night TV joke.”

Crist suggested that Scott was the one to blame because he signed the election law in 2011 and, this year, the governor refused to extend in-person early voting hours despite lines that stretched for hours and discouraged many South Floridians from voting.

Crist contrasted that record with his own as governor in 2008, when he extended early voting hours.

“As Gov. Scott refused to take action to ease the lines, in some cases, those lines extended to six and seven hours,” Crist testified.

“The outcome of these decisions was quite obvious,” Crist said. “Florida, which four years earlier was a model for efficiency, became once again a late-night TV joke.”

Scott’s comments stunned Democrats, who had been harshly critical of Scott and the Republicans for the shortened early voting period as well as other provisions in the 2011 election law that they said were designed to suppress Democratic voters at the polls.

“It’s bordering on an alternative reality,” said former state Sen. Dan Gelber, D-Miami Beach, who wrote Scott urging him to extend the early voting hours after witnessing lines of voters waiting six to seven hours in Miami-Dade County. “He and his colleagues in the Legislature created precisely what happened.

“It was done purposely and willfully and now to pretend like they were surprised by it is utterly ridiculous.”

Given the polling on Scott’s popularity, it would appear that many Florida voters join Gelber in blaming Scott for the voting fiasco last month. 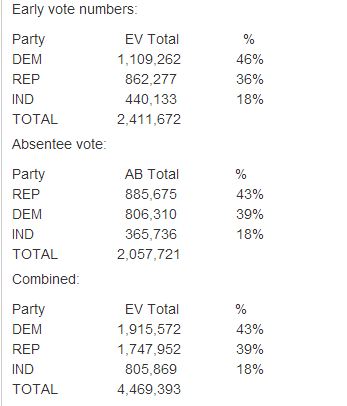