On March 25 I published a post in which I counted out the anticipated time required from a surge of new COVID-19 exposures to the date when the exposed persons would likely be recovered, dead, or free of SARS-CoV-2 virus.

At that time the last big public event at which people would have gathered closely and ignored social distancing was St. Patrick’s Day on March 17. Several states issued shelter-in-place/Stay Home orders after the last of the green beer was served, among them Michigan on March 23.

Which in turn has been used by the right-wing and white nationalists to foment unease and dissension among the Tea Party-ish types.

While the DeVos family denies having any ties to the Michigan Freedom Fund and the Michigan Conservative Coalition which organized the “Operation Gridlock” protest for this Wednesday in Lansing, somebody surely funded the groups behind these racist feckwits.

And somebody organized these mouthbreathing zombies in Ohio so they would protest in Ohio’s capital city Columbus at the same time. 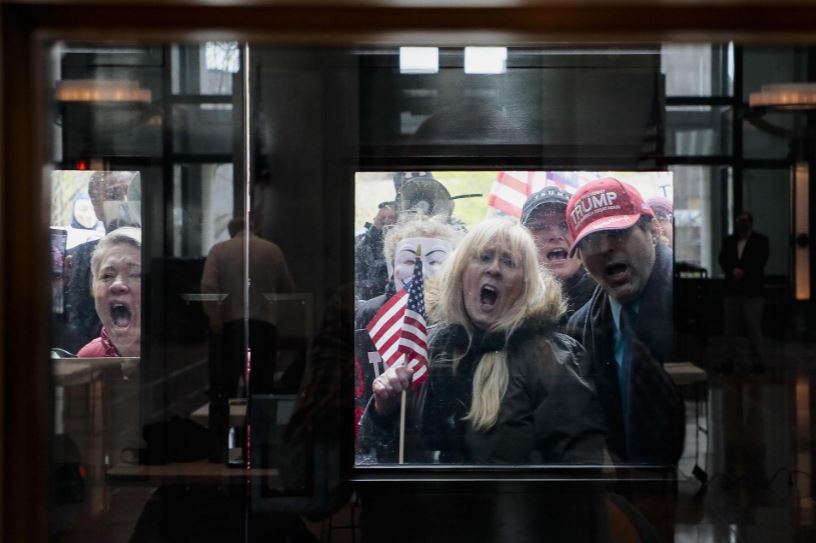 And somebody organized these sheep-dip-for-brains in Kentucky as well, also protesting in Kentucky’s capital city.

Sure feels like Tea Party 2.0, just missing the tea bags.

But it’s possible there’s some other entity behind this neatly coordinated multi-state tantrum. Let’s not forget that in 2016 a foreign influence operation persuaded Floridians to hold rally-like pro-Trump events via Facebook.

Somebody knows exactly who the easily motivated Trumpists are who would jump in their car on relatively short notice. It’s just not clear yet whether this was homegrown or if there was help from abroad. Such effort could explain the number of Trump flags and other pro-Trump paraphernalia present at these protests. It would also explain the presence of the far right Proud Boys.

Whatever the case, these whiny morons protesting the lockdowns in their respective states as incursions against their freedoms have likely spread COVID-19 amongst themselves due to their lack of adequate social distancing.

That photo of the mouthbreathers in Columbus fogging up the glass is a perfect example of the aerosolized exhalation humans give off and other humans breath in when there is poor air circulation and a lack of distance between humans. It’s highly possible this photo captured the moment of exposure between individuals. I do hope some well-masked journalist asked these people their names so they could follow up with them:

— in 5 days time when infection has likely set in and earliest symptoms begin;
— in 10-14 days when mild cases will have symptoms and severe to critical cases will seek medical treatment or hospitalization; and again
— in 21-28 days when the exposed have been hospitalized, treated, begun to recover, or died leaving their loved ones behind to answer questions.

We’ll be watching the calendar for the wave of new cases which will likely start this weekend.

Thanks to these thoughtless morons demanding their freedom to buy lawn fertilizer and visit their hair colorist right the fuck now, the rest of us could be looking at lockdown extended to Memorial Day.

Yes, it will be nearly the end of May until the secondary exposures and infections die out after the primary wave of new exposures recover or fade.

It was bad enough that we will likely have a small wave of new cases because of resistance from evangelical and fundamentalist Christian churches which insisted on holding services for Easter. Those exposures would result in new cases from a primary exposure requiring recovery through the first week of May.

Freedom for the rest of us is sadly dependent on waiting out the illness and death of the persuadable and stupid.