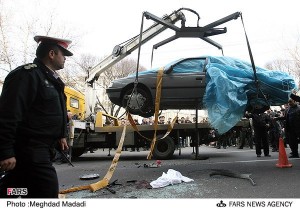 It appears that the US is having a bit of trouble with message management over its actions in relation to Iran. Over at Moon of Alabama, b reports on an embarrassing incident yesterday in which transcription from a “senior administration official” in the Washington Post got a bit too candid and had to be revised. The initial version of the story stated that “The goal of U.S. and other sanctions against Iran is regime collapse“, but the story has been changed to “The Obama administration sees economic sanctions against Iran as building public discontent that will help compel the government to abandon an alleged nuclear weapons program”. Oops!

It will be harder to edit the message inherent in today’s actions in Iran if the US was involved. Less than 24 hours after the announcement of the start of operations at the Qom enrichment facility, a high-ranking scientist at the Natanz enrichment facility was assassinated:

Iran said one of its nuclear scientists was killed on Wednesday by a magnet bomb fixed to his car by a motorcyclist and blamed Israel for the attack, intensifying diplomatic tensions the West over Tehran’s nuclear program.

An Iranian university professor and deputy director at Natanz enrichment facility was killed in a terrorist bomb blast in a Northern Tehran neighborhood on Wednesday morning.

The magnetic bomb which was planted by an unknown motorcyclist under the car of Mostafa Ahmadi Roshan Behdast, a professor at Tehran’s technical university, also wounded two other Iranian nationals in Seyed Khandan neighborhood in Northern Tehran.

Ahmadi Roshan, 32, was a graduate of oil industry university and a deputy director of Natanz uranium enrichment facility for commercial affairs.

The Reuters article gives us the dates of previous assassinations of Iranian nuclear scientists:

Two daylight bomb attacks on the same day in Tehran in November 2010 killed one nuclear scientist and wounded another. Physics lecturer Masoud Ali Mohammadi was killed in January 2010, when a remote-controlled bomb attached to a motorcycle exploded near his car in Tehran.

Recall that the US is known to be carrying out covert actions in Iran:

The language was inserted into the Finding at the urging of the C.I.A., a former senior intelligence official said. The covert operations set forth in the Finding essentially run parallel to those of a secret military task force, now operating in Iran, that is under the control of JSOC. Under the Bush Administration’s interpretation of the law, clandestine military activities, unlike covert C.I.A. operations, do not need to be depicted in a Finding, because the President has a constitutional right to command combat forces in the field without congressional interference. But the borders between operations are not always clear: in Iran, C.I.A. agents and regional assets have the language skills and the local knowledge to make contacts for the JSOC operatives, and have been working with them to direct personnel, matériel, and money into Iran from an obscure base in western Afghanistan. As a result, Congress has been given only a partial view of how the money it authorized may be used. One of JSOC’s task-force missions, the pursuit of “high-value targets,” was not directly addressed in the Finding. There is a growing realization among some legislators that the Bush Administration, in recent years, has conflated what is an intelligence operation and what is a military one in order to avoid fully informing Congress about what it is doing.

“This is a big deal,” the person familiar with the Finding said. “The C.I.A. needed the Finding to do its traditional stuff, but the Finding does not apply to JSOC. The President signed an Executive Order after September 11th giving the Pentagon license to do things that it had never been able to do before without notifying Congress. The claim was that the military was ‘preparing the battle space,’ and by using that term they were able to circumvent congressional oversight. Everything is justified in terms of fighting the global war on terror.” He added, “The Administration has been fuzzing the lines; there used to be a shade of gray”—between operations that had to be briefed to the senior congressional leadership and those which did not—“but now it’s a shade of mush.”

Just as he has been happy to maintain and even extend Bush administration policies on indefinite detention, it appears that President Obama is happy to maintain the mushy state of oversight for actions inside Iran. Isn’t it amazing that in a battle that is often described as being one for hearts and minds, we use secret pieces of paper to make it legal to engage in the very same tactics we claim to be fighting?