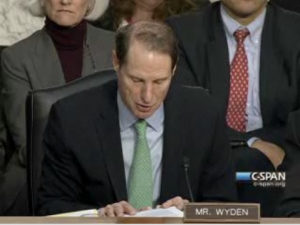 As I’ve suggested in my posts on US v Jones, the Justices seemed opposed to the kind of tracking we believe the government is doing under Section 215 of the PATRIOT Act. Yet of the three opinions ruling the warrantless use of GPS tracking in the case improper, only Sonia Sotomayor spoke broadly enough to make it clear that the Secret PATRIOT application is unconstitutional.

Ron Wyden (who, remember, wrote a column on Jones’ application to Secret PATRIOT) used yesterday’s Threat Assessment hearing to try to get James Clapper to commit to whether US v Jones makes Secret PATRIOT illegal. (2:25)

Clapper: Sir, the judgment rendered was, as you stated, was in a law enforcement context. We are now examining, and the lawyers are, what are the potential implications for intelligence, you know, foreign or domestic. So, that reading is of great interest to us. And I’m sure we can share it with you. [looks around for confirmation] One more point I need to make, though. In all of this, we will–we have and will continue to abide by the Fourth Amendment.

Given Clapper’s quick invocation of the law enforcement context, I suspect the Intelligence Community’s lawyers are planning to use the language in Samuel Alito’s concurring opinion addressing “extraordinary offenses”…

We also need not consider whether prolonged GPS monitoring in the context of investigations involving extraordinary offenses would similarly intrude on a constitutionally protected sphere of privacy. In such cases, long-term tracking might have been mounted using previously available techniques.

…To claim that their intelligence application–“foreign or domestic”–would still permit the tracking of innocent citizens using their cell phones.

In any case, if Clapper is good on his word (though note, he said he’d give this interpretation to Wyden, not release it publicly), the government may finally tip its hand regarding its cell phone tracking of Americans.