How Does a Paper Personal Journal Survive a Fire?

Michael Calderone catches CNN not disclosing that their reporting purportedly based on “a source familiar with Ambassador Stevens’ thinking” was actually working off his personal journal which they had obtained and not disclosed to the FBI team investigating his killing.

On Wednesday on his show, “Anderson Cooper 360,” Cooper told Sen. John McCain (R-Ariz.) that “a source familiar with Ambassador Stevens’ thinking told us that in the months before his death he talked about being worried about the never-ending security threats that he was facing in Benghazi and specifically about the rise in Islamic extremism and growing al Qaeda presence.” The source, Cooper continued, “also mentioned [Stevens] being on an al Qaeda hit list.”

But what Cooper didn’t reveal at the time was that CNN’s sourcing was tied, at least partially, to Stevens’ thinking as written in his personal journal.

In one version of their explanation CNN said they “came upon” the journal (Calderone has the transcription).

We came upon the journal through our reporting and notified the family.

In another, they describe it consisting of seven pages in a hard-bound book.

The journal consists of just seven pages of handwriting in a hard-bound book.

Several things stink about this story. First of all, consider that the attack was in Benghazi, not Tripoli, where Stevens was stationed and where he presumably kept his personal affects. So for CNN to have “come upon” it in Benghazi, it presumably would have been on Stevens’ person when he was attacked. If that’s the case, how did it survive the fire [correction, smoke] that killed Stevens? 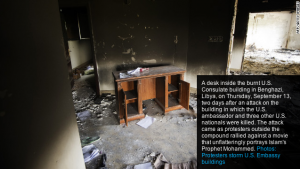 And consider the role of this picture. CNN included in its spread of pictures of the trashed Consulate. While it clearly shows that some papers did survive, the picture immediately following shows just ashes survived the flames. Also, this image shows the papers having been ransacked; we know that the attackers got sensitive papers. How likely is it that the attackers wouldn’t have taken the Ambassador’s personal journal, even while taking everything else of interest?

That suggests two possibilities. That the journal was on Stevens’ person when he was brought to the hospital, and the person who brought him (or someone in the hospital) gave it to CNN. Or, that the attackers got the journal and one of them got it to CNN (which might explain why CNN’s language here is so sketchy).

There is, of course, one other possibility: that the journal always remained in Tripoli, at the Embassy or the Ambassador’s residence, and one of the staffers shared it with CNN.

In any case, I suspect the reason CNN didn’t reveal they had the journal at first has to do with how they found it. But that may mean they have other relevant information about the attack.