John Galt’s Trail of Death and Destruction Continues to Grow 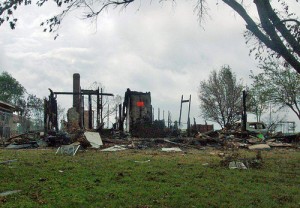 John Galt has been a deadly and destructive guy lately, with the largest of his most recent attacks taking place in the garment factory collapse in Bangladesh on April 24 where the death toll has now tragically topped 900 and the fertilizer storage facility explosion in West, Texas on April 17 that miraculously killed only fourteen people but injured over 200 and caused damage that is now estimated to exceed $100 million.

In an interesting development, Bangladesh has shown that at least on some fronts it is more civilized than Texas. Both the building’s owner and the engineer accused of colluding with the owner to add three unregulated floors on top of the building have been arrested, while Texas lawmakers, previously known for their refusal to vote in favor of disaster relief when it was in New York and New Jersey, now have called for socializing the losses in Texas. Of course, since the fertilizer plant owner (who has not been arrested) only carried $1 million in liability insurance (and since Texas doesn’t require liability insurance for many businesses operating with dangerous materials), those losses are bound to be socialized anyway.

From CBS News on the response to the disaster in Bangladesh:

Finance Minister Abul Maal Abdul Muhith spoke as the government cracked down on those it blamed for the disaster in the Dhaka suburb of Savar. It suspended Savar’s mayor and arrested an engineer who had called for the building’s evacuation last week, but was also accused of helping the owner add three illegal floors to the eight-story structure. The building owner was arrested earlier.

The government appears to be attempting to fend off accusations that it is in part to blame for the tragedy because of weak oversight of the building’s construction.

It looks like Muhith went a bit too far in trying to deflect responsibility from the government:

During a visit to the Indian capital, New Delhi, Muhith said the disaster would not harm Bangladesh’s garment industry, which is by far the country’s biggest source of export income.

“The present difficulties … well, I don’t think it is really serious — it’s an accident,” he said. “And the steps that we have taken in order to make sure that it doesn’t happen, they are quite elaborate and I believe that it will be appreciated by all.”

The article goes on to point out that Muhith had made a similar hollow promise to improve safety conditions several months ago when a fire in a garment factory killed over a hundred workers.

In a tragic testament to the shoddy conditions in these facilities in Bangladesh, we have word this morning of another eight deaths in a fire in a garment factory. However, this time the fire was after hours and it wasn’t workers who were killed:

The latest fire, in an 11-storey building in the Mirpur industrial district, broke out at a factory belonging to the Tung Hai Group, a large garment exporter.

“The factory was closed and all the workers had left the premises an hour earlier,” said fire service official Bhazan Sarker.

A fire service official and BGMEA president Islam said the Bangladeshi managing director of the company and a senior police officer were among the dead. The others killed were friends and personal staff of the factory boss, officials said.

Perhaps now that “important” people have been killed due to the unsafe construction of a garment factory, Bangladesh will get more serious about improving safety in these buildings rather than simply shrugging off the tragedies by saying they are mere accidents.

The response by Texas officials to the explosion in West is remarkably similar to Muhith blaming an “accident”.  Recall that in the immediate aftermath of the disaster, I found that one of the first profiles of the fertilizer facility owner focused on his church-going habits rather than on his long history of avoiding regulations.

Here is Bryce Covert at Think Progress on libertarian hero Ted Cruz and others in the Texas delegation suddenly calling for socialist federal help:

Some Texas Congressmen have also requested aid to help the victims and the town rebuild. Senator Ted Cruz (R-TX) said he is “working to ensure that all available resources are marshaled to deal with the horrific loss of life and suffering that we’ve seen.” Rep. Bill Flores (R-TX) has said that he, plus Senators Cruz and John Cornyn (R-TX), are working with Congressional leaders to extend necessary assistance. Cornyn has also said there is funding under his subcommittee for chemical site security standards and infrastructure protection.

Yet when Northeast cities needed disaster relief in the aftermath of Hurricane Sandy, a storm that killed hundreds, all three Congressmen voted against the aid package.

It appears that government and individuals will be left to absorb most of the costs of the $100 million in damages from the explosion, as the owner carried a laughably small liability insurance policy:

Tyler lawyer Randy C. Roberts said he and other attorneys who have filed lawsuits against West Fertilizer’s owners were told Thursday that the plant carried only $1 million in liability insurance. Brook Laskey, an attorney hired by the plant’s insurer to represent West Fertilizer Co., confirmed the amount Saturday in an email to The Associated Press, after the Dallas Morning News first reported it.

“The bottom line is, this lack of insurance coverage is just consistent with the overall lack of responsibility we’ve seen from the fertilizer plant, starting from the fact that from day one they have yet to acknowledge responsibility,” Roberts said.

He said he wasn’t surprised that the plant was carrying such a small policy.

Think about that “very little oversight of hazardous activities and even less regulation” in Texas and then consider that 41 other sites in Texas store large amounts of ammonium nitrate, which now has been confirmed as the source of the large explosion (although what triggered the explosion is still not completely described).

And, despite the fact that there is pitifully little regulation of these activities in Texas, the owner of West Fertilizer, when he wasn’t busy going to church, appears to have spent much of his time working to avoid what few regulations there were.

Given all the death and destruction in his wake, I have to wonder when John Galt will finally be added to the government’s terrorist list. He has certainly done more harm to the United States than officially designated terrorists  over the last ten years.