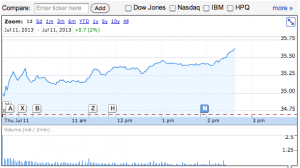 The Guardian has its latest scoop on NSA spying, describing the extent to which Microsoft helps the government spy on its customers. This bullet list is just some of what the article reveals.

But I’m as interested in some of the details about the cooperation as the impact of that cooperation.

For example, the story describes that this cooperation takes place through the Special Source Operations unit.

The latest documents come from the NSA’s Special Source Operations (SSO) division, described by Snowden as the “crown jewel” of the agency. It is responsible for all programs aimed at US communications systems through corporate partnerships such as Prism.

But we saw that when NSA approached (presumably) Microsoft in 2002, it did not approach via SSO; it used a more formal approach through counsel.

In addition, note how Skype increased cooperation in the months before Microsoft purchased it for what was then considered a hugely inflated price, and what is now being called (in other legal jurisdictions) so dominant that it doesn’t have to cooperate with others.

One document boasts that Prism monitoring of Skype video production has roughly tripled since a new capability was added on 14 July 2012. “The audio portions of these sessions have been processed correctly all along, but without the accompanying video. Now, analysts will have the complete ‘picture’,” it says.

Eight months before being bought by Microsoft, Skype joined the Prism program in February 2011.

According to the NSA documents, work had begun on smoothly integrating Skype into Prism in November 2010, but it was not until 4 February 2011 that the company was served with a directive to comply signed by the attorney general.

The NSA was able to start tasking Skype communications the following day, and collection began on 6 February. “Feedback indicated that a collected Skype call was very clear and the metadata looked complete,” the document stated, praising the co-operation between NSA teams and the FBI. “Collaborative teamwork was the key to the successful addition of another provider to the Prism system.”

While this isn’t as obvious as Verizon’s MCI purchase — which for the first time led that carrier to hand over Internet data — it does seem that those companies that cooperate with the NSA end up taking over their rivals.

Remember, the Department of Commerce plays some kind of role in ensuring that companies cooperate in protecting our critical infrastructure.