Why Has John Bogdan Not Yet Been Relieved of Command at Guantanamo? 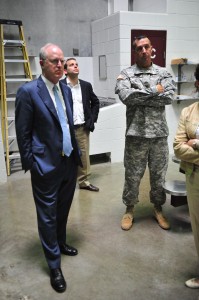 Bogdan was clearly put out by having to host Special Envoy Clifford Sloan, the new leader of the U.S. State Department’s Office of Guantanamo Closure, when he visited on July 2. I’m guessing he’s upset at the whole idea of closing Gitmo. (Defense Department photo)

It has been clear for some time that the current hunger strike crisis at Guantanamo can be laid squarely at the feet of John Bogdan, who heads the Joint Task Force Guantanamo Detention Group. In other words, he is the head of the guard force. As I noted in this post, Shaker Aamer’s attorney, in a statement to Andy Worthington, clearly blamed Bogdan for the actions that precipitated the hunger strike.

Yesterday, Judge Royce Lamberth dealt a severe setback to Bogdan, striking down one of his most needlessly abusive practices. From Charlie Savage at the New York Times:

A federal judge on Thursday ordered the military to stop touching the groins of detainees at the prison at Guantánamo Bay, Cuba, when they are moved from their cells to speak with lawyers. The procedure had led some prisoners to stop meeting with or calling their lawyers.

In a 35-page opinion, Judge Royce C. Lamberth, the chief judge of the Federal District Court for the District of Columbia, called the searches — which included guards wedging their hands between the genitals and thighs of the detainees as many as four times when moving them to a meeting and back to their cells — “religiously and culturally abhorrent” to Muslims. He portrayed the procedure as unnecessary and intended to “actively discourage” meetings with lawyers.

He said the warden, Col. John Bogdan, must return to a longtime procedure in which guards shake the underwear of detainees by the band to dislodge any contraband, but do not to touch their buttocks or genitals.

He also directed the military to allow detainees who are weak from hunger strikes to meet with their lawyers in the same buildings in which they are housed, and to stop using new transport vans that have low roofs that detainees had said required them to be painfully crouched while shackled.

Lawyers for detainees had argued that the motivation for the search procedure was not to enhance security but to isolate detainees from their attorneys in an effort to crush a growing hunger strike at the base. The hunger strike began in February as a reaction to guards searching detainees’ Korans. More than two-thirds of the 166 detainees at Guantanamo are participating in the protest, with more than 40 being force-fed.

Lamberth said the military’s action had to be judged in light of previous actions that limited the ability of attorneys to meet with their clients.

“As petitioners’ counsel correctly noted during this Court’s hearing, ‘[t]he government is a recidivist when it comes to denying counsel access,’ ” Lamberth wrote.

Recall that when public pressure finally got high enough over the abusive treatment of Bradley Manning at the Quantico Brig (where he was forced to stand naked) the government replaced the Brig Commander and then transferred Manning from Quantico to Leavenworth, where his treatment dramatically improved.

In the case of Guantanamo, many of the hunger-striking prisoners Bogdan is abusing (see this post from Marcy for more abusive practices) are already cleared for release, so the government should move quickly to release them to get them away from further abuse. However, considering Bogdan’s shaky background (I have mused that he may well have trained death squads in Iraq) and the public attention generated by the ICRC showing up at Guanantamo ahead of its scheduled date due to widespread knowledge of the latest round of abusive practices, it is clear that one of the most affirmative actions the US could take toward diffusing the situation would be to relieve Bogdan of command immediately.

Do Barack Obama and Chuck Hagel have the courage to the right thing and send Bogdan packing? I’m not holding my breath.

Update July 14: I am very embarrassed to have missed this important development Jason Leopold reported on May 23:

Military attorneys representing former CIA captives detained in a top secret camp at Guantanamo have called on Secretary of Defense Chuck Hagel to examine whether the head of the prison’s guard force is fit for command.

Col. John Bogdan, the commander of Guantanamo’s Joint Detention Group, has been singled out by the defense lawyers for revamping dormant policies, such as inspections of Qurans and genital patdowns, that gave rise to a hunger strike, now entering its fourth month.

“Although we represent so-called ‘high value detainees, many of our concerns relate to the treatment of all prisoners, to include men whose internment appears to be indefinite” states a 13-page letter and signed by nineteen attorneys, including several who represent self-professed 9/11 mastermind Khalid Sheikh Mohammed and Abd al Rahim al Nashiri, the alleged architect behind the USS Cole bombing, sent to Hagel on Monday. “There has been a serious degradation in the quality of life for detainees in Guantanamo Bay over the past year. This change appears to have coincided with the arrival of the new Joint Detention Group Commander, Col. John V. Bogdan.”

The letter was also reported on by MSNBC, where their article also cited a Seton Hall study and made the suggestion that Bogdan has perjured himself.