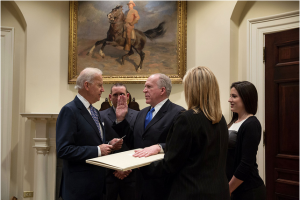 There’s a lot to be said about John Brennan’s appearance at the Council on Foreign Relations today (video here). I’m actually most interested in Brennan’s refusal, twice, to answer questions about whether the NSA needs to engage in bulk collection.

QUESTION: Good morning. Tom Risen with U.S. News and World Report. I’d like to follow up on some — talk about the intelligence gaps. Edward Snowden, yesterday, said that he’s accused the NSA’s mass surveillance of distracting from pinpointed, credible threats. Do you think from where you sit that there’s been any intelligence gaps in the NSA or the CIA on how they could conduct monitoring or spying better?

BRENNAN: Well, you know, anybody who violates their oath in terms of protecting sensitive classified information really has done a great disservice not just to the country, but also has put the American people at harm. NSA, CIA, and others now are looking at what it is that we need to do to mitigate whatever types of — of gaps that we might now face as a result of — of disclosures, publicly.

So we are trying to stay ahead of the challenge, do what we can, both in the HUMINT and SIGINT, as well as other fronts, working very closely with our intelligence partners. But, you know, distractions, you know, do take away from our focus on the — the substantive functional issues that really deserve our full attention.

MITCHELL: And can you [keep our country safe] without the mass collection of metadata?

BRENNAN: You know, there — there are a lot of challenges as that digital domain has changed. You know, you ask five people what metadata means, you know, they’ll have probably five different explanations. Probably three or four of them are going to be totally off the mark. Metadata itself is changing. You know, content, bulk data collection, these are things that, you know, really, you know, challenge the mind as far as, how are you going to ensure that if there is a terrorist in this country and he’s determined to do harm with, you know, a conventional explosive or a, you know, biological or chemical weapon, how are you going to be able to operate at the speed of light so that if you get intelligence you find out where that person is? You know, as I said, memories of 9/11, I think, recede in the smoldering ashes on the Manhattan landscape. [my emphasis]

Brennan first responds to Snowden’s claim by attacking his person, without addressing his claim. He then babbles about the challenge of thinking of bulk data. “Content, bulk data collection, these are things that, you know, really, you know, challenge the mind.” Which is a not very graceful way to dodge the question. But he doesn’t answer the question either time.

Most reporters, however, are focusing on Brennan’s prevarications in response to Dianne Feinstein’s statement today.

Well, first of all, we are not in any way, shape or form trying to thwart this report’s progression, release. As I said in my remarks, we want this behind us. We know that the committee has invested a lot of time, money and effort into this report, and I know that they’re determined to put it forward.

We have engaged with them extensively over the last year. We have had officers sit down with them and go over their report and point out where we believe there are factual errors or errors in judgment or assessments. So we are not trying at all to prevent its release.

As far as the allegations of, you know, CIA hacking into, you know, Senate computers, nothing could be further from the truth. I mean, we wouldn’t do that. I mean, that’s — that’s just beyond the — you know, the scope of reason in terms of what we would do.

This review that was done by the committee was done at a facility where CIA had a responsibility to make sure that they had the computer wherewithal in order to carry out their responsibilities, and so if there was any inappropriate actions that were taken related to that review, either by CIA or by the SSCI staff, I’ll be the first one to say we need to get to the bottom of it.

And if I did something wrong, I will go to the president, and I will explain to him exactly what I did, and what the findings were. And he is the one who can ask me to stay or to go.

Golly! We would never do any such thing as spy! And even if we get caught, only the President can make me leave, not the Committee.

But I’m most excited that Brennan chose to troll yours truly to introduce his talk.

Now just over a year ago, I had the privilege of placing my hand on the very first printed copy of the Constitution, a draft edited and annotated personally by George Washington himself that is one of the most treasured items held in the National Archives. With my hand on that document, Vice President Biden swore me in as the director of the Central Intelligence Agency.

I chose to take my oath on that precious piece of history as a clear affirmation of what the Constitution means to all of us at the agency. We have no higher duty than to uphold and defend the rule of law as we strive every day to protect our fellow citizens. Like so many things involving, CIA, though, people read nefarious intentions into my decision to take my oath on an early draft of the Constitution that did not contain the Bill of Rights, our Constitution’s first 10 amendments.

So at the risk of disappointing any conspiracy theorists who might be here today, let me assure all of you that I, along with my CIA colleagues, firmly believe in and honor not only the Constitution, but also the Bill of Rights, as well as all subsequent amendments to our Constitution. I just happen to be guilt of being an ardent admirer of George Washington and of the historical foundations of this great country. [my emphasis]

You’ll recall that I was among the first to point out that John Brennan staged a photo op at his swearing in, and either botched the photo op or unveiled his real beliefs, because he swore to protect and defend a Constitution that includes no First or Fourth Amendment.

Take that Dianne Feinstein! You may have accused John Brennan of violating Articles I, II, and III today. But Brennan’s still responding to me busting him for violating the First and Fourth Amendment.