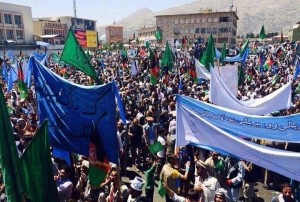 Last week, Abdullah Abdullah angrily withdrew his support of the runoff election process when he released audiotapes purported to be the voice of the head of the Independent Election Commission urging his staff to stuff ballot boxes. Although Afghanistan continues counting ballots and has announced that the July 2 scheduled date for releasing preliminary results will be met, Abdullah still has not rejoined the process. There is an argument between Abdullah and the Electoral Complaints Commission on whether he has actually submitted a formal complaint regarding the Zia-ul-Haq Amarkhail audiotapes. Abdullah’s response is to say that since the ECC won’t act, he is now submitting the material directly to the Attorney General.

Afghan presidential candidate Abdullah Abdullah’s electoral campaign team released an audio tape of Maidan Wardak provincial governor on Thursday, in which the governor persuades an unknown “army officer” not to prevent ballot-stuffing in the June 14 runoff.

Governor Attaullah Khogyani of Maidan Wardak, a province at the south-west of Kabul, speaks on the phone with the officer who asks the governor whether his unit should prevent electoral fraud in a district, according to the tape released in a live press conference.

The governor tells the army officer that fraud prevention was not a task for the security forces and encourages him to speak to a Member of Parliament, Kalimzai Wardak, a supporter of Abdullah’s rival, Ashraf Ghani Ahmadzai.

The footage which was also released on Thursday shows men in a room in the eastern Paktika province, as Abdullah’s team said, stuffing the ballot boxes for Mr Ahmadzai. The stuffed boxes were confiscated by the security forces, said Mr Shilgari.

Today, thousands of supporters took to the streets of Kabul with Abdullah to protest ballot stuffing. From ToloNews, we learn that although Hamid Karzai is accused of being one of the leading perpetrators of fraud on behalf of Ghani, one of Karzai’s brothers, whom they list as one of Abdullah’s running mates, took part in the demonstration:

Thousands of protesters have taken to the streets of Kabul City on Friday marching alongside Abdullah Abdullah in protest of frauds that took place in the presidential runoff elections.

Several roads in Kabul have been blocked as the demonstrators advance toward the Presidential Palace calling on the government to invalidate the rigged votes.

Thus far, there have been no reports of security threats. The demonstration is continued peacefully.

We learn from Khaama Press that there were angry slogans about Hamid Karzai and that posters of him were destroyed.  But it is in the Wall Street Journal where we learn what those angry slogans were:

Demonstrators shouting “Death to Ashraf Ghani” and “Death to Karzai” marched past government buildings and the gate to the presidential palace. Mr. Abdullah, riding atop a truck, greeted supporters chanting their support.

I wonder how Mahmoud Karzai felt about those “Death to Karzai” chants.

Recall that in the first round of the election, Abdullah fell just short of the 50% threshold needed to win outright, getting 45% of the votes, while Ghani was significantly behind him at 31.6%. But from Reuters, we see that Ghani’s team is expressing confidence that Tuesday’s vote announcement will have him leading by well over a million votes:

A member of the Ghani team, former candidate Daud Sultanzoy, said on Friday that based on information from election observers it predicted a lead of about 1.2 to 1.3 million votes over Abdullah.

“We are not claiming anything as we respect the election commission and will wait for its official announcement of the winner,” he said. “However, we know we are comfortably ahead.”

This is indeed a fragile time for Afghanistan. The Abdullah-Ghani split is largely along ethnic lines, with Ghani supported by the Pashtun majority and Abdullah by the second largest group, the Tajiks. But the Reuters article points to another risk the standoff presents:

“We want the mujahideen back. We don’t want technocrats and slaves of Jews and Christians,” said Badam Gul, a former mujahid.

“We want justice at any cost. There’s fraud and that is unacceptable for us. We will fight for our right until the last drop of blood in our body.”

Wednesday is shaping up to be a very important day as Afghanistan faces a highly uncertain future.