It May Not Have Been ISIS, But McCain Did Pose With Members of a Group That Beheads Opponents 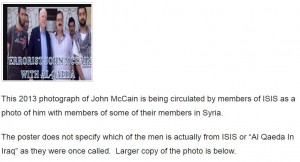 Even though CBS noted that Paul’s accusation had already been refuted before they quoted it, Josh Rogin felt it necessary to give more detail debunking Paul. Leaving aside the red herring of Nour and whether he was at the meeting, this part of Rogin’s piece is very interesting:

“Nobody self-identified as Nour, and none of the guys who were standing outside were in the meeting with McCain,” said Mouaz Moustafa, executive director of the Syrian Emergency Task Force, an American nonprofit that helped organize the McCain trip. Moustafa is in the picture and was also inside McCain’s meeting with the rebel commanders, along with Task Force political director Elizabeth O’Bagy.

A photo from inside the meeting posted on O’Bagy’s Twitter page confirms that the man alleged to be Nour was not in the McCain meeting.

Don’t bother trying to click on the link to O’Bagy’s tweet, because her account has been deleted.  She presumably deleted it around the time she was fired from the Kagans’ Institute for the Study of War because she didn’t have the PhD that she had previously claimed. Oh, and in her famous Wall Street Journal op-ed, she failed to disclose her key association with the Syrian Emergency Task Force, although the Journal has now added that nugget as a “clarification”.

More recently, in June of this year, a similar photo to the one linked above from Politico began circulating with the accusation that ISIS was promoting it because it showed McCain appearing with one or more ISIS fighters. The earliest such accusation I can find is from Weasel Zippers on June 19. I haven’t found any links to any actual claims from ISIS. This accusation snowballed, with the group Vote Vets even using it in a fundraising email. Josh Rogin must have been busy, so this time McCain relied on a local group to lead the pushback against the photo.

The extra person who appears in this photo but not the one from Politico is Salim Idriss, who was at the time the leader of the Free Syrian Army. In addition to Moustafa, the AzCentral quotes McCain as saying that one other person in the photo is “one of the brigade commanders for the Free Syrian Army”.

So let’s just take McCain and his defenders at his word and say that everyone in the photos with McCain (and at the meetings he held) was affiliated with the Free Syrian Army. They’re the moderates, right? Well, aside from that one incident I wrote about where one guy from the FSA filmed himself eating the heart of one of his victims and posted it online. After all, they say he was kicked out of the FSA.

Uh oh. Just this week, the New York Times said this in their story about the death of US citizen Douglas McAuthor McCain (really, that name seems chosen by The Onion or Duffel Blog to troll the right wing…) as a fighter for ISIS:

The rebels who killed him were fighting for the Free Syrian Army, a rival group backed by the United States, and they went on to behead six ISIS fighters — but not Mr. McCain — and then posted the photographs on Facebook.

Think about that the next time McCain and his war hawk cronies urge us to arm the FSA and/or bomb Syria because ISIS is a horrible group that beheads people.