Why Is Trump in a Joint Defense Agreement with Manafort If Rudy Concedes Manafort May Have “Colluded”? 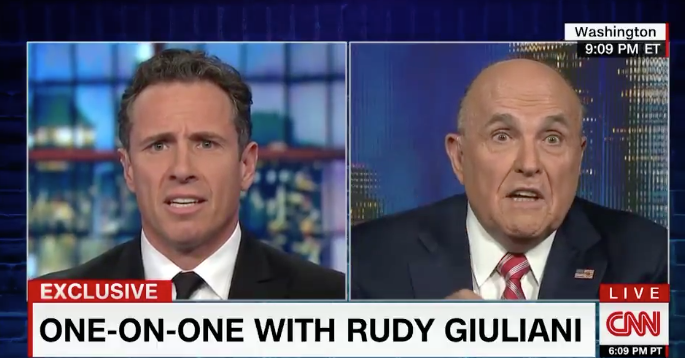 Rudy Giuliani had yet another of his limited hangout meltdowns on CNN last night. (This thread has the best summary I’ve seen until CNN posts a transcript.) In it, Rudy significantly moved his previous goalposts on “collusion,” by claiming that he had never said no one on the campaign had “colluded,” he had only made such claims about the President.

Rudy: I never said there was no collusion between the campaign or between people in the campaign. I have no idea —

Cuomo: Yes you have.

Cuomo: The guy running his campaign was working on an issue at the same time as the convention.

Cuomo: He actually did say that, Rudy — as far as I know.

Rudy: Well I didn’t say that. Well, as far as he knows that’s true!

In this clip, Rudy even says, “I have no idea — never have — what other people were doing.”

Except he did — or claimed he did. Rudy has claimed over and over again that he’s sure the President is not at any risk of being charged with “collusion” because he knows what all of the critical witnesses — who are all in a Joint Defense Agreement with the President — told Mueller.

That’s actually not true. Rick Gates was reportedly never part of a JDA. Mike Flynn famously pulled out of it to turn state’s evidence. Don McGahn apparently didn’t share all the details of his 30 hours of interviews with Mueller’s team.

But it is true with respect to one person: Paul Manafort. Hell, even after Manafort flipped, his lawyer continued to brief Rudy about what was said and Rudy based certain defense strategy decisions — most notably whether and how to answer Mueller’s questionnaire for the President — on what he heard from Manafort’s lawyer Kevin Downing.

Rudy says he never learned that Manafort had shared campaign polling data with Konstantin Kilimnik until Manafort’s lawyers “accidentally” failed to redact that detail a few weeks ago (in fact, Rudy hilariously blames that revelation on a leak). Yet he was getting briefed on what Manafort was saying — he was in a Joint Defense Agreement!! — during the entire period when Manafort was lying about sharing polling data with Kilimnik.

Rudy insists that, even if Manafort “colluded,” the President did not. And yet, the President was in — remains in, as far as we know — a Joint Defense Agreement with this guy that Rudy now concedes may have “colluded” during the election.

William Barr’s Asymmetric Confusion about Shitty Mueller Reporting How to Talk about Impeachment: Preventing Harm to the Country