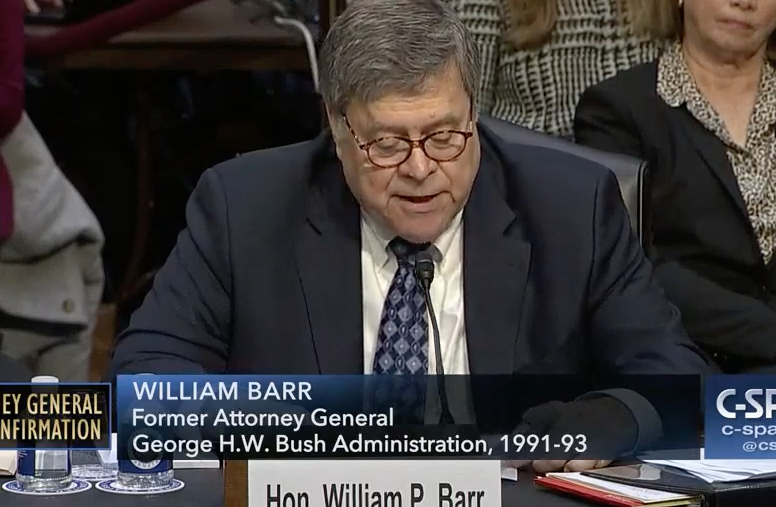 In two of my posts on Barr’s memo about the Mueller investigation (one, two), I note that Barr’s project consists of writing up 19 pages on a subject that start with an admission he knows nothing about the subject.

Barr also adopts the logically and ethically problematic stance of assuming, in a memo that states, “I realize I am in the dark about many facts” in the second sentence, that he knows what Mueller is up to, repeating over and over claims about what theory of obstruction he knows Mueller is pursuing.

Both in his prepared statement yesterday and in his testimony, he excused his memo by blaming his badly mistaken understanding of what Mueller was doing on media reports.

[M]y memo was narrow in scope, explaining my thinking on a specific obstruction-of-justice theory under a single statute that I thought, based on media reports, the Special Counsel might be considering.

He’s not wrong! I have long bitched about shitty Mueller reporting that suggested Mueller was primarily investigating whether Trump obstructed justice. Such problems persist even in recent reports that the counterintelligence focus on Trump was any different from the obstruction inquiry.

The investigation the F.B.I. opened into Mr. Trump also had a criminal aspect, which has long been publicly known: whether his firing of Mr. Comey constituted obstruction of justice.

That has, in turn, led to claims that the counterintelligence concerns stemmed exclusively from the firing of Jim Comey and not a slew of other behaviors going back some time before that. 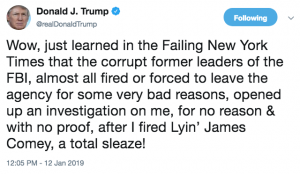 So Barr might be excused for totally misunderstanding what the public evidence from the Mueller investigation actually showed (though not his willingness to comment without first learning what the evidence actually was), because most mainstream media reports badly misreported the public record.

Curiously, Barr didn’t get snookered by the other topic that is consistently badly reported (and badly reportedly, most likely, for the same reason — because Trump’s team has seeded that shitty reporting): whether and how Mueller will issue a report. A great deal of yesterday’s testimony pertained to whether Barr will release “the Mueller report.” Barr promised, in his his prepared testimony and later, to release as much of the results of the investigation as he could.

I also believe it is very important that the public and Congress be informed of the results of the Special Counsel’s work. For that reason, my goal will be to provide as much transparency as I can consistent with the law.

But both Democratic and Republican Senators were concerned by that (which is itself a testament to wildly divergent understandings of what Mueller is looking at), with John Kennedy going so far as suggesting Barr should release all the grand jury materials and Dianne Feinstein conditioning her vote on whether Barr commits to make Mueller’s report public.

In fact, Barr did two things. First, he said he’d speak to Rod Rosenstein and Mueller to understand what their current plans for a report were. But he also repeatedly cited the regulations to argue that Mueller’s report is — by regulation — confidential.

For shits and giggles and because I knew what response I’d get, I asked Mueller’s spokesperson Peter Carr what form their report will take today. I wasn’t disappointed. His response was to attach their governing regulations and call attention to the language that describes the mandated Special Counsel Report.

Thanks for reaching out. All I can point you to is the regulations that govern our office, which are attached. Section 600.8 states the following:

(c) Closing documentation. At the conclusion of the Special Counsel’s work, he or she shall provide the Attorney General with a confidential report explaining the prosecution or declination decisions reached by the Special Counsel. [my emphasis]

That is, if you ask Mueller — or the closest thing we get, his spokesperson — he will answer precisely what Barr did: that his mandated report is simply a confidential prosecutions and declinations report.

That shouldn’t be surprising, either. Mueller continues to use pseudonyms for identities of people in his filings — like Donald Trump himself — that are readily identifiable, based on the principle that DOJ doesn’t refer to uncharged individuals. It’s a principle that explains part of why Mueller submitted yesterday’s Manafort filing in heavily redacted form.

[T]he redactions relate to ongoing law enforcement investigations or uncharged individuals, and public disclosure of certain information in the submission could unduly risk harming those efforts.

In other words, virtually all of the coverage of the “Mueller report” has promised it will be something other than we had reason to believe — short of an indictment request overridden by the Attorney General — that it would be.

By the same token, there’s abundant reason to believe that that’s not what the “Mueller report” will be.

Yesterday, the same day questions about a Mueller report were central to Barr’s confirmation hearing, the WSJ reported this entirely unsurprising detail about Michael Cohen’s testimony before the Oversight Committee on February 7.

Mr. Cohen, who is scheduled to speak in an open hearing on Capitol Hill for the first time Feb. 7, won’t be able to talk about topics that he has discussed with special counsel Robert Mueller, according to a person close to Mr. Cohen.

The indication that Cohen’s testimony will be sharply limited (presumably based on the intercession of Mueller’s congressional liaison, Stephen Kelly, about whom we’re likely to hear more in coming days) suggests several things: First, Mueller doesn’t expect to be done with Michael Cohen by February 7. That, in turn, suggests that all the claims — which I’ve heard too — that Mueller will soon issue a “report” likely misunderstand what form that report will take, because a one-time report covering the importance of Trump Tower deals to entice Trump’s family would present little reason to silence Cohen next month, particularly because he’d be free to talk about it anyway. But if something more public — such as an indictment, even if it’s just of Trump Organization — or if a non-public report that can be conveyed to the House Judiciary Committee is in the works, then you’d want to silence Cohen. Indeed, contrary to a lot of other bad reporting, Cohen remains on the hook in his cooperation with Mueller; he won’t get a reduction in sentence until they decide he has done enough to get a year lopped off his existing sentence.

I have my concerns about Barr, especially his willingness to make policy decisions informed only by right wing propaganda (on which point he was worse on his testimony about immigration and criminal justice issues than on Mueller). Those concerns extend to what will happen if Barr gets to decide what parts of a Mueller report gets made public; it’s clear that Barr currently believes that Mueller will issue a report finding that Trump did nothing criminal. Those concerns are heightened by the fact that on virtually every other topic, Barr had not done enough homework to answer basic questions (the most remarkable instance of which was his confession that he hasn’t read the Supreme Court’s decision in Carpenter), but he was prepared to state, correctly, that Mueller’s report will be confidential, addressed solely to him.

I have other concerns. Once CSPAN fixes their transcript, I hope to show how badly hypocritical Barr is about both Matt Whitaker and Donald Trump’s sleazy influence peddling. His comments about recusal from the Mueller investigation were troubling. And he seems to believe — as he explained to Patrick Leahy near the end of the hearing — that in November 2017 there remained, after DOJ had investigated both and after Mueller had rolled out the George Papadopoulos plea deal showing him trying to hide that he was discussing emails and meetings with Putin in the days after he became a foreign policy advisor to Trump, more evidence to support an investigation of the Uranium One and Clinton Foundation allegations than into “collusion.”

But Barr also strongly suggested he would not step in the way of any Mueller indictments. And Senators did get him on the record agreeing that if Trump suborned perjury it would be criminal. And he respects Mueller, so if Mueller shows him evidence that Trump has been gravely compromised, then he should take that evidence seriously.

Barr appears to be an arrogant man who believes right wing propaganda is sufficient evidence to base policy decisions on.

But he also has a better idea of what the regulations say to expect from a Mueller report — as distinct from Mueller indictments — than the Senators questioning him did.

Update: This useful JustSecurity piece lays out the regulations and the Attorney General’s discretion.

Manafort Was Pursuing a Ukrainian “Peace” Deal Well After He Was... Why Is Trump in a Joint Defense Agreement with Manafort If Rudy Concedes Manafort...