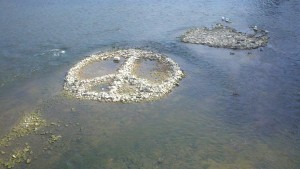 Apparently, the ducks that live in the Grand River think we should “Give peace a chance.” McCaffrey the MilleniaLab and I saw this on our walk this morning.

All my complaints that DOJ won’t indict banksters? Well, they won’t indict American banksters. They did, however, indict a handfull of Credit Suisse banksters last week for helping Americans shield their loot from taxes.

Victory for Joe Nocera! Apparently DOJ has now revealed it is investigating Wells Fargo for the criminal discrimination alleged in the Fed settlement it signed last week. Note, however, that all this appears to be headed for yet another settlement; can we please have a criminal prosecution, DOJ?

Both Jason’s story on the Air Force using the New Testament and the comments of Wernher Von Braun to teach missile officers the ethics of nuclear war, and Spencer’s story on the FBI using Orientalist trash to teach agents on Islamic culture are nauseating by themselves. But read together, they say our national security establishment propagates the ideology of Crusade in our fight against terrorism. Here’s the Air Force and the FBI PowerPoints used to spew such propaganda; it’s nice to see we’ve got our propaganda bureaucratized on PowerPoint.

Claiming (falsely) that there’s no evidence that Anders Behring Breivik is linked to U.S. groups, Peter King has refused Democratic requests that he expand his terror hearings to include the far right. Of course, given that the US rightwinger inspired Breivik, rather than the reverse, this is consistent with King’s earlier support for US-sponsored terrorism in Ireland. I guess for King, terrorism is okay so long as the US exports it.

The CIA says the Russians bombed our embassy in Georgia last September. Congress wants to suggest that means Russia can’t be trusted with a defense agreement. I don’t remember them saying that when we bombed the Chinese embassy in Serbia.

In a post deservedly taking a victory lap for his case that the secret PATRIOT powers relate to geolocation, Julian Sanchez notes a change in Ron Wyden’s legislation designed to limit the government’s use of geolocation. Whereas it used to modify FISA, it now includes an exception to permit geolocation. It seems–though this is just a guess–that the bill is now trying to force the government to use a higher standard before using geolocation.

As part of its effort to raise attention to DOJ’s new investigative guidelines, the Brennan Center has fact checked the claims DOJ officials made before the last round of DIOG changes, finding that they misled what those changes would entail as they were trying to gain support for them.

NSA made a big deal out of declassifying a 200-year old document on cryptography. Only, the document was never classified, and has been available in digital format for several years.

It looks like DOJ is using its relaxed approach to Miranda with white alleged terrorists, too, in this case with the accused MLK Day bomber. They’re just lucky this isn’t going to endanger their prosecution here. (h/t scribe)

Shorter Stephen Roach: By using the myth of bond vigilantes to create an unnecessary debt ceiling crisis, we have pushed China to become bond vigilantes.