The Other Auto Bailout: Ford, Toyota, … and Harley Davidson? 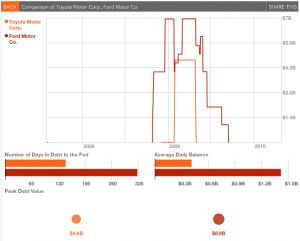 As I noted yesterday, Bloomberg has made some really cool visual tools showing the lending the Fed did over the years.

So I wanted to use it to show the other auto bailout: lending to Ford and Toyota at a time when the auto market was fragile and credit was scarce.

Showing them side-by-side makes it clear that at the same time the government was discounting GM and Chrysler’s claim that unavailability of credit was a big part of their woes (and making them beg harder to get credit from the government), the Fed was providing credit to both Ford and Toyota.

Though you need to go further to see why the companies were taking the loans. The Ford image shows that it took the loans at a time when its market capitalization was in the toilet (remember its stock mirrored that of GM, and ostensibly to help GM out Ford participated in the testimony to Congress).So at the peak (and also around the time Chrysler was going into bankruptcy) the loans were worth almost 175% of Ford’s market value. 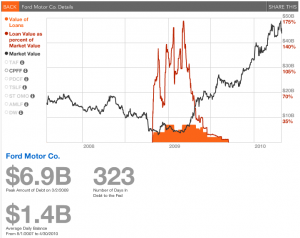 Note these loans were to Ford Credit: most likely, this reflects Ford relying on government loans to extend credit to its dealers to keep product moving.

Toyota’s loans, however, represented a much smaller percentage of its market value (which never fell as much as the others) and were significantly smaller than the loans Ford took out. But the loans also came during the period when Chrysler and GM were under the greatest stress. 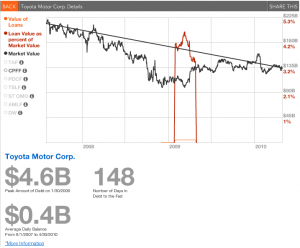 Not surprisingly, Toyota paid off these loans more quickly than Ford did, in 148 days as compared to 323.

Ford and Toyota weren’t the only auto industry companies getting loans. BMW also had over $4B in loans, at times up to 27% of its value. There’s a $1.7B loan to Chrysler Financial (AKA Cerberus).

Perhaps the biggest surprise of all of this are Harley-Davidson’s $1.3B loans, at times over half its market value. 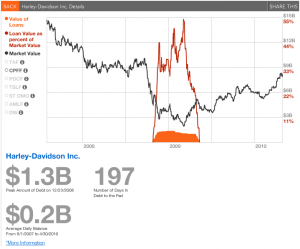 Now, I’m no expert on the motorcycle business. But like the auto business, it depends on moving product (both vehicles and parts) to independently operated dealers, which in turn rely on credit. So like the auto industry, the credit crunch resulting from the crash must have devastated it.

Add in the fact that, like GM, H-D ended up restructuring. It was also revamping its manufacture; it was also restructuring its labor agreements. It also had had profit woes which hit its stock price. Which made fall 2008 a shitty time to lose access to credit.

But unlike GM, it got Fed lending, which appears to have helped it weather the crisis.

Now, don’t get me wrong. In the long run, GM will be far better off having gone through its restructuring. But there was a time in 2008 when the folks in DC refused to believe that the auto business’ woes were, in significant part, credit-driven.

But it appears the Fed was well aware of that fact.