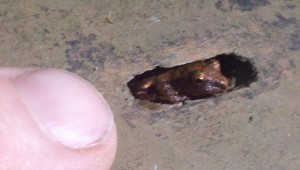 Mr. EW took this picture this weekend of a teeny frog living in a hole in a picnic table (that’s his index finger in the picture, giving you a sense of how small this fella was).

While he doesn’t use the word “lie” (he lists “reasons to doubt Cheney’s version” and says it’s difficult to see how his claims could be true), Barton Gellman catches Cheney in one he told about his illegal wiretap program. I think there are a few more reasons to support the case Cheney is lying here (which I’ll lay out once I’ve read the book).

The AP confirms what appeared likely when Der Spiegel and David Ignatius first reported that a close associate of Mullah Omar, Tayyab Aga, had been brokering a peace deal: Hamid Karzai leaked news of the peace discussions to ensure he remained a part of any peace discussions.

The CIA is redacting chunks of publicly known details about their interrogation practices from Ali Soufan’s book. They’re not just doing this with Soufan’s book: his testimony to the 9/11 Commission has been pending release at the National Archives since I did some work there in spring 2009.

Jonathan Hafetz has a post summarizing the various Bivens suits suing the government for torture (we’ve talked about most of these–Vance, the two Padilla suits, and Doe v. Rumsfeld–here). It helps to explain why one of all of these is likely to be heard by SCOTUS.

CAP has done an excellent report on the systematic attempt to get Americans to fear creeping sharia law and other Muslim culture. It describes the funders, the “scholars,” and the press that has fostered Islamophobia in this country. I hope to write more on the report, but until then, read it for yourself.

It turns out Wobbly songwriter Joe Hill was shot by a rival for his sweetheart’s attention and not the son of the grocer he was wrongly executed for killing.

The people lobbying to delist MEK from the State Department’s list of terrorist organizations are being paid big money to do so. Add Patrick Kennedy to that list of people.

I joked last week that if Apple didn’t take over this country, then people might turn to churches, neighborhoods, and small businesses as they grow increasingly disgusted with government. But Gallup also shows that people like the computer industry a whole lot. I was most interested in how well food companies–the restaurant, farming, and grocery industries did in this Gallup poll.

Washington Monthly has developed its own set of college and university rankings to measure how institutes of higher learning are serving society. They’ve done so to drive better higher ed decisions. While Berea College (unsurprisingly and deservedly) leads the list, I’m proud to say both my alma maters–Amherst and University of Michigan–are in the top 10 in their respective categories.