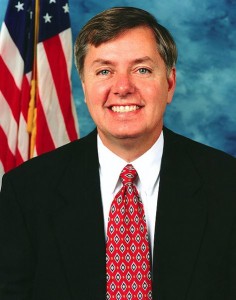 In the latest developments in the US-Pakistan war of words, the Pakistani Prime Minister said the US must stop blaming Pakistan, Senator Lindsey Graham (R-SC) suggested the US should start using bombers in the region held by the Haqqani network and the Chaman crossing, one of two major border crossings into Afghanistan used as US supply routes, has been closedafter a bomb detonated, killing a disposal expert.

In remarks broadcast on television less than an hour ago as of this writing, Pakistan’s Prime Minister Yusuf Raza Gilani warned the United States to stop blaming Pakistan for regional instability:

Gilani’s remarks were prompted in part by Lindsey Graham raising his anti-Pakistan rhetoric yet another level. From the same Reuters article:

Graham said in an interview with Reuters that U.S. lawmakers might support military options beyond drone strikes that have been going on for years inside Pakistani territory.

Those options may include using U.S. bomber planes within Pakistan. The South Carolina Republican said he did not advocate sending U.S. ground troops into Pakistan.

“I would say when it comes to defending American troops, you don’t want to limit yourself,” Graham said. “This is not a boots-on-the-ground engagement — I’m not talking about that, but we have a lot of assets beyond drones.”

Almost exactly a year ago, on September 30, 2010, the Torkham Crossing from Pakistan into Afghanistan was closed in retaliation for the US killing three Pakistani soldiers in a botched cross-border operation. The closing of this key supply route was a major move, and a number of fuel tankers subsequently were burned as they were idled in various locations around Pakistan. Today, we learn that the Chaman Crossing was closed a couple of hours ago in response to a bomb disposal expert being killed when the bomb he was attempting to disarm detonated:

Pakistani authorities have closed one of the two border crossings used by trucks carrying NATO war supplies into Afghanistan after a bomb hit an oil tanker.

Police officer Mohammad Tayab was quoted as saying by media reports that the Chaman border crossing was closed “for security reasons” after an explosion on Thursday killed a bomb disposal expert who was trying to defuse the device.

It has not been announced how long the crossing will remain closed, but I would not be surprised if the investigation into the bombing of the tanker will be cited as a reason for keeping the crossing closed for several days. Should that happen, a key development to watch for will be whether additional tankers caught in the back-up will be attacked. In last year’s closure of the Torkham Crossing, there were suggestions that the number of tankers attacked could only be explained if one assumed that Pakistan reduced the level of security being provided for transport convoys. Will the same thing happen again this year?