Project BACUS Facility at Dugway Has Both Fermentation and Weaponization Capabilities 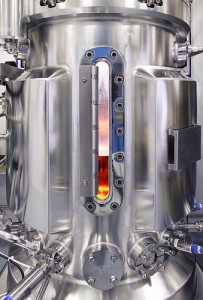 A fermenter about twice the size of the one at the BACUS facility. (Novartis AG photo under Creative Commons license)

CNN informs us this morning that a report card issued by the bipartisan WMD Terrorism Research Center, headed by former Senators Bob Graham and Jim Talent, has issued failing grades to the US in its Bio-Response Report Card (pdf).  The primary news from the report card, according to CNN, is that “The United States remains largely unprepared for a large-scale bioterrorism attack or deadly disease outbreak”.  The grades:

The report card gave 15 F’s,15 D’s and no A’s in its assessment of current bio-defense capabilities in the United States.

As I was reading the report, however, one short passage jumped out at me since I have been concentrating recently on the anthrax attacks of 2001.  As noted in this diary, I was aware of Judy Miller’s reporting from September 4, 2001 on Project BACUS, which involved the construction and operation of a small facility capable of producing bioweapons:

In a nondescript mustard-colored building that was once a military recreation hall and barbershop, the Pentagon has built a germ factory that could make enough lethal microbes to wipe out entire cities.

Adjacent to the pool tables, the shuffleboard and the bar stands a gleaming stainless steel cylinder, the 50-liter (53-quart) fermenter in which germs can be cultivated.

The apparatus, which includes a latticework of pipes and other equipment, was made entirely with commercially available components bought from hardware stores and other suppliers for about $1 million — a pittance for a weapon that could deliver death on such a large scale.

Miller goes on to claim in this article that this facility “never made anthrax or any other lethal pathogen”.  Instead, she cites two production runs of biopesticides in 1999 and 2000.

The BACUS facility turns up in the WMD Terrorism Research Center’s Report Card.  In this case, the source cited is not the New York Times article I cite above, but Miller’s 2001 book, Germs: Biological Weapons and America’s Secret War:

The first piece of hard evidence regarding the capability of non-state actors to produce sophisticated biological weapons came in 1999 from a Defense Threat Reduction Agency study called Biotechnology Activity Characterization by Unconventional Signature (BACUS). The initial purpose of the study was to determine if a small-scale bioweapons production facility would produce an observable “intelligence signature.”

The answer was no. The study concluded that even when using “national technical means,” it would be extremely difficult, if not impossible, for the intelligence community to detect a clandestine production facility. This conclusion was somewhat expected. The surprise, however, came from an experiment conducted as part of the study. Individuals, with no background in the development and production of bioweapons and no access to the classified information from the former U.S. bioweapons program, were able to produce a significant quantity of high-quality weaponized Bacillus globigii—a close cousin to the well-known threat, Anthrax.

From the New York Times article, I had viewed the BACUS site as solely a fermentation site. This disclosure that the facility also is equipped to weaponize the material produced makes it even more likely that this site, or one very similar to it, could have served as the real source of the material used in the 2001 anthrax attacks.

The second important disclosure in this short passage from the report is that it was possible for people “with no background in the development and production of bioweapons” or access to US bioweapons technology could use this facility to produce “a significant quantity of high-quality weaponized” anthrax simulant.

So, now that we know that the BACUS facility was fully operational at the time of the anthrax attacks, that it could produce and weaponize spores and that it could be successfully operated by individuals without bioweapons expertise, how is it that the entire staff of the Dugway site, where the BACUS facility is located, was eliminated in the Amerithrax investigation? McClatchy reporter Greg Gordon shed some light on that topic yesterday in a live chat put on in coordination with the recent McClatchy/ProPublica/Frontline documentary on the Amerithrax investigation:

At Dugway, which unlike USAMRIID did make anthrax powder, the FBI examined who was present at work and during what hours on the days before the anthrax was postmarked. The bureau concluded that none of Dugway’s researchers could have flown to New Jersey and back during their windows of opportunity

It is clear from this description that the FBI prejudiced the investigation of Dugway personnel by looking only for “lone wolf” actors rather than allowing for the possibility of multiple personnel acting in concert to perpetrate the attacks. Even for a facility as small as BACUS, such an assumption becomes almost ludicrous on its face. I have experience with fermentation equipment such as the 50 liter fermenter installed at BACUS, and it is quite a stretch of the imagination that a single person could prepare the starter culture, prepare and sterilize the fermentation medium, monitor the 18-24 hour fermentation run, harvest and process the spores and then dry and weaponize them without help from another person. In this regard, note that the Report Card quote above implies that it was a team, rather than a single person, who carried out the demonstration run described. The team would not need to be huge, but at least two to three people working together would be my estimate of what it would take to successfully carry out the steps outlined above.

Did the FBI examine records of fermenter use at Dugway in the months preceding the attacks? Did they investigate whether the BACUS facility had been in use? Did they look for evidence of material being shipped from Dugway to a recipient on the East Coast who could have dropped the letters in the Princeton mailbox?

The combination of the full functionality of the BACUS facility, coupled with the description of the weak criteria on which Dugway personnel were eliminated as suspects in the Amerithrax investigation demands further attention from the FBI. But don’t hold your breath waiting for that to happen.