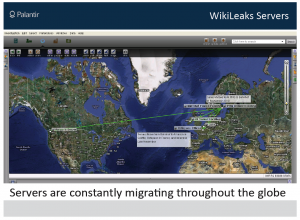 At least according to this short piece, the US and Europe are holding a war game today to “simulat[e] how they would in future stop a Wikileaks-type hack.”

I find this to be a really troublesome development. After all, the way to stop a “Wikileaks-type hack” is for DOD, by itself, to implement some very basic security measures on their networks. You know? Like preventing soldiers from inserting writable disks with a Lady Gaga label into SIPRNET-linked computers?

Granted, they have resisted such basic security measures for years, even in the face of two viruses and the WikiLeaks leak. But they don’t need the EU’s help to implement very basic security fixes.

Where they would need help from Europe, though, is in choking off a media outlet by denying it both funding and server space–something they tried to do with WikiLeaks, with only partial success. While they did succeed in choking off funding, they failed to prevent the publication of WikiLeaks generally.

Indeed, when DOJ was recommending Bank of America work with a private spying company to combat WikiLeaks, the plan was to go after WikiLeaks’ server in Sweden.

Need to get to the Swedish document submission server. Need to create doubt about their security and increase awareness that interaction with WikiLeaks will expose you.

Not only does this suggest DOD is still looking elsewhere to solve the problem created by their own abysmal network security.

But it also means the US and Europe are plotting out ways to shut down free speech in the future.