The Bloomie and Kelly Show … with Fake Video Props! 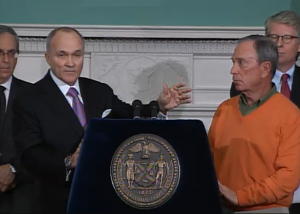 The person who intended to use the pipe bomb is a “lone wolf” al Qaeda sympathizer  named Jose Pimental who lives with his mother.

Authorities have been tracking Pimental since May 2009 and reports are an informant was involved, which might explain why he moved from strictly talking about violence to actually going to Home Depot to buy a few pipes and (as bmaz describes it) some Christmas lights to make his bomb.

Now, Bloomie and Kelly tried to make this look spectacular. They went to the effort of blowing up a car and videotaping it to show what the bomb could have done–though there’s no indication that his pipe bombs were ever operational. (No, no journalists asked who paid for the car the NYPD destroyed so they could have a nice video prop.)

They also made a nice model of Pimental’s bomb.

Kelly tried to suggest that Pimental aspired to hit the same targets that Occupy Wall Street protestors were targeting. “We remain the nation’s financial capital,” he said, suggesting that’s why Pimental targeted NY. Except that Pimental’s planned targets–like the post office in Washington Heights or soldiers returning from deployments–have nothing to do with the finance industry or even anything unique to NY.

None of Bloomie and Kelly’s efforts to put on a good show prevented the journalists present from asking, repeatedly, “Did the FBI decline to take this case?” Given the way Bloomie refused to look at the camera the third time a variant of the question was asked, I’m guessing the answer is “yes.” {Update: Ryan Reilly confirms that is in fact the case.]

And Pimental was, as Bloomie repeated, a “lone wolf.” Which means no amount of infiltrating mosques and Moroccan restaurants would have found him, because he had no associations that would have revealed him (unlike Najibullah Zazi, whom the NYPD missed, even though his Imam was one of their informants).

The big questions coming out of this presser–aside from who paid to blow up a car and why Bloomie wore an ugly orange sweater to a press conference–has to do with the timing. Kelly seemed to suggest the NYPD was orchestrating this somewhat when he said, “We had always intended to take him in custody before he detonated a bomb.” In addition, he said Pimental had decided to make a bomb back in August.

So why is it that their closely watched terrorist decided to actually build a bomb at the precise moment when Bloomie’s and Kelly’s heavy handed policing, including their abusive counterterrorism spying, have lost all credibility?

Update: Here’s the complaint. You’ll like how the Officer doesn’t mention they’ve been tracking this guy since May 2010, and instead says it all started in October 2010. You’ll also enjoy how Pimental handed the informant every bit of his bomb, as if he were playing a role.