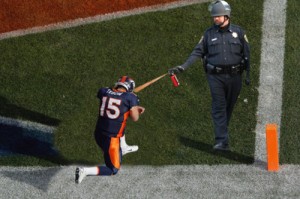 Okay, I am going out on a limb here and moving trash up in the queue until tonights game, and any afterbirth, is over. Then either Marcy or I will return it to the bottom of the barrel where it was rescued from! Mostly, I wanted to post up this wonderful Norman Rockwell image, because it represents the greatness that is America!
.
.
.
.
.
.
THE BCS sucks, but it has a literal monopoly on major college football. It operates with the blessing of the NCAA, yet serves as a giant restraint of trade upon NCAA member schools and to the virtual exclusion of those schools which are not fortunate enough to have already bought their way into the six “BCS Conferences”. The single premise justifying this infernal setup has been that the BCS formula results in a true national championship between the two truly top teams and the best lineup for the four “BCS Bowls”, the Rose, Fiesta, Sugar and Orange.

The lineups for the games have never been necessarily that great though and, although much of the time the championship game seems to have the right two teams, it has certainly been nowhere near consistent in that regard. Friday and Saturday night blew it all to shit. First, Oklahoma State, the number 2 BCS ranked team got got beat by a very mediocre Iowa State. Then number 3 Oregon got licked by Tommy Trojan and Oklahoma got the RGIII treatment from Baylor. BOOM! The BCS rankings are in shambles, the nation is looking at another putrid rematch of that pitiful 9-6 LSU/Alabama game from earlier in the year and no telling how crappy the four named bowls will end up. There is even growing talk that the weak sister of the poor, Notre Dame, should be given a BCS bowl berth; which, although providing absolutely shitty football, always is a moneymaker.

Please, make it all stop. Now. This is the one place where I would be happy to have the idiots in the US Congress intervene. Go to it boys. End. This. Madness. Now!

Oh, hey, a shout out to Gulf Coast Pirate’s Houston Cougars, who ran up another big win against SMU to move to 11-0 for the year and will try to make it 12-0 with a season closing win over Tulsa. The Cougars deserve a nice BCS berth, they are exciting to watch. And, under protest, must also mention the confounded Wolvereenies, who actually looked competent on both sides of the ball in a big, really huge, win over Nebraska. This Brady Hoke may be the right guy in Ann Arbor, and residents/former residents there should thank the nice folks in San Diego!

On to more pleasant things where every team has the the option to play the games to win the games and take their chances in the playoffs. The NFL. Going to open the discussion with Cincinnati at Baltimore. The Bengals may not have won against the Stillers, but they sure held their own, as did rookie QB Andy Dalton. But they get another smash mouth perennial playoff division opponent today in the Ravens. Both teams are playing great defense and have competent, but far from flashy offenses. Like with the Stillers, look for the Ravens to win, but could really be a great game. Sheriff Ed Reed, meet Duelin Dalton. But in Duelin’s favor today, one cat he will not be meeting is Ray Ray Lewis, who, as Marcy commented, hasn’t missed a game in almost a Favre. But the Ravens still have Terrell Suggs and Reed, and that is a lot.

Bolts at Bears may well be the best game – potentially anyway – on the schedule this week. The Bears are clicking, the Bolts are hurting; but this is the time of year San Diego usually pours it on. Also interesting again is Carolina at Kitties. Can Cam shaft the Lions? Detroit has really fallen back to earth and one of the huge reasons has to be the nearly complete absence of a running game without Jahvid Best. Detroit should win this, but I dunno. The Iggies go visit the Gents in the “meh” game of the week, although I suppose Philly could open the door some for Dallas if they knock off Eli. Oh, and the ‘Boys are at the Skins where Sexy Rexy is baaaack. Grossman does give Washington the best chance to win (also best chance to implode), but hard to see that they have anything for Dallas at this point.

Oh, and the CheesePack tries to stay undefeated against the Buccos. Go Pack Go!! Don’t you just love the Little Jets Whiner?!

Well, there is a lot to discuss even though this is a football only Trash week, so get to jawing.