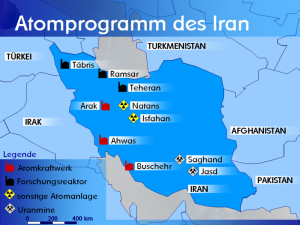 According to Haaertz, the Iranian Fars News Agency is reporting (although I don’t see a story yet at their website or at Mehr News) an explosion in Isfahan, where an Iranian uranium processing facility is located:

A explosion rocked the western Iranian city of Isfahan on Monday, the semi-official Fars news agency reported, adding that the blast was heard in several parts of the city.

It should be noted that Iran operates a uranium conversion plant near Isfahan, one with an important function in the chain of Iran’s nuclear program.

It first went into operation in 2004, taking uranium from mines and producing uranium fluoride gas, which then feeds the centrifuges that enrich the uranium.

The underground centrifuge facility at nearby Natanz was previously attacked by the Stuxnet virus and is seen as perhaps the most important Iranian enrichment facility.

When today’s explosion and the recent death of Hassan Moqaddam, the head of Iran’s missile program, in an explosion of dubious origin while hawks nattered on about the IAEA Iran report, are coupled with the Stuxnet attack, it appears that the Iranian nuclear program is being attacked simultaneously at all points along the path that could lead to a weapon on a missile.

Was today’s explosion an escalation of that battle?