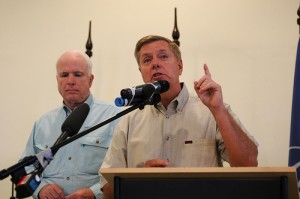 Pakistan is pulling out troops from two of the three border coordination units at the Pak-Afghan border set-up for communication between Nato and Pakistani troops in retaliation to the Nato November 26 attack, said a report by the The Associated Press.

The report quoted US officials on the condition of anonymity saying that the move will be a set-back for Nato troops in Afghanistan as they will remain more cautious during attacks on militants in fear of making another mistake.

This is a very important move because of the importance of these posts in recent events. As the Express Tribune points out in the same article, one of these posts plays a key role in the disputed November 26 events:

British newspaper The Telegraph reported earlier this month that it was the ‘error’ of the Nato troops that led to the attack which killed 24 Pakistani soldiers at a checkpost in Mohmand Agency. It quoted a Pakistani officer as saying that the information given to the Pakistani border coordination unit prior to the attack was incorrect.

Furthermore, it appears that one of these posts functioned as designed in preventing another tragedy on November 30, as an episode of cross-border artillery fire was quickly ended before any loss of life:

In the latest border incident, General Jacobson said it was reassuring that normal channels of cooperation and communication had been opened to resolve the issue.

“We haven’t got the details yet but the most important thing is the normal methods of cooperation worked and there were no casualties, no damage despite heavy firing,” he said.

The AP story on Pakistan’s move, as carried by the Washington Post, says that the removal of Pakistani troops from the coordination centers is expected to be temporary:

The troops were pulled back for “consultation” on how to improve coordination with NATO and should be back at their posts within the next few days, said Pakistan army spokesman Maj. Gen. Athar Abbas. He did not specify the number of troops who would be recalled, but said some would remain at the border centers.

In addition, Pakistan’s military has opted out of planned meetings with the US:

Members of the Ministry of Defence and the armed forces have cancelled all their trips, scheduled or otherwise, to US and NATO member countries following the NATO air strike that killed 24 Pakistani soldiers a week ago.

Director General Joint Staff Headquarters, Lt. General Muhammad Asif was due to lead a 15 man delegation to America on a scheduled trip. A source close to the Lt. General said that the group was due to depart for the trip in the first week of December. However, following the NATO air strike, the trip has been cancelled.

Meanwhile, the Bonn conference on the future of Afghanistan took place yesterday despite Pakistan boycotting it (and with the ironic attendance of Iran).  Afghan President Hamid Karzai today stated yet again that Pakistan will be key to bringing the Taliban to any peace negotiations with Afghanistan:

“Pakistan’s role in any negotiations with the Taliban is very important and that is what we are seeking,” he told a joint news conference with German Chancellor Angela Merkel.

“Pakistan unfortunately suffers from the presence of sanctuaries (for Taliban insurgents) there and unless we address the sanctuaries and work together towards a comprehensive understanding of our problems and the eradication of radicalism we will neither see peace in Afghanistan nor peace and stability in Pakistan,” he added.

With US-Pakistan relations poised on the precipice, what could be better than another blustering statement from those towering statesmen of the war party, John McCain and Lindsey Graham?  Here is their statement, in all of its war-mongering beauty:

“We fully appreciate the importance of U.S. relations with Pakistan, which we believe can serve U.S. national security interests. The cross-border air action that killed 24 Pakistani soldiers was unfortunate and unintentional, and we are confident that the investigation being conducted by NATO and the U.S. military will clarify the circumstances of this terrible tragedy. We join the President and our colleagues in once again expressing our deep condolences to those who lost loved ones.

“The Pakistani government’s response to these events, however, has been deeply troubling and has added to the continued deterioration of our relationship. In recent days, the government has prevented NATO supplies from entering Afghanistan through Pakistan. It has ordered U.S. intelligence officers to leave the country and disrupted their work on important national security matters. And it has boycotted an international conference in Bonn, Germany that supports peace in Afghanistan.

“If these actions were not concerning enough, there were reports just this morning that the Pakistani government has allegedly decided to suspend all bilateral agreements related to counterterrorism, as part of a broader review of Pakistan’s political, diplomatic, and military relations with the United States. Such steps by the Pakistani government would mark a new low for our relationship.

“The United States has been incredibly patient with Pakistan. And we have been so despite certain undeniable and deeply disturbing facts. Most importantly, Pakistani army and intelligence officials continue to support the Haqqani Network and other terrorist groups in Pakistan that are killing U.S. troops in Afghanistan, and the vast majority of the material used to make improvised explosive devices used against U.S. forces in Afghanistan originates from two fertilizer factories inside Pakistan.

“The time has come for the United States to fully review its relations with Pakistan. We must assess the nature and levels of our support for Pakistan. In particular, all options regarding U.S. security and economic assistance to Pakistan must be on the table, including substantial reductions and stricter standards for performance. Most of all, U.S. policy toward Pakistan must proceed from the realistic understanding that certain actions of Pakistan’s military are contributing to the death and injury of our men and women in the military and jeopardizing our national security interests.

“In light of what could be an entirely new relationship with Pakistan, the United States and our allies must develop contingency plans to ensure the continued logistical support necessary for our military operations in Afghanistan.”

In addition to how generally inappropriate it is for two minority party Senators to be issuing their own set of demands to a country with whom relations are endangered and fluid, several other parts of the statement stand out.

First, it is almost humorous how McCain and Graham have to refer to being kicked out of the Shamsi air base in Pakistan, as they can’t officially acknowledge that this is a site where the CIA has been operating drones.  Instead, they have to say that Pakistan ” has ordered U.S. intelligence officers to leave the country and disrupted their work on important national security matters”. I guess that last part should be said with an “If you know what I mean” like they used to say on Whose Line Is It Anyway so that we can look for the hidden reference to CIA drones.  And just whose national security are these drones protecting?

Finally, this was the first time I had seen reference to the story apparently “broken” in October when we learned that 80% of the IED’s in Afghanistan are produced using fertilizer manufactured in Pakistan.  It’s very difficult to see how Afghan farmers will be expected to get by if the US decides that they can’t have access to a basic fertilizer like calcium ammonium nitrate from the closest sources because some of it is diverted to bombs.

Perhaps folks like McCain and Graham would be more helpful if they spent some time trying to come up with policies that would encourage conventional uses of fertilizer instead of improvised ones.