Last Friday, DHS’ Inspector General released two reports purportedly written in response to an April 28, 2011 request from Zoe Lofgren to determine whether Immigration and Customs Enforcement and DHS more generally were lying about the Secure Communities program, and if so, if doing so was criminal.

As a threshold matter, the completion of two reports, rather than just the one, seems to be a bit of a smokescreen. Lofgren asked if government officials lied. In response, DHS’ IG decided to answer two questions:

In addition to reframing Lofgren’s question to avoid fully considering why people had misinformed Congress and localities (and also, given the scope of their work, to avoid inquiring whether DHS, rather than ICE, had decided to do so), DHS IG first decided to see whether Secure Communities was effective. According to the list of major contributors included with each report, with the sole exception of Communications Analyst Kelly Herberger, two entirely different teams conducted the reviews. The report that at least sort of responded to Lofgren’s questions was issued on March 27, whereas the non-responsive efficacy report was issued April 5, though both were apparently sent out Friday together. ICE responded to both reports on the same day–February 23, 2012–so it seems the different release dates comes because the efficacy report was revised in some way (the date on the conveyance letter for the efficacy report is in a non-standard sans serif font, which sort of makes you wonder…).

In short, the submission of these two reports together stinks, though it presumably had the desired effect, as the NYT reported “mixed reviews” for Secure Communities. HuffPo and LAT were less compliant, focusing instead on the communications report instead.

That said, the purported “good” efficacy report doesn’t actually prove that Secure Communities is working all that well. Here’s the summary of their results:

We performed this audit to determine if Secure Communities was effective in identifying criminal aliens and if Immigration and Customs Enforcement appropriately prioritized cases for removal action.

One of the ways they quantify that success is with a claim that they had identified 692,000 “criminal aliens.” 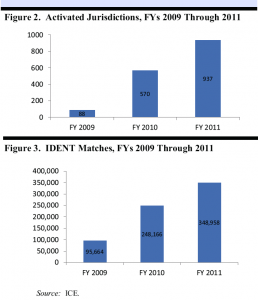 Now, the graphics they provide to back up this claim do show 692,788 “IDENT” matches in the last 3 fiscal years.

Never mind that the program has become less efficient over the years. In FY2009, ICE had 1,087 fingerprint matches for each activated jurisdiction, in FY2011 ICE had 372 matches. To some degree that’s expected–jurisdictions along the southern border joined in first–but  also suggests getting every jurisdiction in the country involved has diminishing returns.

More troubling, the report also reveals that some of the people–it doesn’t say how many–in IDENT are citizens.

Individuals with fingerprints in IDENT include persons with an immigration history, such as aliens who have been removed but have reentered the country, immigration visa applicants, legal permanent residents, naturalized citizens, and some U.S. citizens.
IDENT includes two categories of U.S. citizens:

In any case, compare the 348,958 fingerprint matches last fiscal year with the number the LAT gives–but this report does not–and it’s unclear whether the ICE’s stats are as good as they say they are.

Nearly 217,000 people convicted of felonies or misdemeanors were deported last year, an 89% increase since 2008, according to ICE.

These may be for different time periods (fiscal versus calendar year), but in any case this says perhaps as few as 62% of those identified are actually deportable criminal aliens (I’m gong to try to get some clarity on this issue).

But the IG report seems to suggest it’s even lower than that. The IG reviewed the resolution of 766 Secure Communities cases. No only did it show that only 91% were found to have been dealt with properly, but it also showed that just 48% of those reviewed ended up being properly deported.

As broken down, the review shows that just over a third of those whose cases were reviewed are illegal aliens guilty of a serious crime (what ICE calls a “Priority 1 crime,” which includes things like murder and serious drug charges). Over 12% of those deported were guilty of less serious crimes–including misdemeanors as minor as disturbing the peace–or, it appears, just undocumented status. 11.5% of the people they’re conducting two reviews of (they do this because of yet another computer contractor who can’t do what we’ve paid them to do, resulting in the need to review all these matches twice) are US citizens–those people who have become citizens or–worse!–adopted a baby from China (which may mean that almost 80,000 Americans have been reviewed for deportation under Secure Communities). And almost 9% of those reviewed either ICE has no idea what happened to them (because the reviewers didn’t annotate the record) or were improperly resolved.

This report supposedly declares Secure Communities to be a success but–if you assume the 3.3% erroneous resolution carried over to the 692,788 matches they’ve found–suggests that 22,862 have been improperly resolved, which given there’s a separate category for undocumented people with no criminal record who were deported, seems to suggest were improperly deported.

And all that’s before you consider the impact of Secure Communities on community policing because it makes illegal aliens and those who might be mistaken as such less willing to work with the cops.